Banks have slashed interest rates to barely above zero on billions of dollars worth of savings held by ordinary Australians as they rely on increasingly cheap cash for their lending needs.

As the Reserve Bank considers a further cut in the official cash rate by the end of the year to just 0.1 per cent, the nation's commercial banks are offering in some cases just 0.01 per cent on a basic savings account. 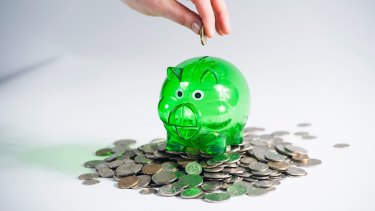 Savings rates across all banks have fallen to just above zero, partly due to extremely cheap funding costs locally and overseas.Credit:Josh Robenstone

The RBA, which meets next Tuesday just hours ahead of the release of the federal budget, has cut official interest rates by a full percentage point since July last year.

It took the cash rate to 0.25 per cent in March while embarking on a range of other initiatives including the extension of up to $200 billion in cheap credit to commercial lenders in a bid to reduce borrowing costs on banks.

But the banks have also moved to reduce their own costs in other ways, led by deep cuts in their savings rates.

All of the major banks have cut their general or introductory savings accounts as well as their term deposit rates over recent months. The average rate on a three-year term rate is now a record low 0.87 per cent.

Financial information firm Canstar found people would have to micro-manage their savings to qualify for bonus rates or move their money to another institution every few months to earn introductory rates.

The firm's group executive for financial services, Steve Mickenbecker, said with the RBA slashing overall funding costs, the nation's banks did not have to offer high savings rates to attract customers.

"Banks are under less pressure to raise funds from savers and we have seen savings interest rates continue to slide through the pandemic. Perhaps that's an unanticipated consequence of the measure to fund business through the crisis," he said.

Banks have also reported a lift in savings as consumers have sliced their spending. The household savings ratio last quarter reach its highest level since 1974.

Financial markets put the chance of a further cut in the official cash rate next week at two in three.

Apart from cuting the cash rate to 0.1 per cent, analysts believe the RBA will take other lending rates as close to zero as possible.

TD Securities' senior Asia-Pacific rates strategist Prashant Newnaha said while expectations were strong for a rate cut, the bank may hold fire until it sees the size of stimulus likely to flow from the federal budget.

"In our view the main benefit the RBA would obtain from waiting till then would be clarity on federal and state budgets to help it calibrate its quantitative easing program," he said.

Capital Economics senior strategiest Marcel Thieliant said a rate cut plus an increase in government bond purchases next week would send a strong signal the RBA was doing everything possible to support the economy.

But there was a risk it could hold back a month because of the federal budget.

"Announcing additional government bond purchases at a time when the government is unveiling record-high budget shortfalls may create the impression that the bank is monetising the deficit," he said.

Hans-Dieter flick: I Hope Alaba will sign a contract with Bayern. Our club is one of the best in the world
Diego Maradona: Messi gave Barca everything, brought them to the top. He was not treated the way he deserved
Federico Chiesa: I hope to leave my mark in Juve. We will achieve great results
The Coach Of Benfica: I don't want us to look like the current Barcelona, it has nothing
Guardiola on returning to Barca: I'm happy at Manchester City. I hope to stay here
Fabinho will not play with West ham due to injury
Ronald Koeman: Maradona was the best in his time. Now the best Messi
Source https://www.smh.com.au/politics/federal/banks-slash-savings-rates-on-back-of-cheap-rba-cash-20200929-p560b4.html?ref=rss&utm_medium=rss&utm_source=rss_feed