Beginning of the end: Brown tells Warriors he won’t commit to Auckland move

Nathan Brown’s time as Warriors coach appears to be approaching its final phase after the coach informed the club that he could not commit to a long-term relocation to Auckland.

Sources with knowledge of discussions told the Herald that Brown has informed Warriors powerbrokers that personal reasons will keep him from basing himself permanently in Auckland to fulfil his duties. 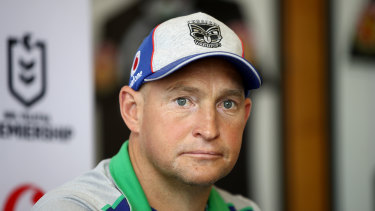 Nathan Brown’s days at the Warriors are numbered.Credit:Getty

The club is now faced with a decision to try and secure a coach who can commit to the long-term future of the club, or stick with Brown knowing his role has a use-by date.

The Warriors are due back in New Zealand in a fortnight’s time to play their first game at home in more than two years due to COVID-19 restrictions.

Brown is available now to return to New Zealand and has committed to coaching the club for the duration of his contract. That is due to expire at the end of the 2023.

However, the club is aware he won’t be able to coach in New Zealand beyond that time. Brown is understood to have been open with the club, telling them of his predicament over the past fortnight.

The former Newcastle and St George Illawarra coach has a very close relationship with Warriors owner Mark Robinson and chief executive Cameron George. Any decision to part ways is expected to be amicable.

Brown has been under pressure in recent weeks given his team’s recent poor form, slumping to five straight losses with their heavy defeat to Manly on Saturday night.

The Warriors now find themselves in 14th position with four wins from 13 games. Brown, who took over as coach last season, has been away from his family for almost two years. It’s the same sacrifice a lot of Warriors players have made in recent years.

The Warriors trained out of the Central Coast last year before relocating to Redcliffe in Queensland in 2022.

The likelihood of Brown and the Warriors parting ways at some point in the near future will add further intrigue to the coaching merry-go-round.

Trent Barrett was the first to lose his job this year, while Wests Tigers coach Michael Maguire remains under pressure to get results at the club. There’s also concern brewing on the Gold Coast given Justin Holbrook’s inability to get the Titans firing.