Believe the hype: Why Cameron Ciraldo is the NRL’s most wanted man

Cameron Ciraldo had a mediocre career as a player in the NRL and has coached seven top-grade games but, if you listen to all the hype, you would be forgiven for thinking he is the next Wayne Bennett or Craig Bellamy.

The New Zealand Warriors and Wests Tigers this week joined Canterbury in the hunt for a new head coach – and Ciraldo’s name is on everyone’s lips. He was widely linked to the Cronulla job last year, along with other coaching jobs in recent times.

But exactly what is it that makes the Panthers assistant coach the NRL’s most wanted man?

The fresh-faced 37-year-old has quickly gained a stellar reputation.

To be fair, he has done his coaching apprenticeship at Penrith, a powerhouse club enjoying some wonderful and deserved success on the back of the NRL’s most gifted group of juniors, including Nathan Cleary and Jarome Luai.

But, can all the good judges trying to lure him to their NRL club be wrong when it comes to the coaching potential of the former Cronulla, Newcastle and Penrith forward, who was forced into early retirement because of injuries before he was 30? 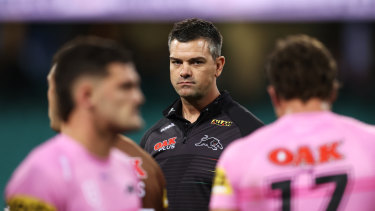 Cameron Ciraldo has been linked to the vacant head coach roles at the Bulldogs, Tigers and Warriors.Credit:Getty

Tigers head of football and premiership-winning coach Tim Sheens doesn’t even know Ciraldo, and is yet to speak to him about the top job at Leichhardt, but has been around long enough to spot talent from afar.

“I want to stress there are a number of candidates we’re looking at [to replace Michael Maguire, who was sacked on Tuesday],” Sheens told The Sun-Herald. “I don’t know Cameron, and I’ve never sat down and met him face to face. But if you’re asking me about Cameron, I guess what stands out about Cameron is his attitude towards developing younger ones, and his background in doing so.

“That’s not to say he can’t work with senior players. There are already quite a few senior players at Penrith who have indicated they love working with him. I think it’s the harmony within that club, and when you’re an assistant coach, you have a fair bit to do with that.

“What also appeals for us is he’s open-minded to the way the game is played. Penrith play a good open style of footy, and he has some input into that. I’m taking nothing away from Ivan [Cleary] or the coaching staff there. 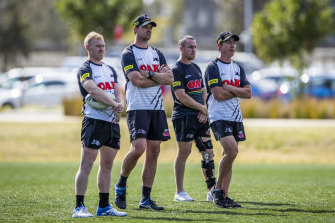 “He comes from an environment I like the look of, and he’s been in a system that has enjoyed consistent success. They’ve only won the one NRL grand final, but all things being equal, they will compete deep into the finals series at a high level again.

Ciraldo is one of the best-paid assistants in the NRL and Penrith want to keep him on board beyond this season when his contract expires. Who would seriously want to leave the foot of the mountains when the Panthers can be a premiership force for years to come?

Ciraldo has five young children, so there is little appetite to leave Sydney.

He gave fans a snapshot of what he was capable of at the end of 2018 when parachuted into the top job following Phil Gould’s ruthless sacking of Anthony Griffin a month out from the NRL finals. Ciraldo was set to quit the Panthers twice while Griffin was in charge, only to be talked out of it on both occasions by Gould.

His first game in charge was on the Gold Coast when Nathan Cleary slotted an 84th-minute field-goal to get the Panthers out of trouble.

He introduced loud music at training sessions to try and emulate the game-day noise players had to contend with, and quickly welcomed a few club greats back into the fold, including Royce Simmons and Greg Alexander, two legends used sparingly by Griffin.

Alexander said Ciraldo was more than ready for an NRL head coaching gig, and was immensely popular with players.

“He’s very calm, players like him, but they like him for the right reasons, not just because he’s a good bloke,” Alexander said. 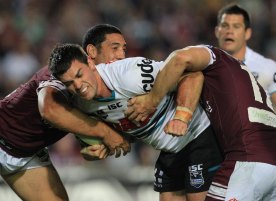 Cameron Ciraldo in action during his playing days at the Penrith Panthers.Credit:Steve Christo

Ciraldo played for Italy and then later coached them at the 2017 World Cup. The first week was marred by a fight between James Tedesco and Shannon Wakeman in a Cairns pub. Ciraldo made sure Tedesco, a superstar of the game even then, and Wakeman sorted out their differences so there were no issues moving forward.

That same week in Cairns, Ciraldo was aware young Panther Tyrone May was struggling back home after under-going knee surgery, and made a point of getting him to far north Queensland to be around a team environment and lift his spirits.

Anthony Minichiello was on that same tour, and is a Ciraldo fan.

“He’s a respected bloke, and when you have the respect of someone, you want to play for them and do the best you can,” Minichiello said. “He’s so calm and collected, but someone who has the right amount of assertiveness.”

James Tamou, the former Panthers skipper, now at the Tigers, told the Herald during the week how he would love to see Ciraldo at Concord, but feared he would stay put at Penrith where he had it so good.

Pressed on what made Ciraldo top-class coaching material, Tamou said: “I came into that team when I was 27 or 28, and I was still learning new things from ‘Ciro’. I’ve also never seen him blow up.”

Craig Fitzgibbon wanted Ciraldo as his assistant after he was appointed head coach of Cronulla early last year. Fitzgibbon had completed a lengthy apprenticeship at the Roosters, but remained friends with Ciraldo after they worked together with the Country Origin team. They lost both years to City, but both men took the losses as valuable lessons and a “kick up the arse”. They still speak regularly.

The Panthers’ sheds erupted last year when it emerged Ciraldo had passed on the Sharks and Fitzgibbon to stay put. There will be plenty of rivals hoping he has second thoughts this time around.