This week, the Morrison government suddenly found itself locked in a series of high risk skirmishes that could have significant implications for the business community.

There's a bare-knuckled brawl over the future of the nation's $3 trillion retirement savings industry that could reshape the financial services sector; and the attempt to rein in global technology giants that could set an international precedent. But by far the biggest and most significant fight involves Australia's largest trading partner China. And it is showing no signs of being resolved anytime soon. 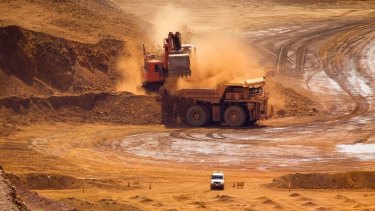 On Friday, Chinese authorities slapped tarriffs of up to 200 per cent on Australian wine exports. It was a rude shock for the viticulture industry, which was already hit by a trade strike earlier this year. It was also a cruel blow for Treasury Wine Estates, the ASX listed maker of the famous Penfolds and Wolf Blass labels, shares of which tumbled 11.5 per cent before being placed in a trading halt.

Diplomatic tensions between the two countries have been escalating for months. Beijing is furious about Canberra's call for an independent inquiry into the origins of the coronavirus, its moves to crack down on political interference by Chinese nationals, and an earlier ban on telco vendor Huawei from supplying equipment for 5G networks and the NBN.

In retaliation, China has targeted a range of Australian export industries with sanctions. They have mostly been soft commodities exports, but coal has been in the firing line and there is a belief copper could be next. Importantly, the business sector is broadly supportive of the government's approach to stand up to China on matters of principle.

The one industry China is yet to touch, though, is iron ore. If it were to do so, the relative calm about the situation in corporate Australia would surely dissipate, and quickly.

The key steelmaking ingredient is Australia's most lucrative export earner. At the moment, there is a prevailing belief that China can't afford to boycott Australian supply as it ramps up infrastructure projects to prop up its economy in the aftermath of the pandemic.

Yet Chinese state-owned enterprises are rapidly moving to diversify their sourcing through ambitious projects in various parts of the globe, most prominently Africa.

Unless things improve dramatically on the diplomatic front, Australia is going to need to diversify its economic reliance on China just as quickly.

November to remember for stonks

It has been a November to remember for stocks (or "stonks" as the internet meme ridiculing the ebullience of equity markets describes them).

The major US equity indices hit fresh highs this week, and with two trading sessions left in the month the local S&P/ASX 200 is on track for a record month after adding as much as 15 per cent.

Remarkably, that means the local benchmark is back to where it started the year, and just a smidgen below its record peak set in February before COVID-19 erupted into a fully-fledged global pandemic.

Investor spirits have clearly been lifted by the encouraging news about three COVID-19 vaccine candidates and the prospect of more political stability in the United States.

Balanced against this is the alarming resurgence of the coronavirus in the US and Europe and the massive debt overhang that advanced economies including Australia will face when the pandemic is eventually behind us. Not to mention the ongoing trade spat with China.

The strength of share prices in Australia around the world this year serves as a useful reminder of one of the great investing truisms: the stockmarket is not the economy.

For starters, share prices are forward-looking (that said, the future doesn't look terribly bright at the moment).

The businesses that are publicly listed often don't reflect the underlying economies where they are listed. In the US, Wall Street and Main Street have de-coupled to the point where the stockmarket is arguably no longer a useful proxy for the world's largest economy. Small businesses power most developed economies, but they aren't really represented on stock exchanges.

In Australia, there are also disparities. Mining is over-represented on the local bourse (it accounts for nearly 20 per cent of the ASX 200) relative to the number of people it employs (under 2 per cent of the workforce).

One of the more encouraging developments for both the stock exchange and the real economy in recent years has been the revival of the Australian agriculture sector.

After a horror, bushfire-afflicted summer last year, farmers in many parts of the country are preparing for bumper harvests, while livestock prices are also strong. Meanwhile, there are now a handful of genuinely interesting and substantial agribusiness stocks on the ASX for investors to consider.

There is no better example than Bega Cheese. The $1.1 billion, ASX listed dairy business based in a sleepy town on the NSW South Coast has now become a genuine force in Australian food manufacturing with the purchase of the Lion Dairy business for $534 million.

The deal will add the Pura Milk and Yoplait brands to Bega's portfolio, which includes Bega Cheese and Vegemite (the latter of which it acquired for $460 million in 2017).

Bega now expects to generate $3 billion in annual revenue and will become one of the biggest suppliers to the major supermarket chains. As Elizabeth Knight wrote this week, it is good news for the government which is hoping to strengthen local manufacturing of essential goods after the coronavirus exposed our vulnerability to global supply chain shocks.

On the other hand, it adds more fuel to the fire of the original topic of this article. After all, there is one key reason why this deal happened: Treasurer Josh Frydenberg blocked a planned $600 million purchase of the Lion business by China Mengnui Dairy on national interest grounds last year.

Mandzukic on Milan and Zlatan: It is important to instill fear in your opponents. We have a lot of experience
The football Association of the Czech Republic said that Bican 821 scored a goal. Ronaldo has 760
The youngster is Interested in Arsenal lease. He decides together with his family
Against Barcelona in the Cup - a small Catalan club that has already knocked out Atletico. Here we picked up and launched the career of Alba
Aguero has contracted the coronavirus
Pogba on the 1st place in the Premier League: Manchester United is still far from the trophy. This is not enough
Rebic and Krunic recovered from covid, Theo has a false positive test
Source https://www.theage.com.au/business/companies/best-of-the-business-week-china-strikes-again-a-november-to-remember-on-asx-bega-s-new-era-20201127-p56ijg.html?ref=rss&utm_medium=rss&utm_source=rss_feed

Brisbane's restriction rollback: What you can and cannot do

River Derwent ‘Looks More Like an Ocean’ Amid Flooding in Derbyshire

‘A STRONG AMERICA’: Bold US move that will impact all Australians

11 creepy sights no one told you about

The enormous leg-up in Australian Open preparation for biggest stars

'Fearful of retirement': Warren to make call on future in coming weeks

Your Daily Horoscope for Friday, January 22

'A huge uptick': unexpected opportunities that opened during the pandemic

Bordering on self-harm: a closed Australia has proctected us, but our door must open sooner or later

'To see others in pain, it is not natural': The mental health toll of first responders

Welcome to the HQ of exercise, by a survivor of hotel quarantine

Our enfeebled councils: the arm of government closest to the people is powerless to act for them

Why populism may grow, despite Trump's departure

Snow Falls Amid Flood Warnings in Wake of Storm Christoph

It is time to take toxic heat out of politics

COVID-19 jabs to be rolled out in Queensland hospitals, workplaces

Arnold: Olyroos can medal in Tokyo

A theory of masks and more tales of subterranean Sydney

What is the point of a half-baked Olympics?

Barring 'miracle', this weekend will be Queensland Maritime Museum's last

'I was viewed as a pirate': Sandgren on becoming face of Open COVID chaos

NSW pushes for South Pacific travel bubble, but federal government says there is 'no timeframe'

'We are out now': More refugees released from hotel detention in Melbourne

Chinese buyers back in talks for $16b Woodside LNG project

'Tough grader': being first lady is a second job for Dr Jill Biden

Thompson looks for a little magic from Chat in Carrington Stakes

Neasham looks to break Sydney Saturday duck ahead of carnival

Another legend in the making for Bridge and McEvoy

Return to glory? Why Pike has taste for the All-Star

Amaysim shareholders give thumbs up to Optus takeover

Meghan's former aides ready to give evidence in privacy case