Blockbuster shows won't go on without easing of social restrictions

Producers of the three blockbuster musicals set to open in Australia have confirmed their shows won't proceed if social restrictions aren't lifted to the point where they can play to full houses.

The producers of Frozen, which pushed its Sydney opening date from July to December; Hamilton, which is set to open in Sydney in March; and Moulin Rouge, which is pegged to the middle of 2021 in Melbourne, all confirmed their productions are on track but will require a full easing of social restrictions for the shows to be viable.

Hamilton producer Michael Cassel said unless the restrictions introduced to combat coronavirus, such as the cap on the number of people allowed at indoor gatherings and enforcement of the four-square-metre rule, were rolled back, it wouldn't make commercial sense to go ahead with the Pulitzer Prize-winning musical at the 2000-seat Lyric Theatre.

"Any production of this scale has to be able to play to capacity," he said. "It's just not viable to be playing to a reduced capacity. So if that's the case, everyone will have to take stock and come up with a plan B. Our approach to opening in March is with a fully sold-out audience," he said.

Cassel said he was confident restrictions would be eased by the time the show opens and that his company is moving through the pre-production phase with the March opening in mind. Fortunately, the bulk of the auditions had already been conducted before social restrictions were introduced and offers have been made for 24 of the 34 roles in the show. 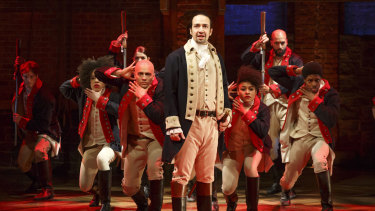 An Australian production of the hit musical Hamilton is due to open in March.Credit:Joan Marcus/The Public Theater via AP

“The remainder of the auditions are being conducted by Zoom workshops and one-on-one auditions,” he said.

Moulin Rouge, which has been shuttered on Broadway, was in a similar position, with some auditions already having been conducted and others happening online. The US creative team had been due to arrive shortly before the lockdown began in Australia to inspect the Regent Theatre, but that inspection was held online.

“It has been a real revelation that it can be done and keep the process going,” the show’s producer Carmen Pavlovic said. “As we are replicating an existing design, we can build a model that is specific to the Regent and get that costed and begin building it when we reach that point.”

But she agrees the tick of approval from government and health authorities for people to gather in full houses will be essential for the show to go ahead. 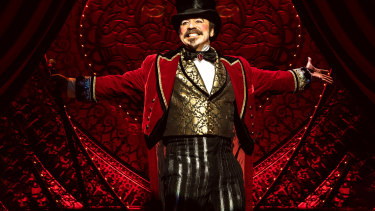 Danny Burstein as Harold Zidler in the Broadway production of Moulin Rouge! The Musical.Credit:Matthew Murphy

"It doesn't make economic sense unless the costs of running the show halved correspondingly," she said. "I don't think it would be an overly enjoyable experience for the audience."

Disney has confirmed playing to limited capacity houses did not make financial sense nor would it be an ideal experience for audiences. However, the company's production of Frozen is perhaps in the best position to raise the curtain given the entire casting process was completed before the lockdown.

The organisation recently announced the Broadway production of the show would not re-open when theatres are allowed to operate in New York, freeing up costumes and sets for other productions around the world.

Disney Theatricals president Thomas Schumacher said the decision to move the show’s opening by five months presented enormous challenges, but he is confident it was the right decision to make. 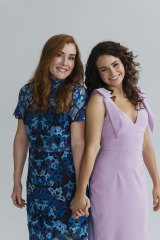 Casting was completed for the Australian production of Frozen with Jemma Rix and Courtney Monsma landing the lead roles.Credit:James Brickwood

"In fairness, it is very complicated to do that and, in fairness, we haven't achieved it yet but the good thing was the enthusiasm of the audience saying, 'Yes, we want to see it' and, 'Yes we are happy to wait'. We will be ready to roll, I hope, in December but there are some quarantine issues we are going to have to work through," he said.

"We were never going to cancel; that would have been devastating."

Producer John Frost was on the verge of starting rehearsals for Dolly Parton’s 9 to 5 The Musical when theatres were shut down in March. He is not planning on remounting the musical until July next year and will only do so if he can be guaranteed a full house. "The biggest problem we've got, or will have, is social distancing," he said. "If you [usually] play 2000-seat theatres, you can't make any money if you play to a 700-seat theatre. That's the big sticking point – if they let us play to full capacities, great, that will solve a problem."

Musicals generated $400 million in 2018, according to Live Performance Australia, while attendance was estimated at 3.9 million people, 14.9 per cent of the industry total.

Chelsea is the leader in the fight for Werner.&nbsp;The player must sign a contract until 2025, the salary is 10 million euros a year
Jerome Boateng: Children are not born racists. It is important to teach them that racism is unacceptable
Tottenham believes that it may not receive 200 million pounds by June 2021. The club took out a loan of $ 175 million. Tottenham used the state loan system
Manchester City fans will display banners in the city about UEFA-Power, corruption and lies, UEFA-the mafia. Decomposes football since 1954
Raul can lead Schalke
The final of the Hungarian Cup showed what will happen if you now launch fans into the stands
Higuain injured a thigh muscle in training
Source https://www.theage.com.au/culture/musicals/blockbuster-shows-won-t-go-on-without-easing-of-social-restrictions-20200522-p54vk5.html?ref=rss&utm_medium=rss&utm_source=rss_feed

US navy man held in Iran since 2018 freed

George Floyd protests LIVE: Minneapolis to hold memorial service as protests continue across the US

Country admits it got COVID-19 wrong

Why a Queensland TAFE-trained nurse can pay $14,000 more than in Victoria

V'landys versus Berejiklian in stadium showdown

'I could have handled it better': Holmes opens up on Cronulla exit

What kind of man only works part time?

Quiet Australians must speak up to end racism

The case for a public service pay freeze: ask what you can do for your state

Your Daily Horoscope for Friday, June 5

Banking on gas will leave us stranded

The larger than life newsman with a big-hearted talent

Pandemic has impacted women most significantly

'Futures program' takes the angst out of career planning

Jaw-dropping Sydney castle has its own turret

Anakie sale wrapped up in a week after 11 separate offers

Man With Knife Shot by NYPD in East Village

If only the HomeBuilder policy lived up to the politics

US race-based protests have turned the ‘collective against the individual’

MP Cradles Baby While Speaking in House of Commons Debate

Footage of police wrongdoing nothing new for African Americans

From the Archives, 1935: Footscray - the mother of Melbourne?

Helicopters Circle Over Brooklyn After ‘Unprovoked’ Attack on Police

This is Australia’s best sausage roll

'They had nothing': Broncos lashed after Roosters serve up 59-0 hiding

Victoria has ‘rules for some and rules for others’

Best places to stop for a sausage roll

Lions in NSW zoo attack won’t be put down

Does anyone really want to have 20/20 vision anymore?

Protesters must ensure they tread a safe path

Protesters' cause is just, but it is vital they tread a safe path

'I was paying my respects': Terry Lamb on his NRL biosecurity breach

No more spin: McLeod calls for culture change at Crows

'These laws were a long time coming': Trad vows to protect abortion reform

'Knocking on your door': Probe into fatal hit-run on Princes Hwy

‘WILL GET BRIGHTER’: How you can survive the Australian recession

In the West ‘authority is weaker than ever’