Blues train rolls on with win over Gold Coast

On the way to Saturday's clash between Carlton and the Gold Coast Suns, a Blues fan noted his club were unbackable favourites and wondered aloud when the last time that occurred.

The answer was in this same match-up last season and his mate responded with "I bet we lose".

Gold Coast have their detactors but there is talent and the hint of a bright future but their bodies, minds and overall maturity needs much work.

Carlton's 5-12 [win-loss] record may not deserve it but the Blues' attendance sits well into the top-five so far and a crowd of 31,765 turned up to see Saturday's win strongly beating the predicted crowd of 18,000. 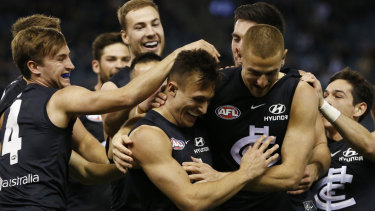 Blues interim coach David Teague again showed he is a worthy candidate to take charge of the side as Ed Curnow (31 possesions), Sam Walsh and Marc Murphy again starred on the ball yet again while Jack Silvagni, Matthew Kennedy and Sam Petreski-Seaton impressed in their roles.

Touk Miller, Will Brodie, Brayden Fiorini (32 possessions), Alex Sexton and Pearce Hanley kept asking questions for the Suns but on the whole the Blues had too many good finishers in a relatively free-flowing game.

Despite the Suns bad display against Adelaide last round, the visitors came out with great intent against the Blues as goals to Darcy Macpherson and Michael Rischitelli had them ahead in the first 15 minutes.

But maintaining their best play has been an issue for the Suns all season and it reared its head late in the term as the Blues kicked three goals and had a miss after the siren to lead 32-15 at quarter time.

That lead would remain throughout and grow as the game went on, most impressively for the Blues was they held a 24-point lead at half time despite star midfielder Patrick Cripps having just six disposals after being crunched in a tackle in the first term.

The Blues were on fire to start the third term as goals Harry McKay, Josh Deluca and Cripps all kicked goals and Kennedy kicked his third goal pushing the lead past 40 points. 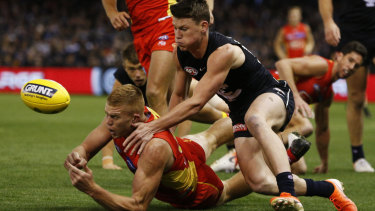 But the Suns responded in the middle as Miller, Brodie and Fiorini took charge in midfield and key forwards Peter Wright and Ben King began making an impact.

In quick time they kicked five goals to one to end the term cutting score to 84-66 at the final change.

The Suns couldn’t maintain their charge and the Blues again took charge in the last term as Kennedy kicked his fourth and the home side took charge around the ground.

There is clear intent from the Suns and plenty of promise but they need time and older bodies around them.

The Blues have both young talent and older bodies, in this last part of the season they need to pin their ears back and seize their opportunities.

If they can do that the odds will be in their favour far more often and it won't shock anyone.

Carlton players made sure Blues first-gamer Josh Deluca would never forget his first goal for the club.

Early in the third term Deluca won the ball on the left side 45-metres out and went back and slotted a goal.

In the seconds before he was mobbed by teammates, Deluca touched the black-arm band he was wearing for his aunty, who recently died, pointing to the sky as every Blues player descended upon him.

NOT SO KING HIT

Suns teenager Ben King has plenty of promise but his lost his cool during the second term.

King appeared infuriated by the close checking of Lachie Plowman so hit him hard with an elbow to the midriff then turned and appeared to throw a punch in direction of the Blues backman.

But Plowman ducked out of the way and King's teammate Michael Rischitelli was caught in the cross-fire taking a hit to the face.

To make matters worse the a free kick was given against King for his conduct.

This is the best Milan in years: superkambekom with Juve (3 goals in 5 minutes!) saved the intrigue in Serie A
Zlatan Ibrahimovic: I am the President, player and coach! If I had been in Milan since the start of the season, we would have taken the scudetto
Sarri on the defeat by Milan: we played first-class football for 60 minutes. Then-turbidity
Pioli on the victory over Juve: Milan became a team. We can play even better
Pioli beat Juventus for the first time as a coach
Vardy has scored 10 goals for Arsenal in Premier League matches. Only Rooney has more
Ronaldo scores or gives an assist in 17 consecutive Serie A matches, where he scored 25 (21+4) points
Source https://www.smh.com.au/sport/afl/blues-train-rolls-on-with-win-over-gold-coast-20190720-p5292w.html?ref=rss&utm_medium=rss&utm_source=rss_feed