Bolton says Trump not fit for office, lacks the 'competence' to be President

President Donald Trump is not "fit for office" in part because he was solely focused on his political fortunes, former national security adviser John Bolton said in an interview with ABC News.

"I don't think he's fit for office. I don't think he has the competence to carry out the job," Bolton said in a portion of the interview that aired Thursday. 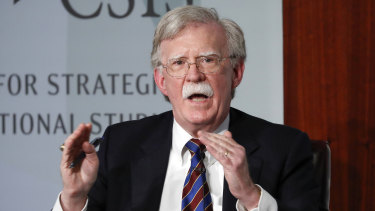 "[Trump] was so focused on the re-election that longer-term considerations fell by the wayside": Bolton.Credit:AP

Bolton's tell-all memoir is a withering criticism of Trump's leadership as president by a man who served as one of his closest advisers. It alleges that Trump asked Chinese President Xi Jinping to help him win re-election by buying more US farm products, one of many examples that Bolton says the House could have investigated in its impeachment probe.

"There really isn't any guiding principle that I was able to discern other than what's good for Donald Trump's re-election," Bolton said. "He was so focused on the re-election that longer-term considerations fell by the wayside."

Trump on Wednesday accused Bolton of breaking the law by trying to publish the book, which the President said contains classified information. The Justice Department sought an emergency restraining order to block its publication.

"He broke the law, very simple. As much as it's going to be broken," Trump told Fox News host Sean Hannity in an interview on Wednesday night. "This is highly classified."

In a separate interview on Wednesday with the Wall Street Journal, Trump defended his handling of China and other nations while dismissing several of Bolton's allegations as coming from a "crazy" person and a "liar."

Bolton writes that Trump gave Xi his blessing during last year's Group of 20 summit to build detention camps to house Uighur Muslims, an example of how the former national security adviser said the President valued a trade deal at the expense of human rights and the US's national interest.

"That's not true," Trump said of Bolton's description of his conversation with Xi.

Trump pointed out he signed legislation on Wednesday that could lead to sanctions against China over the camps. The signing was announced soon after excerpts of Bolton's book were published by news outlets on Wednesday.

"I could have killed that very easily," Trump told the Journal.

But the President did not deny Bolton's claim that he wanted to lift penalties on major Chinese companies in order to curry favour with Xi during talks over the phase one trade agreement.

Bolton writes that he and other advisers persuaded Trump to reimpose a ban on Huawei from doing business with US companies, after Trump offered to reverse criminal prosecutions against the company.

"Nobody has ever been so tough on a company as I have to Huawei," Trump said.

Trump also said ZTE Corp. was hit with a $US1.3 billion penalty as well as changes to its board, even though he pulled back on harsher punishments over allegations it violated US sanctions on Iran and North Korea.

"ZTE was my deal," Trump said. "It was an unbelievable deal."

But Bolton said Trump's desire to place his personal interests ahead of the country's extended to his dealings with other world leaders, including North Korea's Kim Jong-un.

A longtime North Korea hawk, Bolton hammered Trump over his decision to meet Kim last June in the Korean demilitarised zone before Pyongyang had taken significant steps to dismantle its nuclear program.

"So if he thought he could get a photo opportunity with Kim Jong Un in the demilitarised zone in Korea, there was considerable emphasis on the photo opportunity and the press reaction to it and little or no focus on what such meetings did for the bargaining position of the United States," Bolton told ABC.

Arteta on the absence Gendusa in the application: Some things should change, but they don't
Klopp on the championship corridor from city: I don't need it. We don't celebrate events from a week ago
Inter will announce the transfer of Hakimi after the end of the season
Zidane on Hames' words about Real Madrid: I understand him. He wants to play more, which is normal
The environment of Grisman outraged by the behavior of leopards. They believe that Messi can change the situation
CEO akhmata about Glushakov: We are happy with it. We will discuss the future at the end of the season
Arteta Pro 4:0 with Norwich: Arsenal are moving in the right direction
Source https://www.smh.com.au/world/north-america/bolton-says-trump-not-fit-for-office-lacks-the-competence-to-be-president-20200618-p55441.html?ref=rss&utm_medium=rss&utm_source=rss_feed

The man from the right who dished the dirt on Trump

Afterpay and Tesla - the stocks that divide the market

Chinese military has links to supplier of 5G equipment in Australia

Is Ben Brown a one-trick pony? How Roo can put the fear factor into his game

What is Modern Monetary Theory and is it THE answer?

In the 32 years since they were formed, the Broncos have rarely got things this wrong

Dozens dead in landslide at Myanmar jade mine

'Make sure he leads and don’t look back': O'Hara to set Spaceboy free

CBA confirms future of startup Beem It under review

Local containment model ‘most likely’ to be effective: Health Minister

Capacity crowd the aim, Victorians invited to The Everest: V'landys

‘That Thing is Definitely Cooking’: Tornado Touches Down in Kismet, Kansas

Why I lie about sex dreams with my ex

Woolies in isolation and customers warned after COVID test

Ways to build stronger calf muscles with or without a gym

US court sides with publisher of explosive book by Trump's niece

Volunteer groups get cracking in face of COVID challenge

‘Some of those people will die’: Stark reality of state’s virus spike

'Whatever it takes': Rebels vow to hang tough despite COVID-19 exile

Reporter mugged at knifepoint on air

Neurosurgeon Tim Steel found not guilty of assaulting his wife

Kathmandu pessimistic about recovery, despite sales surge after lockdowns

Hi-ho, Silver: Trump says he looks like Lone Ranger in a mask and likes it

Letting Victorians into Queensland would be 'reckless': Deputy Premier

The language of tween fashion according to The Babysitter's Club

Economic recovery a ‘chance’ to ‘lay foundations’ for tax reform