The Brisbane Broncos have been decimated by injuries to top-line stars after a costly night at Suncorp Stadium against the Canberra Raiders, where they produced one of the bravest wins in the club’s history to record their seventh straight victory.

Brisbane managed to overcome an injury toll that saw them have their bench completely cleared by full-time to come back from 18-16 down to record a 24-18 victory. For the Raiders, it was the mother of all missed opportunities and they simply couldn’t get over the line despite Brisbane’s increasing fitness woes.

One by one they went down. Payne Haas began the procession when left the field after 28 minutes with an injury to the AC joint in his right shoulder. He did not return and although these injuries are usually manageable, there are potential NSW Origin implications for game two.

Then it was Adam Reynolds midway through the second half, who took a series of heavy shots before he was helped off in obvious discomfort with a rib concern. The former Rabbitoh did his best to continue but was eventually ushered from the field by Broncos medical staff.

The captain and halfback was making his return from a hamstring injury and had Brisbane looking sharp before more misfortune struck about the 60th minute. Nobody could fault his courage but the pain was obvious.

Almost immediately, centre Herbie Farnworth clutched at his biceps in pain and wasted no time in calling for assistance. Kevin Walters could have been forgiven for rummaging around for a pair of boots if the carnage continued.

Corey Jensen was left as the only useable interchange player on a night where Origin players Selwyn Cobbo, Kurt Capewell and Kotoni Staggs were already out of commission. When Ezra Mam went off with an HIA in the final minute, the Broncos were down to 13. 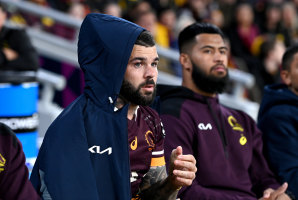 Yet somehow, their line managed to hold firm. Origin star Pat Carrigan was immense once more. Suddenly, he looks like one of the best middle forwards in the game and the former Broncos captain has taken his output to new levels.

He ran powerfully for 170m in a 68-minute shift to spearhead his pack without Haas. He had a torrid time as a young leader under Anthony Seibold but has now matured to be a huge factor for his club and state.

But what of the Raiders? They had Brisbane at their mercy and should they have got the try to level scores at 24-all, you could have easily seen them run away with the contest given the fatigue in the legs of the home side.

But they panicked, rushed plays, dropped the ball and generally ran around in circles instead of going straight down the middle. Ricky Stuart was on his feet in the coaching box and not in a good way. This really was a win that went begging but Brisbane owned the night as the club continues its rise from the depths of the ladder.