An extradition hearing for a Brisbane man, wanted in Samoa over an alleged conspiracy to murder that country's Prime Minister, has entered its second day.

Talalelei Pauga, 43, was taken into custody by Australian police on August 20 when Samoa made an extradition request to the federal Attorney-General's department. 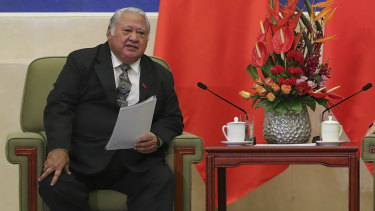 It has been alleged the Brisbane man was involved in a plot to kill Samoa Prime Minister Tuilaepa Lupesoliai Sailele Malielegaoi.Credit:AP

He has been remanded at Arthur Gorrie Correctional Centre for almost five weeks since then, with his lawyers calling for his immediate release on human rights grounds as he was not brought before a magistrate when first arrested.

A spokesperson for the Attorney-General's office confirmed Mr Pauga was wanted "to face prosecution in Samoa for the offence of conspiracy to murder".

In November 2018, Mr Pauga was charged by Queensland Police after he threw a pig's head Mr Malielegaoi at a Logan church, south of Brisbane.

Those charges were later dropped, but Mr Pauga was arrested on August 20 after Samoa made the extradition request over an alleged conspiracy to murder.

His lawyers Greg Finlayson and George Mancini launched a complicated effort on Monday to convince a Brisbane magistrate to release Mr Pauga, arguing his detention was unlawful as Mr Pauga had not been brought before a magistrate upon his arrest.

The extensive hearing on Monday focused on administrative matters including Mr Pauga's right to privacy, with an unsuccessful attempt made by his lawyers to close the court to the public and journalists.

Lawyer Marc McKechnie, representing the Commonwealth Attorney-General's office and appearing on behalf of Samoa, on Tuesday told the court Samoa had made a lawful request to extradite Mr Pauga and Australia had to honour its obligations under international law.

Mr McKechnie said the charges against Mr Pauga were serious.

Outside court, a business associate of Mr Pauga said Mr Pauga was an Australian citizen who had lived for many years in Brisbane. He has four children, and is well-known in Samoan communities as a political activist.

Nyom called Koeman a son of a bitch and sent him to### During the Getafe - Barcelona match
Messi, Beckham, Robben, Figo and best are among the contenders for the title of best right-winger in history (France Football)
The Valenciennes goalkeeper said the Sochaux player bit him. He replied that he wanted to hit the goalkeeper with his head for racism
Azpilicueta about Kep: Sometimes everything goes against you. To overcome this, you need character
In memory of the beheaded teacher, all matches of the French championship will begin with a minute of silence
Klopp on van Dijk: we will wait for him like A good wife waiting for her husband from prison
Maguire and Cavani did not fly with Manchester United for the match against PSG
Source https://www.theage.com.au/national/queensland/brisbane-man-faces-extradition-over-alleged-plot-to-kill-samoan-pm-20200922-p55xzv.html?ref=rss&utm_medium=rss&utm_source=rss_national

Early Voters Gather at Polls in Broward County Despite Rain

Voter Line Stretches On and On at Coral Springs Polling Place

Brawl Breaks Out in Stands as Eagles Host Ravens

Family violence workers burnt out in midst of 'shadow pandemic'

Daryl and the pork barrel are an insult to taxpayers

'You can't just bank your dollars': What Rugby Australia is weighing up in broadcast talks

Fragility, not strength, at the heart of Chinese politics

From the Archives, 1987: Blood on the bourse as the market turns feral

In a year of enormous challenges, the HSC has become smaller

Foreign investment shake-up could be fatal to startups

'Giving back the streets': The plan to de-pave 800km of Sydney roads

Dual living in the Bay

Orchestra promises Melbourne a season that will uplift – and heal

Victoria is right to be cautious in exiting stage four

The Australian lawyer who built a booming practice on finding loopholes

'Worried that he was going to get sick': Fauci not surprised by Trump's COVID diagnosis

A record first day of voting sees more than 15,000 ballots cast per hour

Man flown to hospital after incident at prison in Lara

Back to work: Business owners happy to reopen after lockdown layover

We do not deserve this harsh sort of treatment

Council looks to sell off properties two years after buying them

Deb Frecklington refuses to take a stand on euthanasia

Could Granny be a Nana?

CalWood Fire Burns Into the Night Near Jamestown, Colorado

Sydney versus Melbourne: what the experts say about the COVID numbers comparison

Crunch time is over: HSC exams begin after the 'most uncertain year'

Renewed push for ICAC to be independently funded amid Maguire scandal

'It was a bit shocking': NRLW 'underdogs' motivated by bubble sacrifices

'Very willing substitute': Sydney ready to step in to save India tour

Family ties: Why Penrith's father-son duo isn't the only 2003 echo for John Lang

Patients 'out in the cold' as new rules exclude myotherapy massage

Free agency a disaster of the AFL's making

NSW-Victoria border could open within a month

NSW-Victoria border could reopen within a month

Free movement across borders would be a just reward for Australians

WA claims it was ambushed by 'failed' NZ travel bubble

'Black people are literally voting like their lives depend on it'

Why home wellness is spawning a plethora of business ideas

Life's a beach under travel extension to 25km

How some homebuyers can snag $70k in grants

‘ISOLATED FOR YEARS’: One state could be cut off from rest of Australia

Cameron tells Giants he wants to move back to Victoria

Cameron to leave Giants, linked with move to Geelong

Ardern's catch of the day: moral support from a good bloke