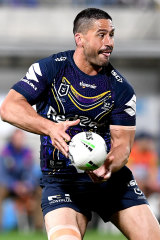 Melbourne Storm know what they have in skipper Cameron Smith but the next few games will show them what they will miss when he's gone.

On the surface, the Storm look well placed to cover their hooker who takes his 400-plus games of experience to the sidelines for a few weeks with a shoulder injury.

Another Smith – energetic 24-year-old utility forward Brandon – looks ready to show what he can do in hooker duties while forwards Jesse Bromwich and Dale Finucane will assume co-captaincy for Saturday's clash with the Canterbury Bulldogs at Sunshine Coast Stadium.

Bromwich, who has previously filled in as skipper, admits Smith makes captaincy look a lot easier than it is, especially around team talks.

"I might have to tap Dale up that one [the team talk]," Bromwich joked on Thursday.

"He's [Smith] done it so many times that you take it for granted how good he is until it's your turn to do it.

"I'm really looking forward to leading the boys out, it will be a good experience again."

Leadership won't be the only challenge on Saturday with the Storm also missing star fullback Ryan Papenhuyzen (rested). Young flyer Nicho Hynes, 24, will get the chance to make an impression.

Bromwich already respects the strong forward pack of the Bulldogs and his side knows their five-game winning streak is under threat.

"It's a tricky spot to be in," Bromwich said.

"We try to look past where they are on the ladder. They always stay in the fight. They have a great forwards pack so it's a big ask for your forwards.

"We take the positives from what is happening. Build our energy around Nicho being in and Brandon getting the start. All the young boys are really keen to play so that's a good thing heading into the game."

Bromwich also praised for young star Tino Fa'asuamaleaui who is putting together his best NRL season ahead of a high-profile move to Gold Coast Titans next season.

"Tino is really impressive and I could see it coming from a long time ago," Bromwich said.

"The way he applies himself around training. He's always putting effort in and asking the right questions, and a lot of them. He's getting reward for it now.

"It's unfortunate he is leaving next year but I want him playing as good as he can for us the rest of the year.

He joked: "Next year he can drop off."

The Storm play the Bulldogs at Sunshine Coast Stadium on Saturday at 3pm.

It's time to learn the names of new Borussia heroes. Now there are 17-year-old boys making goals
Paulo Fonseca: it's Important to bring Smalling back to Roma. We have only 3 Central defenders
Arteta about 2:1 with West ham: Arsenal made life difficult for themselves with losses, but they fought and believed in victory
Palace midfielder Townsend: Could have beaten Manchester United with a bigger difference. We had moments
Philippe Coutinho: I am motivated and I want to work hard to make everything work out well on the pitch
Torres on Chelsea: I Thought I could remain a top player, but I was unstable. Although there were enough successes
Neville on the broken penalty against Manchester United: an Absolute disgrace
Source https://www.smh.com.au/sport/nrl/bromwich-not-ready-for-life-after-smith-20200806-p55j1l.html?ref=rss&utm_medium=rss&utm_source=rss_feed