North Melbourne forward Ben Brown says he is committed to the club for this season but did not guarantee he will be back next year.

Brown had scans on his injured knee on Thursday, having been hurt after he was tackled by Geelong's Mark Blicavs in the opening term of a 33-point loss on Wednesday night at the Gabba. 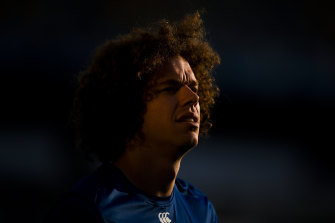 Ben Brown is focussed on rehabbing his injury.Credit:Getty Images

He said he had feared the worst when he left the field but had greater confidence he had escaped serious injury after reviewing the vision.

"When I first did it, I, obviously, thought about the worst. But it looked like on first examination last night it wasn't too bad," he said.

"It was just unlucky. I had a bit of a look at the vision afterwards ... just the way I was tackled and having that twisting motion wasn't great for the knee. I don't think it would be great for anyone's knee."

Brown had just returned to the side, having been dropped a week earlier. The star forward had managed only eight goals in eight matches before he was axed.

However, he remains one of the premier forwards in the league, finishing second in the Coleman Medal for the past two years.

He and his wife have also been dealing with the loss of one of their unborn twins.

Brown comes out of contract this season and his future is a major talking point, particularly if the Kangaroos are keen to secure another first-round draft pick.

As reported by The Age, the Kangaroos are keen to rebuild their list through the national draft over the next two years, having failed to vault into premiership contention after signing established players from rival clubs.

Before the fallout of the coronavirus hit the finances of all clubs, Brown's manager Adam Ramanauskas had been seeking a four-year contract for his client, reportedly for between $700,000 and $800,000 a season. The Kangaroos had offered a three-year deal. As reported by The Age, they are open to offers for Brown but only if the deal is suitable.

Brown, 27, was asked about his contract on Thursday but did not declare he wanted to remain at the club in the long term.

"To be honest, I leave that stuff to my management and the footy club. As far as I am concerned, I have got an injury I have to rehab. I'm hoping it's not too bad and over the next couple of weeks I can get back out there and play," he said.

"At the start of the year, if you had've asked me: 'How do you want this year to go?' I probably wouldn't have picked what has happened so far. But I think there are a lot of people in that boat.

"We are working through a lot of things as a footy club and personally as well. But I am really confident the way I go about my footy and I'll work hard and I am committed to this footy club and I want to help us have the success I think we can in the second half of the year."

Meanwhile, Richmond have confirmed defender David Astbury had an arthroscopy on his injured knee on Wednesday.

"Dave's knee was still giving him a bit of trouble, and this minor procedure will have him back running again in around a week," football department chief Tim Livingstone said.

It's time to learn the names of new Borussia heroes. Now there are 17-year-old boys making goals
Paulo Fonseca: it's Important to bring Smalling back to Roma. We have only 3 Central defenders
Arteta about 2:1 with West ham: Arsenal made life difficult for themselves with losses, but they fought and believed in victory
Palace midfielder Townsend: Could have beaten Manchester United with a bigger difference. We had moments
Philippe Coutinho: I am motivated and I want to work hard to make everything work out well on the pitch
Torres on Chelsea: I Thought I could remain a top player, but I was unstable. Although there were enough successes
Neville on the broken penalty against Manchester United: an Absolute disgrace
Source https://www.theage.com.au/sport/afl/brown-committed-to-kangaroos-this-season-but-future-unclear-20200806-p55j4t.html?ref=rss&utm_medium=rss&utm_source=rss_feed