The unexpected deaths of four newborns at Blacktown Hospital in the past 18 months have triggered an urgent review of the hospital's childbirth procedures by the Western Sydney Local Health District.

At least two of the deaths are subject to internal investigations. Analyses have considered whether missed opportunities to detect fetal distress and delays in performing caesarean sections contributed, clinicians with knowledge of the cases said.

Senior sources familiar with the four cases said they were concerned the maternity unit was under intense pressure to cater to growing numbers of patients.

Following questions from the Herald, the health district said it would hold an urgent review into the hospital's childbirth practices, sources who spoke on condition of anonymity said.

A senior obstetrician at Westmead Hospital is conducting a "root-cause analysis" into the most recent death, in June.

A hospital spokesperson said: "Blacktown Hospital has delivered almost 6000 babies in the last 18 months. In that time we have recorded four unexpected neonatal deaths.

"The death of a child is a tragedy and our thoughts are with the families impacted by the loss."

The spokesperson confirmed an investigation was under way into the most recent unexpected newborn death and said the baby's family was being offered bereavement support.

Following an inquiry from the Herald, NSW Health Minister Brad Hazzard directed NSW Health to provide him with full details of the situation.

"Any unexpected death of a baby before or shortly after birth is a terrible outcome for the family and requires a root-cause analysis as part of the critical health response," a spokeswoman for Mr Hazzard said.

"The minister has also requested urgent details of what arrangements have been put in place to support families in this situation and if no support has been offered it should be provided immediately," the spokeswoman said.

Vijay Roach, president of the Royal Australian and New Zealand College of Obstetricians and Gynaecologists, said unexpected newborn deaths were tragic and uncommon in NSW hospitals.

"The community has a right to accountability from health professionals and the medical system. When adverse events occur, there must be open disclosure, forensic investigation and a willingness to change processes to improve patient care.

"It is essential that any adverse outcome is fully investigated and that, during the process, patients, their families and the hospital staff are fully supported." 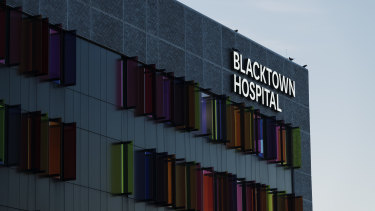 A root-cause analysis will probe the circumstances surrounding the most recent unexpected newborn death at Blacktown Hospital in June. Credit:James Brickwood

The hospital's maternity unit has been under immense pressure to care for rising numbers of patients as the local population booms.

Between January and March this year, 1014 babies were born at Blacktown Hospital, a 15.2 per cent rise (134 additional births) on the same quarter last year. In that time, the rate of births across all NSW public hospitals fell 1.3 per cent.

When Westmead Hospital's major obstetrics department was at risk of being overwhelmed by its own rapidly growing patient load, Blacktown Hospital began to admit pregnant women from areas previously covered by Westmead.

Blacktown opened its new birthing unit last August as part of a $700 million expansion of the western Sydney hospital to meet the needs of the growing community.

But despite a larger workload, staffing levels have not changed, leaving an increasingly junior staff overstretched and consultants spending the majority of their time at private hospitals, several healthcare staff told the Herald.

The rate of unexpected perinatal deaths is roughly one in 1000 births, putting Blacktown Hospital's four cases among 6000 births below the threshold.

"All information is privileged, and the reviews are confidential to ensure the privacy of the patients involved in this extremely distressing event," a NSW Health spokesperson said in a statement.

The data should be interpreted with caution, a NSW Health spokesperson said. For instance, it does not take into account differences in the risk factors of mothers.

The majority of perinatal deaths are due to a range of tragic, unavoidable circumstances, including severe congenital abnormalities and extremely pre-term births. The number of potentially avoidable neonatal deaths in NSW hospitals is not publicly documented.

It is expected that the perinatal mortality rates for NSW hospitals last year will be published later this year.

The most recent NSW Maternity Care Survey – including reported rates of complications – was conducted in 2017, before Blacktown Hospital's redevelopment and the sharp influx of patients.

It showed 41 per cent of respondents who gave birth at Blacktown Hospital reported experiencing a complication, compared with 36 per cent in the western Sydney health district overall and 35 per cent across all NSW hospitals.

The city has finally raised a star of its own. Pep calls foden the main talent of his life and is looking for an optimal position for Him
Emre belezoglu finished his career at the age of 39
Barcelona has spent almost a billion euros on transfers over 5 years. That's who the money went to
Andreas Pereira is ready to leave Manchester United. The midfielder is Interested in Benfica, Spanish and Italian clubs
Barca presidential candidate Font about 2:8 from Bavaria: Humiliation. No need to prolong the agony, Bartomeu-resign
Frankie de Jong: Barca have a lot of problems, the match with Bayern showed that. A lot of things need to change
Philippe Coutinho: it was unusual to Play against Barca, but I have a contract with Bayern
Source https://www.smh.com.au/national/nsw/bundle-of-grief-urgent-review-into-baby-deaths-at-blacktown-hospital-20200709-p55amu.html?ref=rss&utm_medium=rss&utm_source=rss_national

COVID lessons from the survivors of other horrors

Aren't we supposed to all be in this together?

Burgoyne's chance to go out in Silky style

Mum kicked out of daughter’s wedding