Burgess playing for Victorians in lockdown, not to prove a point to Sydney FC

Sydney FC could be forgiven for looking at Max Burgess as the one that got away but the Western United attacking midfielder isn't looking to prove a point to his former employers. Instead, his only motivation for Saturday's match is to provide some joy to his club's supporters under a strict lockdown in Melbourne.

Burgess has been one of the revelations of this season for Western United, scoring six times in his last games while providing three assists. It puts the 25-year-old in a rich vein of form heading into Saturday's match against the Sky Blues, who could be wondering why they never gave him a full-time contract. 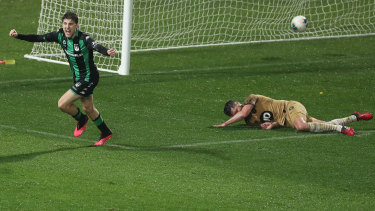 Max Burgess has been a revelation for Western United.Credit:Getty Iamges

The boy from Bondi made one appearance for Sydney FC after progressing through the club's youth ranks to even be coached by the club's current boss, Steve Corica, in the National Youth League.

However, he wasn't retained as part of their A-League squad in 2016 and had to work his way back into the A-League via the NSW National Premier League. Despite that setback, Burgess isn't seeking to show Sydney FC what they missed out on.

Instead, the COVID-19 pandemic in Melbourne is all that's at the forefront of his mind. While Western United are in a hub in Sydney's east, their family, friends and supporters are stuck in lockdown as the city comes to grips with a surge in cases of the deadly virus.

"We are really motivated to be playing for the people left back in Melbourne. It’s a tough time at the moment and sport is a privilege to be a part of," Burgess said. "We left a lot of loved ones, supporters back in Melbourne who are going through a difficult time so we are super proud to represent them. That’s been a huge driving factor for us - we are in a position to represent a group of people in a difficult situation."

Western United all-but sealed their passage to the finals after Wednesday's win over Perth Glory but aren't content with just a top six finish. The A-League newcomers want to make a statement of their title aspirations with a result against Sydney FC.

"Sydney FC has been the benchmark side for many years, to play them is a really good indicator for where we sit. It’s really positive for the group to secure that finals spot. It was one of the goals we set moving into the hub period," Burgess said.

"We came into the hub with a positive mindset. The more games for us builds continuity. We are trying to build momentum coming into the finals. It’s all about perspective for us. We are in a privileged position here to be playing football."

Burgess has struck a lethal partnership with United's Besart Berisha and playmaker Alessandro Diamanti in recent games, as the trio have combined for six goals in the club's last two games alone. The chemistry between the trio wasn't forged in the hub, says Burgess, but is simply a by-product of the determination of his two experienced strike partners.

"I think genuinely their personality," Burgess aid. "These guys are hungry professionals, they have achieved great things in the game so it’s a credit to them. They are leading the way with their passion and enthusiasm and that’s been the benchmark for us in the way we want to approach this opportunity."

Philippe Coutinho: I am motivated and I want to work hard to make everything work out well on the pitch
Torres on Chelsea: I Thought I could remain a top player, but I was unstable. Although there were enough successes
Neville on the broken penalty against Manchester United: an Absolute disgrace
Vidal moves from Barcelona to Inter for 1 million euros
Liverpool are still Interested in renting Dembele from Barcelona
Lacazette scored his 50th goal for Arsenal. 36 of them - at the Emirates
Zaa put United down with a double. Before the match, they recalled a rumor that the player could not in Manchester because of an affair with Moyes'daughter 😚
Source https://www.smh.com.au/sport/soccer/burgess-playing-for-victorians-in-lockdown-not-to-prove-a-point-to-sydney-fc-20200814-p55lw6.html?ref=rss&utm_medium=rss&utm_source=rss_feed