Buster, the perfect human made of plastic, is the future of anatomy

In a brand-new high-security laboratory, Professor Paul McMenamin is staring at the future of anatomy right in its cold plastic eyes.

It’s a perfect human, made of plastic. A 3D-printed replicant, with anatomical details like bones and veins and nerves accurate to 30 microns. That’s the width of a human hair.

“This one’s called Buster,” says a delighted Professor McMenamin in his thick Scottish drawl, patting him on the shoulder. “Because he’s a bust.”

“Huh,” says his offsider, Associate Professor Michelle Lazarus. “I never got that till now...” 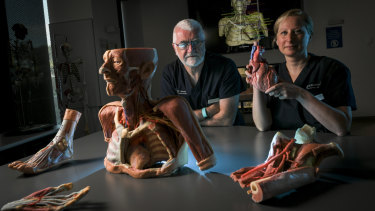 Together, the pair – and Buster – hope to reinvent the study of the anatomy of the human body. “We want to show it’s not dead, it’s alive and breathing,” says Professor McMenamin. “Pardon the pun.”

To do this, they want to partially replace dead bodies with perfect plastic replicas.

The shining equipment wrapped in white, rows of gurneys, and suite of freezers out the back are the realisation of Professor McMenamin’s dream: an anatomy lab of the future. 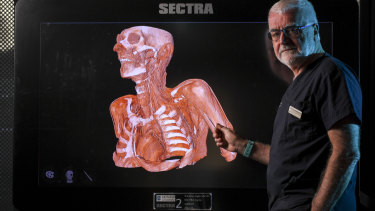 There are VR simulators and screens that can slice a virtual human body in two with the swipe of a finger. But the secret real secret here is a machine, pioneered by Professor McMenamin, that can print out plastic human bodies. No one else in the world can do this.

First, a high-accuracy CT scan of a donor body is obtained. Then, about half-a-million dollars’ worth of cutting-edge 3D printers build a copy out of soft plastic.

They are so accurate, calling them models does not do them justice. Professor McMenamin prefers “replica”.

And they are working on the next step: plastic-clone surgery. All it would take is tweaking the materials to make them feel more lifelike – so “the bones feel like bones, the nerves feel like nerves, the tendons feel like tendons,” says Professor McMenamin. “And then we’re going to cover it with an artificial skin.”

But other anatomists are not impressed.

“If you were going in for a prostatectomy, or to have your gall bladder removed, and the surgeon said: 'its OK, I was highly trained on a 3D printed model'. Would you be comfortable?” asks Professor Mark Forwood, chair of anatomy at Griffith University.

But Professor McMenamin says his students learn just as well from a replica as from the real thing. He’s even published studies that prove that, he says.

And anatomy, he believes, needs to evolve – or it will die out.

Med students already do a lot less anatomy than before. And the public association with grave robbing does not help – leading to schools around the world dropping ‘anatomy’ from their names. 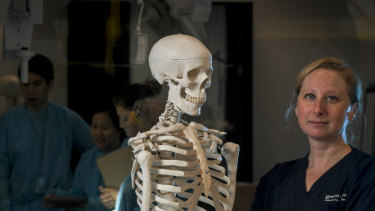 “It’s tied to anatomists’ identity. Who am I if I’m not dissecting?,” says Professor Michelle Lazarus. “But we need to evolve. If we don’t evolve, we will die out.”Credit:Eddie Jim

“It’s tied to anatomists’ identity. Who am I if I’m not dissecting?,” says Professor Lazarus. “But we need to evolve. If we don’t evolve, we will die out.”

Even with perfect plastic clones, bodies will still be necessary. That’s because working with a real body confers a different and unique lesson, one no amount of perfect plastic bodies can teach.

“The students talk about putting a knife into the sanctity of a person – is it OK?,” says Lazarus.

“It’s almost an intangible thing,” adds Professor McMenamin. “The things it evokes in them. The thoughts about empathy. Most of them have not even had a pet die.

“We need to teach them about what life and death is.”