The COVID-19 crisis has been a blessing for tourism in regional NSW, leading to a dramatic increase in short-term rental bookings, but popular destinations such as Byron Bay may struggle to cope with the influx of visitors.

Just 11 of 564 properties - or 2 per cent - in Byron Bay listed on short term rental site Stayz remain available for the first week of the school holidays, which begins September 28. 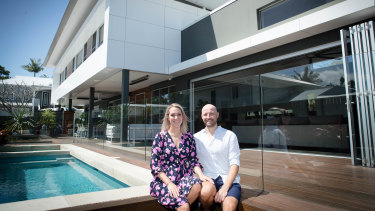 Louise Lally, with husband Ben, said her Byron Bay property was at 90 per cent occupancy this month - compared to 54 per cent for the same time last year.Credit:Danielle Smith

David Jones, the president of industry association Destination Byron, said tourists were flocking to regional towns thanks to the border closures imposed by state premiers such as Queensland's Annastacia Palaszczuk.

"The border closures to Victoria and Queensland are proving a boon for regional NSW destinations," he said.

Coffs Harbour and the Southern Highlands are also popular destinations, with just 4 per cent of properties still available, followed by Yamba (5 per cent), Jervis Bay (7 per cent) and Port Macquarie (13 per cent).

School holiday bookings at NRMA parks and resorts are also up an average of 30 per cent compared to 2019, with Dubbo, Port Macquarie and Murramarang on the NSW south coast experiencing the biggest increases in visitors. 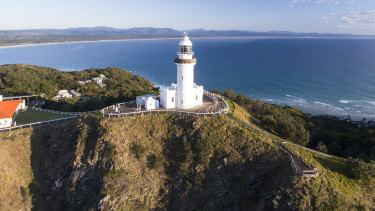 Regional NSW is bracing for an influx of visitors during the school holidays and into summer, as the COVID-19 crisis closes borders and curbs travel options.Credit:Destination NSW

"The upcoming school holidays is looking like business back to usual for regional towns that have been missing the much-needed tourism dollar for so many months," a Stayz spokeswoman said.

The average daily rate in September for properties listed on Stayz ranged from $269 at Coffs Harbour and $274 at Port Macquarie to $339 at Yamba, $508 in the Southern Highlands, $527 on the Central Coast and $542 at Byron Bay.

"The people who are staying in NSW are spending more travelling within NSW than foreign and interstate travellers would have spent in NSW," he said.

"We assume the exception to this is in Sydney as normally the major hotels rely on business travellers, conferences and events to fill their hotels."

Mr Jones said it was difficult to move around Byron without transport as there were only eight taxis and most Uber drivers were from the Gold Coast.

"Most restaurants have a two-week wait period already, pre-school holidays," he said. "They have less seats, and may be operating on adjusted hour and offerings."

Demand for luxury accommodation and short term holiday rentals in Byron Bay was about 50 per cent higher than 12 months ago, Mr Jones said. "Mid-scale and backpackers are not experiencing the same level of uptick, if at all, year-over-year."

"We anticipate a sizeable amount of cancellations should the Queensland border be opened," he said. "However, we also expect these cancellations to be replaced by converting waitlists and additional enquiries."

Mr Jones attributed the influx of visitors to the rise in remote workers. "Byron Bay is currently full of them," he said. "It seems anyone that was able to work remotely has opted to do so from our town."

Louise Lally said her property, which is listed on Stayz for $950-$1650 a night, was at 90 per cent occupancy this month, with only three nights vacant, compared to 54 per cent for the same time last year.

"Previously we have hosted guests from as far away as the UK, USA and Japan," she said. "However this year it has been almost all NSW residents."

The influx of tourists to regional NSW is expected to continue during the summer school holidays.

Airbnb bookings in Sydney from September to January have fallen at least two-thirds compared to last year, with only 14 per cent of properties on the short-term rental platform booked for New Year's Eve, according to AirDNA, which reports on Airbnb data.

In comparison, 73 per cent of Airbnb properties in the Shoalhaven area, 66 per cent in Byron Bay and 65 per cent in Coffs Harbour and have already been leased for the week beginning December 28.

Byron Bay has the most expensive Airbnb properties, with an average daily rate of US$519 over New Year’s Eve compared to US$310 in Sydney, US$311 in Coffs Harbour, US$332 in the Shoalhaven and US$395 on the Central Coast.

Mr Jeffress said property owners initially lowered prices when there was some reluctance from people to travel due to fear of further outbreaks.

"However now that demand is very strong and there has been no need to discount and it appears operators are getting on top of their finances and bills again," he said.

Arteta about 0:1 with Leicester: I Don't know why the hell our goal was canceled. It is difficult to create space when 10 people are sitting behind the ball line
Rodgers on 1-0 with Arsenal: Leicester deserved to win. Vardy is a world-class player
Juve without Ronaldo could not beat Verona and Crotone in Serie A
Vardy has scored 11 goals in 12 games against Arsenal in the Premier League. Only Rooney has more
15,000 Teddy bears were planted at the Heerenveen match as part of a campaign to fight cancer. Toys sold for 230 thousand euros
Adidas and Pharrell Williams have reinvented the old forms of Real Madrid, Arsenal, Manchester United, Bayern Munich and Juve. The design is hand-made and celebrates imperfection
Barcelona filed a complaint about the refereeing of the match with Real Madrid to the Spanish football Federation
Source https://www.theage.com.au/national/byron-bay-is-full-of-them-border-closures-a-boon-for-regional-tourism-20200917-p55wpb.html?ref=rss&utm_medium=rss&utm_source=rss_national