Researchers who developed a way to test wastewater for coronavirus are now calling for the technology to be used to screen incoming planes and passenger ships.

The testing method developed by scientists at CSIRO and the University of Queensland has been previously shown to be effective at detecting the virus at a population level by doing tests at wastewater treatment plants. 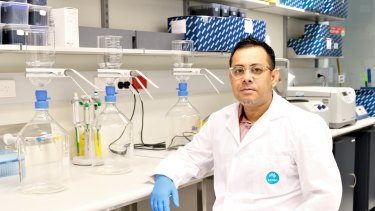 Dr Warish Ahmed, lead author on the research into using wastewater on planes and ships to test for coronavirus.Credit:CSIRO

They have now applied the principle to planes and ships and found that it had equally accurate results.

Lead author and CSIRO researcher Warish Ahmed said they partnered with transport companies to do testing on incoming flights and ships.

“The testing would act as a back-up warning system that someone on a flight or a ship had the virus. This is especially useful if we want to start to allow tourists back into Australia,” Dr Ahmed said.

“[With this method] you could potentially screen hundreds of people at one time - it will give you extra peace of mind, basically.”

The test looks for genetic fragments of the virus which are shed in human waste, then amplifies it, using a similar method to the one used for the individual nasal swab tests.

Co-author on the paper, UQ Professor Kevin Thomas, said the test produces results in 24 to 48 hours.

“When a plane lands, for example, we simply take a sample of the effluence coming out of the tank. On a ship you’d go to the sewage treatment pod they have on the ship,” Professor Thomas said.

“Then you take it back to the lab and process it. So it would fit under the current quarantine framework and would provide another tool to detect the virus.”

Dr Warish said the tests had already been shown to be able to detect very small amounts of the virus in waste sources, which meant the method was highly accurate.

“We did a test on wastewater in Brisbane on February 24, when the number of positive cases was, I think, only two, and we got a positive result,” he said.

While the wastewater testing can produce false negatives, they are about as common as in nasal swabs, which the researchers argue shows the two testing methods should be used together to cancel out the false negatives from either method alone.

The federal government has not made any official announcement about whether the testing will be used at points of entry into the country, but federal Science Minister Karen Andrews said the work was “outstanding”.

“The ability to test wastewater from planes and cruise ships is another piece of the puzzle as we look to the future of travel and keeping Australians safe,” she said in a statement.

Arsenal have offered Willian a 3-year contract
Aurier agreed to move to Milan. Tottenham want 20 million euros for a defender
Can-Casillas: One of the greatest is leaving the stage. You have always been an example, my friend!
Atletico President: Simeone is great. He constantly brings victories and titles
Bayern goalkeeper Fruchtl can go on loan to Nuremberg
Liverpool can buy Norwich defender Lewis for 10 million pounds as a competitor for Robertson
The Europa League returns today. We remember where everything stopped
Source https://www.smh.com.au/national/queensland/call-for-wastewater-virus-test-to-screen-incoming-flights-ships-20200716-p55crc.html?ref=rss&utm_medium=rss&utm_source=rss_feed