Ecuadorian rider Richard Carapaz claimed the leader's red jersey after a thrilling summit finish on the notorious Formigal mountain in stage six of the Vuelta a Espana on Sunday as Primoz Roglic slid down from first to fourth overall.

Spaniard Ion Izagirre of Astana won the stage by 25 seconds with a brilliant solo performance, but the real drama took place further back, with Carapaz (Ineos Grenadiers) finishing strongest of the overall favourites to cross the finish line 55 seconds behind in 12th. 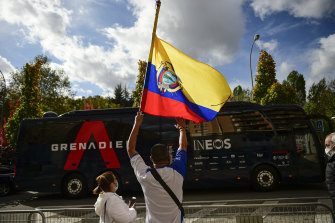 Slovenian Roglic (Jumbo–Visma), who suffered a mechanical problem inside the final 30 kilometres as the pouring rain intensified, came in one minute 38 seconds behind in 20th to surrender his lead to 2019 Giro champion Carapaz.

Roglic, who surrendered the leader's yellow jersey on the final day of the Tour de France in September, is 30 seconds back in fourth.

The stage was supposed to finish at the Tourmalet summit in the French section of the Pyrenees mountain range, but new coronavirus restrictions in France forced organisers to totally redesign the stage with only two days' notice.

The stage instead ended at the category-one Formigal after passing through the Picos de Infierno, which translates as the Peaks of Hell, featuring more than 26 kilometres of uphill terrain to the finish.

It was on the Formigal that Nairo Quintana laid waste to Chris Froome in the 2016 Vuelta and increased his lead over the Briton by nearly three minutes on his way to winning the title.

Monday is the first rest day of the Vuelta, which has been trimmed down from 21 stages to 18 due to the coronavirus pandemic disrupting the cycling calendar.

Ex-President of Barca Laporta will take part in the new elections
Antonio Cabrini: Maradona would still be alive if he played for Juventus. The love of Naples was strong but unhealthy
Ferguson on Rashford's charity: Fiction for a young man. He should give me some advice
A Preston player who twice touched an opponent's genitals was disqualified for 3 matches for aggressive behavior
Atalanta Director: everything is fine with Miranchuk, there are no symptoms of coronavirus
Kovid mocks the Latvian championship: the team got only 8 people (but still did not finish the match)
Gerard Pique: We all hope that Messi will stay at Barca
Source https://www.theage.com.au/sport/cycling/carapaz-takes-the-vuelta-lead-as-roglic-slips-to-fourth-20201026-p568hk.html?ref=rss&utm_medium=rss&utm_source=rss_feed

STAY AWAY: Island closed to new visitors as fire rages