Is there a hoarier genre in horror than the haunted house movie? The first were made soon after the invention of film in the 1890s. The styles have evolved and changed, but the basic idea is still with us, and for a reason: no one can withstand a really good one.

An old house offers all we need for the creation of fear: nooks and crannies, darkness and light, secret places and the possibility of terrible history. Castles are ideal but old hat and not commonly available; barns are too architecturally simple for purpose.

Sometimes we get a haunted forest or natural place, but mostly, we need man-made structures. Ghosts apparently prefer rooms, rather than caves, lakes and trees, at least in the west. Asian horror is much more invested in the natural world and often fresher because of it.

Relic is the debut of Japanese-Australian writer director Natalie Erika James and it’s an east-west hybrid.

James has ingested a lot of Japanese horror, as well as all the tropes of the haunted house film. She tries to invert those with ingenuity and care, applying a real-world theme — the loss of a parent through dementia. It’s genuinely creepy, if a little unfocused in the way it uses those ideas.

In Robyn Nevin, Emily Mortimer and Bella Heathcote, it has a strong cast, although we learn very little about their characters. That’s not unusual in horror, but risky: we may not engage deeply with them if we know bugger-all about who they are.

In the first scene, Edna (Nevin) stands semi-naked and dripping in her large country house, the bath overflowing upstairs. She looks like she has seen a ghost. Her daughter, Kay (Mortimer), drives from Melbourne with her own daughter, Sam (Heathcote). Edna is gone when they reach the house. 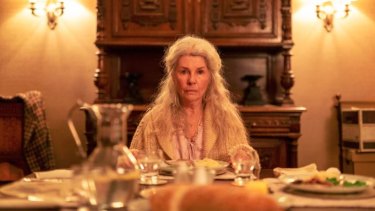 Robyn Nevin plays a woman losing her memory in Relic.Credit:Stan

The territory is familiar. Edna lives in a large, old, gabled wooden house with high-pitched roof (because there must be attic space in which to make terror). The house is on acres, so no one can hear you scream.

The rooms are cluttered with the detritus of more than 60 years of occupation, to suggest a deep history — and some of it was not pleasant, judging from Kay’s face. Sam has happier memories but she didn’t grow up here.

Kay’s nightmares return soon after they bed down. The director starts playing immediately with Kay’s state of consciousness, so we’re never quite sure if she’s dreaming all the knocks and wheezes she hears in the house.

That’s vintage technique, verging on cliche, but it’s driven in this case by James’ desire to keep her visual effects minimal and low-fi, largely built in-camera rather than computer. That’s the new way among the young and hip in horror.

James makes good use of the house but the movie is really about the deterioration of Edna’s memory. That’s personal for James, whose grandmother suffered from Alzheimer’s. The growing separation between Edna and Kay is the real story here. It’s a fresh idea, to suggest that it’s the person who’s haunted, not the house, but what to do with it?

James tells a story of three generations of women, going through a painful separation from each other’s orbit, but she can’t go too far into this or she will lose the power of the house. She opts for a bet each way — there is something very odd about Edna, but the house itself is an active part of the unfolding horror in a way that’s never quite explained.

Something bad happened in a cabin that once stood on the edge of the property. We wait, in vain, for that to be unpacked. The loose ends weaken the story.

Good horror is always thoughtful, always about something more than we see at first. Relic lives up to that standard, but it becomes muddier in meaning as it becomes scarier in execution. James delivers an uncomfortably gripping finale, with a real sense of trauma and decay. We have to deconstruct its meaning without much in the way of clues, and that damages the trust between storyteller and viewer.

Relic is streaming on Stan.

Vertonghen goes to Benfica. The contract is for 3 years
Arsenal will sign Willian in the next two days
Juventus highly rates Raul Jimenez. He's like Pirlo and Partici
Juventus are seriously Interested in Atletico midfielder Thomas
Champions League format for Atletico: Simeone's team is still an underdog, but now they have the best chance
Atletico claims the goalkeeper of the national team of Serbia and Eibar Dmitrovic, compensation – 20 million euros
The FA Cup will be held without replays in the 2020/21 season, and there will be one match in the 1/2 final of the League Cup
Source https://www.smh.com.au/culture/movies/characters-lost-in-darkness-between-horror-and-dementia-20200708-p55a56.html?ref=rss&utm_medium=rss&utm_source=rss_culture