Xi Jinping's bid for world climate leadership might be more palatable if China were not building a new coal plant every two weeks or adding more gigawatts of coal power each year than the rest of the world combined.

In February, China's National Energy Administration relaxed its "traffic light system" on permitting for new coal plants, opening the way for a construction blitz in the early 2020s. The small province of Jiangxi has a green light to double its coal power capacity over the next five years, adding 22 gigawatts (GW) or "another Turkey". Ecologists call it the "green leap backwards".

At the same time China is pitching for supremacy in renewable technology and electric vehicles. This has more to do with the strategic ambitions of "Made in China 2025" than mitigating climate change. 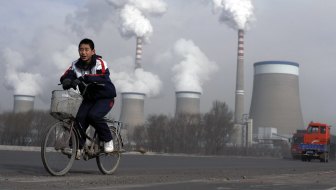 China already burns half the world's coal, and it keeps building.Credit:AP

An EV run off coal power is dirtier than a Volkswagen diesel. A lithium battery manufactured at 1000 degrees centigrade in Xinyu's giant coal-fired facility in Jiangxi is a brown horror story. So are the steel towers built for wind turbines. Coal produces 66 per cent of China's power, and 57 per cent of total energy.

China is the lead player in both the "Clean Tech Cold War" and the parallel contest of "Dirty Nationalism", to borrow the expressions of Manfred Hafner and Simone Tagliapietra in their metastudy of the global energy landscape.

You only have to look at the Belt and Road Initiative to see that the Chinese Communist Party is ideologically neutral on energy sources. The BRI is systematically pursuing nodal control over the digital infrastructure of artificial intelligence across a swathe of countries - much as Britain sought to control undersea cables and telegraphy in the late 19th century - but it is also funding a quarter of 400 GW of new coal plants currently under development in the rest of the world (Institute for Energy Economics and Financial Analysis data).

An EV run off coal power is dirtier than a Volkswagen diesel. A lithium battery manufactured at 1000 degrees centigrade in Xinyu's giant coal-fired facility in Jiangxi is a brown horror story.

It is pushing and enabling coal plants in areas where it is already as cheap to build utility solar and wind, chiefly in order to export its own coal technology and prop up its own power sector through joint ventures.

Bangladesh has had enough and is reviewing 90 per cent of its planned coal plants, concluding that the economics make no sense. Egypt has had enough too. It has shelved the vast 6.6 GW Dongfang-Shanghai plant at Hamrawein, the world's second biggest.

Yet China keeps building. It already burns half the world's coal, and emits more CO2 than the US, the EU and Japan combined.

The brief hiatus in coal expansion after the Paris Agreement - when the Communist Party seemed to get a grip on regional bosses - gave way to a fresh construction blitz as soon as the economy faltered last year. Beijing reverted to cement-mixing and infrastructure overkill.

Global Energy Monitor says China currently has 250 GW of coal-fired capacity under development, greater than the entire coal fleet of the US (246), or India (229), or the EU (150). The Chinese power industry proposed 41 GW of new plants in the first six months of this year.

President Xi had the chutzpah to present his net zero plan at the United Nations, which has decreed that no coal new plant should be built ever again anywhere in the world.

The US State Department retorted acidly that China is "the world's largest emitter of greenhouse gases; the largest source of marine debris; the worst perpetrator of illegal fishing; and the world's largest consumer of trafficked wildlife and timber products." But Mr Xi is somehow winning the higher media plaudits.

China's targets of peak emissions by 2030 and net zero by 2060 scarcely meet the challenge. The Intergovernmental Panel on Climate Change warned us in October that we have just a decade left to avert runaway climate change. 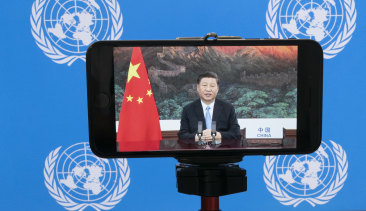 Yet the twist in this saga is that China's coal capacity use had collapsed to 49 per cent even before COVID-19 hit. Plants cannot compete with onshore wind from the North China Plain, or utility solar anywhere.

Three Chinese economists concluded in a paper for Nature Energy that solar is already cheaper than coal power in every city and in every sub-climate of the country. "We reveal that all of these cities can achieve, without subsidies, solar PV electricity prices lower than grid-supplied prices," they said.

Coal expansion continues because there is no proper pricing signal. But there is another reason. The escalating showdown with the US has made Beijing acutely aware of China's vulnerable supply lines and reliance on energy imports. Chinese officials know what happened to Japan under the Roosevelt blockade in 1941. Seaborne supplies of liquefied natural gas cannot be fully trusted.

Michal Meidan from the Oxford Institute of Energy Studies says Beijing views US naval supremacy and US control over the world's dollarised payments system as an "existential threat".

The strangling effect of American sanctions against China's shipping company COSCO last year confirmed their fears. "The takeaway in China has been that it must indigenise," she said.

That means retaining an emergency capability in coal, the country's one abundant fossil fuel. Keshik Capital in Singapore says China has been building strategic railways and freight capacity to link the inland coal fields of Shanxi and Mongolia to the industrial hubs on the coasts. The optimistic view is that we are seeing the last hurrah of Chinese coal.

The plummeting costs of renewables will render this hedging strategy superfluous soon enough.

Bloomberg New Energy Finance says the levelled costs of solar will drop to $US25 ($34.75) per megawatt/hour by 2030 in China and make it pointless to keep running even the best ultra-supercritical coal plants.

This spectacular cost compression - an 89 per cent fall in solar modules since 2010 - is largely the result of China's frenetic push for energy security combined with mass scale and the Chinese method of subsidy and dumping that we otherwise so deplore (with theft of German solar technology along the way).

This is about to be repeated with energy storage of all stripes, and with the rush to dominate the coming hydrogen economy. It may be bad trade practice, and will be resisted by Europe and America as both move towards a carbon border tax. But it is also doing the world a favour. Without it, we would not now have a global cost structure poised to render the entire structure of fossil energy fundamentally obsolete.

Personally, I have no doubt that China will achieve peak emissions long before 2030 and net zero long before 2060, not because Xi Jinping says so, but rather because that is the relentless logic of the technology shift and the cost curve.

So is China a climate villain or a climate champion? It is both.

Kane and Son gave each other 29 assists in the Premier League. Only Lampard and Drogba (36) did it more often
Veron about Messi: Playing in Barca gives him discomfort
Mitryushkin on the move to Fortuna: Germany is a country of goalkeepers. I can learn a lot here
Scott Micromini: There is no point in beating PSG if you don't play the same way with Leipzig
Alejandro Gomez: Have Ricica was the coronavirus, and he fell into a depression. Now everything is fine with him
Lyon wants to rent Griezmann and is ready to give Barca Depay for free in the event of a deal (Okdiario)
In the attack against Bayern, Nikolic can use the Hoffenheim technique-luring into the pressure and a long pass to the Alaba zone
Source https://www.smh.com.au/business/markets/china-s-great-green-leap-backwards-raises-environmental-red-flag-20201002-p5618q.html?ref=rss&utm_medium=rss&utm_source=rss_feed

Two period terraces sell in one line for $2.1m

Privatisation crusade has long been core business for tribal Libs

No crowds at the Cup, but bookies banking on big online bets

'They know the drill': women happier working from home than men

Turkey calls on Muslims to boycott France over Islamic crackdown

Funnel cloud spotted as storms bear down on SEQ

Derby favourite Young Werther on target despite lack of experience

Legendary ref: Smith should have been binned

Brisbane councillor swore at council officer while trying to park