The Croatian, whose most recent final-four appearance at a major was at the 2018 Australian Open when he reached the final, encountered stiff resistance from Rublev but his 33 aces made the difference.

Already impressive in a straight-sets win over world No.2 Daniil Medvedev in the quarter-finals, Cilic again relied on his serve and huge forehand to make up for 71 unforced errors.

The 2014 US Open champion next faces either teenage sensation Holger Rune of Denmark or Norwegian eighth seed Casper Ruud.

“The fifth set was an incredible battle. Andrey played incredibly well. One had to go down and today was my day,” said 20th seed Cilic, who will play his first semi-final at Roland Garros.

“It was hard emotionally because he played some games very well. When you play this long there’s always some ups and downs so I had to keep my focus.” 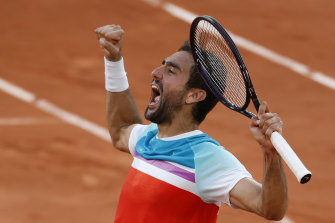 Rublev played with accuracy in the first set, which he won with a break of serve in the 11th game having not faced a single break point.

Cilic picked himself up in the second set to break for 2-0 and held throughout, although he needed four set points to level the match with an ace.

Rublev was thrown off balance and struggled to read the Croatian’s serve. He played too short, giving Cilic the opportunity to whip brutal forehands past the Russian, breaking for 4-3 in the third set.

But Rublev found some new energy in the fourth, playing more aggressively and with more power to break for 5-3 and hold to send the match into a decider. 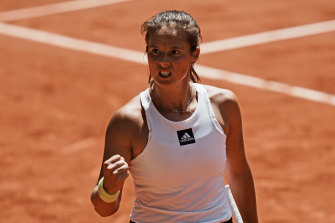 Russia’s Daria Kasatkina is through to the French Open semi-finals.Credit:AP

Rublev saved a match point at 5-4 before yet another ace by Cilic allowed the Croatian to save a break point at 5-5 in a tense finale.

It went down to the super tiebreak, in which Cilic added powerful returns to his huge first serve to prevail on the second match point when Rublev buried a backhand into the net.

Rublev has now failed to win any of his five quarter-finals at a major while Cilic has now reached the semi-finals in all four grand slam tournaments.

Earlier, Daria Kasatkina advanced to her first major semi-final with a 6-4, 7-6 (7-5) win over Russian Veronika Kudermetova.

In a quarter-final match-up of 25-year-old Russians, Kasatkina built a 6-1 lead in the tie-breaker and finally clinched it on her fifth match point, beating Kudermetova with a backhand drop shot.

The 29th-seeded Kudermetova took a medical timeout to have her left foot taped after she held for a 6-5 lead in the second set. She then lost nine of the next 10 points before her brief comeback in the tie-breaker.

Kasatkina has not dropped a set in her Roland Garros run. She hit only 16 winners, but Kudermetova made 50 unforced errors – twice as many as her opponent, who now faces top seed Iga Swiatek for a place in the final.