City towers change hands in show of confidence for offices

Two city office towers have changed hand to Singapore-based owners as investor confidence in Melbourne rises despite the upheavals of the past two years and slow return of office workers.

CapitaLand Investment has swooped on a 22-storey tower at 120 Spencer Street opposite Southern Cross Station in a $321.25 million deal. 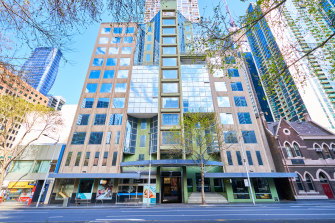 225 King Street is the second building in the Melbourne CBD vacated by Victoria University in six months.Credit:

And a vacant 12-storey office tower in King Street has changed hands for close to $40 million a week after its owner Victoria University opened its new $385 million city campus.

“We believe that the Australian office market is showing signs of growth that will overcome the near-term challenges of vacancy and tenant incentive levels,” Toussaint said.

We are still very confident in the medium to long term prospects of the Melbourne market, and we are looking to continue to acquire more assets.

The Spencer Street tower is 97.5 per cent occupied and counts coworking group WeWork among key tenants.

It’s not the only recent purchase by the fund manager. It has been shovelling money into Australia, investing about $1.5 billion in five assets through its private and listed funds in the past six months.

The empty office at 225 King Street sold to another Singapore-based company, SLB Development, which is controlled by Matthew Ong, a member of the wealthy Ong family that controls the Lian Beng conglomerate in the island state.

Victoria University decommissioned the King Street office, which it purchased in 1995 for $4.8 million, after moving staff and students into the new 29 level vertical campus at 370 Lonsdale Street developed by industry super fund manager ISPT.

Mr Rutman said the empty office’s sale in the current post-pandemic environment was the “purest test” of the market.

“There’s no hiding behind leases or incentives. It gives a clear sense of what people are thinking,” Rutman said.

The tower will need significant rejuvenation and the price, reflecting both the property’s tired interior and turbulent market conditions, came close to the $40 million expected.

Lian Beng made a splash when it purchased and sold three office buildings in Melbourne over the same number of years.

In a hyperactive spate of deal making between 2015 and 2018, it swooped on 247 Collins, 50 Franklin Street and 596 St Kilda Road, turning over each asset for a hefty profit within a relatively short time frame.

“We’ve always wanted to re-enter the market after we exited the three assets we previously held. We find the timing is right now with the office recovery well on the way across the globe,” Ong said.

“We are still very confident in the medium to long-term prospects of the Melbourne market, and we are looking to continue to acquire more assets to build our exposure to Australian office buildings.”

Occupancy across Melbourne’s CBD was 48 per cent in May, according to the Property Council of Australia.