Two landmark energy events in the two most populous states this week sent some signals that the end of Australia's decade-long torment over climate policy is in sight.

NSW's parliament debated for 30 hours before pushing through its Electricity Infrastructure Investment Bill despite 249 amendments from One Nation MP Mark Latham. This set the state on what Energy Minister Matt Kean hopes will be the path to becoming a "clean energy superpower". 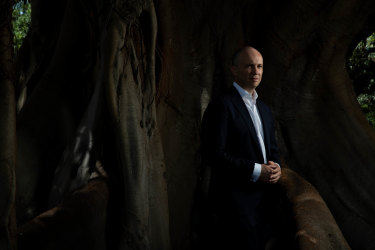 Days earlier, D'Ambrosio dubbed the $200 million deal with the Morrison government to underwrite a major new transmission - similar to NSW's - as a "renewables superhighway".

It was the first instalment of what Victoria trusts will be a bilateral bonanza on the scale of the $3 billion deal agreed earlier this year between the Berejiklian and Morrison governments.

"It's been a real watershed week," Kane Thornton, the chief executive of the Clean Energy Council, says. "NSW has legislated an extremely progressive and aggressive agenda and there's been a big budget [for renewables'] in Victoria."

"It really sets us up for the energy transition."

Getting to these points in the two states was not an easy task. 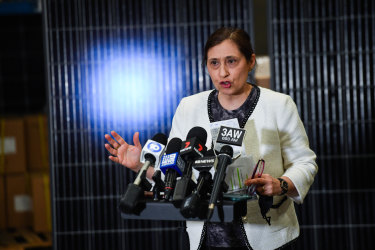 Victorian Minister for Energy, Environment & Climate Lily D'Ambrosio has, with less fanfare than her northern counterpart Matt Kean, has also been steering her state down a low-carbon economic path.Credit:Joe Armao

Of the two, Kean's journey is indicative of the many obstacles to pushing the energy bill through.

He had to contend with opponents from within his own party and even pushback from his federal Coalition counterpart Angus Taylor. Then there was the big energy corporations.

"Those powerful vested interests – the big energy money, the coal barons, that have decided energy policy in this country for generations – finally, we wrested back control of the agenda from them and put it back in the hands of the community," Kean tells the Herald and The Age from his parliament office in Sydney. 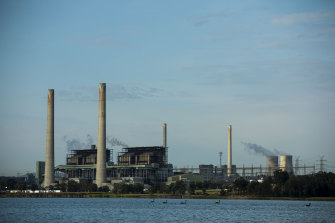 "What's different this time is we had a relentless focus on delivering cheap energy," he says. "It was all about the economics and I think that's a different approach [from what's] been taken in the past."

Kean's new energy road map takes in many policy destinations, such as auctions to bring in energy storage to support renewables, support for five renewable energy zones which he hopes will bring in $32 billion in new clean energy investments. There are also advocates to ensure consumers and local manufacturers are treated fairly. 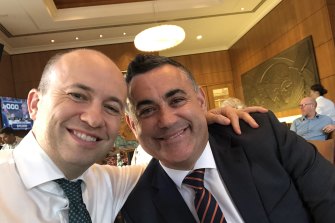 Matt Kean, the NSW Energy and Environment Minister (left) with NSW Nationals leader John Barilaro at the Perth COAG event in November 2019. Kean credits support from Barilaro as critical to getting his energy policy through.

Kean had to win over the Premier Gladys Berejiklian and her right-wing Treasurer Dominic Perrottet, Nationals leader John Barilaro, and lately Labor and the Greens to ensure that even a change of government would likely leave the policy framework intact.

"This is durable and lasting reform," Kean says. "This means energy policy in NSW is settled – this is so important for the private sector."

Such multi-party support has largely eluded policymakers at a state and federal level. Kean himself describes taking on the energy and environment portfolios in March 2019 not long before Malcolm Turnbull became the third prime minister to be rolled, in part, because of climate policy. He says he then found a "smouldering wreck" of an energy policy after Scott Morrison abandoned the National Energy Guarantee.

D'Ambrosio has been a long-serving energy minister in Victoria and has watched the prospects of a coherent national climate and energy policy wax and wane.

Likewise in Queensland, the policy divide between Labor and the opposition remains wide. Had Annastacia Palaszczuk's Labor Party lost last month's election, an incoming Liberal National government would have likely dismembered most of Labor's plans for renewable energy and hydrogen hubs. 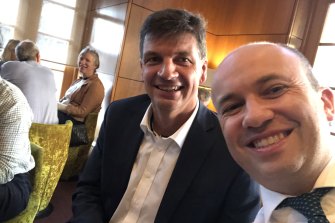 The final passage of the NSW energy bill on Friday closed a chapter, but the victory was still "touch and go", with final turbulence coming from federal minister Taylor.

The Australian Financial Review reported on Monday that Taylor was demanding NSW hand over its energy modelling, warning that the policy could have "unintended consequences" of closing coal-fired power stations faster than scheduled. This was just as Latham was gearing up to ''stall'' the bill's passage with the hope of killing it.

A big summer blackout would be all that was needed to stoke fears about the grid's stability even though Kean's policy won't begin to make full traction until later this decade.

Behind the scenes, though, Kean had already telephoned Taylor after learning of the ''backgrounding'' his staff were doing on the NSW policy to journalists.

"I've got a constructive relationship with Angus," Kean says. "When he gives me his word, I trust him ... I agreed to allow my officials to brief him [on the modelling] and we left it at that.''

The Morrison government is still concerned about early closures of coal-fired power plants triggering price spikes for consumers, as was the case when Victoria's Hazelwood plant shut in 2017 after barely six months' notice.

NSW and Victoria's policies have the effect of reducing the "national" and "market" functions of the National Electricity Market (NEM) as they expedite planning for their special renewable energy zones. In the process, they are also reducing the federal role in the power sector.

Taylor says his government would "continue to develop and implement policy that protects consumers, maintains downward pressure on electricity prices and develops the backbone of a reliable, lower emissions NEM for the next decade and beyond".

"The NEM will always have a future, it is a physically connected grid to efficiently deliver electricity to consumers across NSW, Victoria, Queensland, South Australia, Tasmania and the ACT," he says, adding the federal government "will always have a role in the shaping [its] direction".

For their part, the big generators and retailers, such as AGL and EnergyAustralia, have

concerns too. AGL, the largest generator and carbon emitter in the country, has said its 250 megawatt gas plant planned for Newcastle has been delayed because of the NSW bill.

"We only got the broad strokes a couple of weeks ago so we are rushing to do some modelling to put in place what we think it might mean," Brett Redman, chief executive of AGL, says. "[The details] could make an enormous impact on what it is that you will invest, when you will invest and how you will invest".

Similarly Liz Westcott, head of energy at EnergyAustralia, says there was some alignment.

"Industry, market bodies and governments actually all have a common goal: a common goal to get to an energy system that's going to be reliable, affordable and carbon-neutral," she says.

"But we are not fully aligned on the pace and maybe the sequence of things, and in particular now the role we each play – what's the role of the private sector ... of government and market bodies?"

For Tennant Reed, Ai Group's principal national advisor, the state road maps and ''superhighways'' may be under construction but the final destination is a long way off.

He says some studies indicate global electricity generation demand may need to more than double to decarbonise the economy. Reeds says the growth in Australian generation could be larger still if we are competitive in hydrogen exports.

With Nick Toscano and Miki Perkins

Barcelona did not pay the players for six months in December, although they took out a loan. The club promises payments in February
Messi is in Barca's bid for the Cup game with Rayo Vallecano. Dest will not play due to muscle problems
Gerrard on Lampard's resignation: Chelsea have a history in this matter, so no surprises
Golovin about the nickname Tsar: Nothing more than a joke. This is necessary for the media and fans, but I am a football player
David De Gea: I try to be a leader for Manchester United. I have the experience of winning big titles here
It feels like we've been working together for 10 years! Chelsea stars say goodbye to Lampard
Bayern Munich have signed former Basel striker Oberlen
Source https://www.theage.com.au/environment/climate-change/clean-and-green-powering-through-watershed-week-for-energy-policy-20201127-p56ikc.html?ref=rss&utm_medium=rss&utm_source=rss_feed

Learning from a tragic past to build a better future

Leaders eye federal election while vision falls by the wayside