When the world's first motel opened in California in 1925, five or so years after the end of the Spanish Flu pandemic, little could its designers and builders know that they had laid the foundations of the perfect model for a pathogen-free holiday nearly a century later.

Suddenly, in the era of the coronavirus, this form of back-to-basics accommodation with its abundance of anonymity (typified by the ingenious breakfast hatch, through which meals magically appear) offers renewed appeal. 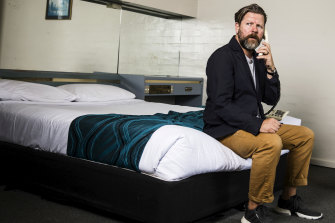 Indeed, for Tim Ross, comedian, design aficionado and author of Motel: Images of Australia on Holidays, there's the realisation that with domestic travel restrictions set to ease, with NSW leading the way on June 1, motels offer a return to simplicity and affordability in uncertain times.

"The idea that you can drive straight up to your room with the key already in the door (since you'd already booked and paid for it online) with no lift buttons to touch and no buffet breakfast means that the motel should make a comeback from a safety point of view alone," he says. 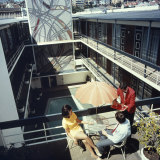 Trent Fraser, the chief executive of the US-based Choice Hotels, which in 2002 took over the Australian Flag Inns brand, agrees that motel and motor-inn style accommodation is well placed to benefit from the anticipated increase in Australians taking self-drive holidays as they likely eschew air travel.

"Travellers on these types of trips are looking for an affordable, clean, comfortable and convenient stop along their route," Fraser says, "or just somewhere to base themselves while they explore the local region."

Crucially in 2020, motels and motor-inns - which first began to appear in Australia in the 1950s and now employ nearly 20,000 people across 2220 establishments - are ideally designed for social distancing, allowing guests to park their vehicles outside their room with direct room access with minimal "communal touch points".

"[There's the absence of] internal corridors and large reception areas that guests need to pass through to enter and exit the property," he says. "It simplifies social distancing for guests and hotel operators."

Let us not forget that it was motels which pioneered the assurance of paper wrappers around toilets emblazoned with the words, "hygienically sealed for your protection", and in response to the pandemic Choice Hotels has launched a new "Commitment to Clean" program, featuring the use of hospital-grade disinfectant.

Dean Long, the chief executive of the Accommodation Association of Australia, believes that the retro-factor inherent in many motels will offer some new-found appeal in the age of COVID-19 - and an alternative to the unregulated Airbnb properties - with clearly-defined standards of cleanliness set to form an integral part of all future holidays. 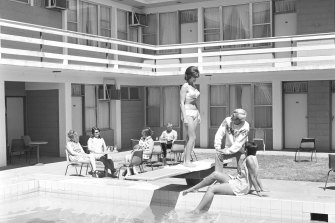 Alice Springs, 1970: “A man kicks back in a freshly ironed pair of slacks, while a woman in a bikini wonders why he’s wearing a jumper,” notes Tim Ross.Credit:Courtesy of the National Archives of Australia

"We have seen across generations, a yearning for experiences that are considered vintage with all of the modern amenities we demand in 2020 and many of our regional operators are perfectly positioned for this market," Long says.

But Trish Gordon, owner of the Albury Townhouse Motel on the NSW-Victoria border, which is averaging three guests a night with a room rate of $89 (down from $110), is not quite as sanguine.

"It's a trying time for motels," Gordon says.

"It'll be a long time before it comes back to normal. But we're all in the same boat here. We're lucky to have three guests a night though because at the start of the pandemic we were only getting one."

Although intrastate travel in NSW has been approved from June 1 Victorians across the bordering Murray River are still unable to holiday in their own state, let alone a neighbouring one with the future of domestic travel uncertain. 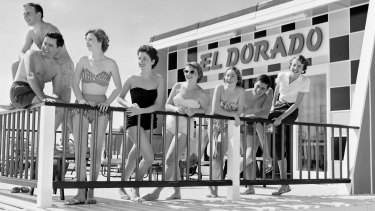 Fascinated by the culture of motels, Ross says they offered a taste of American-style glamour.Credit:Courtesy of the National Archives of Australia

Unlike the US, where motel nostalgia thrives in properties faithfully restored to their former kitsch-infused glory, relatively few Australian motor-inns have received such treatment. However, some properties have been converted into de facto luxury hotels.

These include Halcyon House in Cabarita Beach, the former surfside hotel; Bannisters in Mollymook, a repurposed 1970s motor inn, also in NSW; and Zagame's House, once the landmark Downtowner Motel in Melbourne's inner-city Carlton dating to the late 1960s.

"There's always been an opportunity for the motel industry to better embrace and understand the reasons why so many people like motels so much," Ross says.

"But if you're thinking of motels as just a cheap bed for the night it's a misunderstanding of the certain heritage aspect of them."

Fascinated by the culture around motels that offered middle-class Australians, such as his parents, a taste of American-style glamour, motor-inns still conjure fond, if somewhat perverse memories for Ross.

"I want to walk into a motel room and be reminded of my family holidays as a child," Ross says, who is working on a upcoming photographic exhibition on motels with the National Archives of Australia in Canberra.

"The brown brick walls of the room, the clock radio flashing the wrong time, the cars arriving outside at 2am with the beam from the headlights streaming through the frosted glass above the door."

Kate Berry, who shares Ross's love of motor-inn culture, runs the popular OK Motels on Instagram and is building a nostalgic online directory for devotees to "find a place to stay that features breeze blocks, wood panelling or even a vibrating bed". She is saddened that the breakfast hatch is now, more or less, a relic of the past.

"It is a shame that most motels now don't offer the breakfast hatch, as it became too much work," she says.

"And some cited security as a reason for nailing them shut too. But when you do roll up to a motel that does have that little slip of a breakfast menu, it's quite a moment."

Anthony Dennis is the travel editor of The Sun-Herald and The Sunday Age.

Former Orenburg coach Yemelyanov: I Don't believe that the club is on the verge of bankruptcy
Tonali wants to move to Inter. The club is in talks with Brescia
Nikita Kashaev: When Swedes learn about the statistics of coronavirus in Russia, their eyes pop out
Besiktas players got down on one knee, forming the initials of George Floyd
RB Leipzig considers Rasetsu as a replacement for Werner
Director of Bayer: the Future of Havertz has not yet been determined
Arsenal is ready to pay 25 million euros for 19-year-old Feyenoord midfielder Kekcu
Source https://www.theage.com.au/national/nsw/cleaning-up-road-trips-set-to-make-motels-the-inn-thing-20200522-p54vox.html?ref=rss&utm_medium=rss&utm_source=rss_feed

‘Do not go, do not attend: Health Minister urges Australians to avoid mass protests

One-off payments offered to workers struck down with COVID-19

‘He was cheating on his lunch break’

McGuire to broadcast AFL across the States

Tedesco cleared of coronavirus as Bulldogs sweat on Lamb result

The McCanns' story is a universal parable for every parent

'As fast as we can': CSL vows to manufacture UQ COVID-19 vaccine if successful

Behind the battle for Eden-Monaro is a wounded electorate

McCarthy back at Dockers training two days after collapse

Titans' skipper says coach's swing of the axe was justfied

Titans' skipper says coach's swing of the axe was justified

Castle with a view sells $725k over reserve

Police urge organisers to cancel rally, or face fines if it goes ahead

'We're still not there yet': Clarkson backs Wingard's fight