Wright, who coached the Magpies for two seasons and was an assistant for one, led the Magpies to just one win this year, over the Queensland Firebirds. The team made the finals in 2019 but was eliminated by the Vixens, finishing fourth. 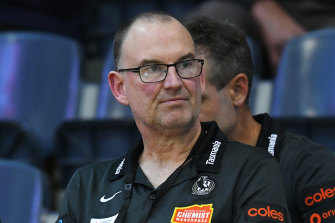 "Rob and his staff led Collingwood back to finals in 2019 and nurtured a very inexperienced group through a tough campaign in 2020," Anderson said.

"A raft of injuries and absences depleted the squad this year, which partly explains why the season returned only one win.

"It was a tough hand to be dealt and Rob and his off-court team did an admirable job in the circumstances. Some outstanding young players, such as Molly Jovic, who finished runner-up to Geva Mentor in the best-and-fairest award, emerged with Rob's guidance.

"Unfortunately, though, we were unable to meet our expectations. On behalf of Collingwood, I thank Rob for all that he gave to our program."

Wright said it had been "a privilege and a pleasure" to coach Collingwood.

"The realities of high performance sport can be brutal but we all accept them, players and coaches alike. [Super Netball] is the best domestic netball competition in the world and it is tough," he said.

"That said, I believe Collingwood is positioned to re-emerge in 2021. I hope it does. Thanks to Collingwood and everyone in the program."

The Messi Foundation won a lawsuit against the ABC newspaper. They wrote about the organization's tax fraud
Mbappe announced the death of 8-year-old Luca, who was battling cancer. The striker dedicated a goal to him on Saturday
Lippi finished his career as a coach. He won the 2006 world Cup with the Italian national team
Acts Kolisevski: Pirlo's perfect, because that gives us confidence. He is not afraid to produce young players
Laudrup on Hazard's injuries: it's sad to see months go by for such an outstanding player
The journalist apologized for statements to Fati: I wanted to extol the beauty of his movements
Khabib on meeting with Ronaldo: I was wondering how he keeps this fire going for 17 years. Motivation, discipline, as I understand it
Source https://www.smh.com.au/sport/netball/collingwood-part-ways-with-coach-after-disappointing-season-20200929-p560c2.html?ref=rss&utm_medium=rss&utm_source=rss_feed