Under-pressure Australian Daniel Ricciardo on Friday said he has spoken to McLaren team boss Zak Brown and felt he had the team’s full support amid speculation surrounding his Formula One future with the former champions.

The 32-year-old moved to McLaren from Renault last season, with his contract running until the end of 2023.

But his struggles to get to grips with the Woking-based team’s car have continued into a second season, raising questions about whether he will see out the length of his deal. 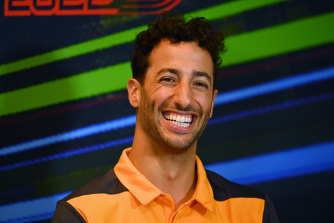 The speculation intensified after Brown confirmed the existence of exit clauses in Ricciardo’s contract two weeks ago at the Indy 500, on the same weekend as the Monaco Grand Prix, while announcing that McLaren’s IndyCar team had extended their agreement with F1 aspirant Pato O’Ward.

“The clarity is clear for us moving forward, my contract is clear with the team until the end of next year, I’m fully committed.

“I have the full support of the team, and we want to do it together,” he added.

Ricciardo, an eight-time grand prix winner who handed McLaren their first victory since the Brazilian Grand Prix in 2012 at Italy’s Monza last year, has scored points just twice this season, one of which was in Saturday’s ‘Sprint’ race in Imola.

Teammate Lando Norris, who beat Ricciardo last season and was given a new contract this season stretching to the end of 2025, has scored a podium and six points finishes, including the Imola ‘Sprint’, from seven races so far.

“I think stripping it back to the core, I still know what I can do, I still believe I have it,” he said.

“It’s not a place of like low self-confidence or low self-esteem ... I think in this sport that everything operates at such a high level and if something’s a little bit out of tune it can have a carry on effect.

“So it’s really just for me to get back in that place where I’m fully in tune with the car, and then it’ll come.” 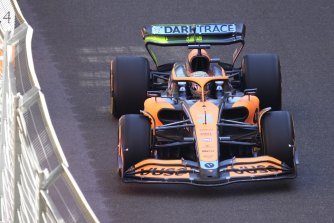 Meanwhile, Charles Leclerc pushed Red Bull rival Sergio Perez off the top of the timesheets to end Friday practice for the Azerbaijan Grand Prix with the fastest time for Ferrari.

The Monegasque, who had trailed Perez at the end of the first session, pulled out a one minute, 43.224-second lap in the second hour of running to end the day 0.248 seconds clear of the Mexican.

Championship leader Max Verstappen was third 0.356 seconds off the pace.

The Dutchman leads Leclerc by nine points in the overall standings after seven of this season’s 22 rounds.

Perez, winner in Monaco two weeks ago who is bidding to become the first repeat winner in Baku on Sunday, is third 15 points behind his Red Bull teammate.

Behind the top three, Fernando Alonso went fourth quickest for Alpine ahead of compatriot Carlos Sainz who was fifth for Ferrari. The double world champion showed promising pace in both sessions, having been fifth quickest in the opening hour.

Frenchman Pierre Gasly ended the day sixth for AlphaTauri ahead of George Russell in the Mercedes and teammate Yuki Tsunoda.

Esteban Ocon in the other Alpine and Norris rounded out the top 10 ahead of Aston Martin’s Sebastian Vettel and seven-time world champion Lewis Hamilton.

The Azerbaijan Grand Prix, run around an unforgiving layout known for catching drivers out, has a reputation for serving up the unpredictable.

But there were no major incidents that disrupted running on Friday.

Mick Schumacher and Nicholas Latifi caused two virtual safety car periods during the first session. Several drivers also kissed the barriers or ran wide into the run-off areas as they tested the limits of the track.

Cars were also seen to be ‘porpoising’ or bouncing dramatically as they sped down the start-finish straight.