Contempt of court proceedings have been launched against the developers who illegally demolished the Corkman Irish Pub in Carlton after they failed to comply with an order that they transform the ruined site into a park.

The City of Melbourne and the Victorian government filed proceedings against Raman Shaqiri and Stefce Kutlesovski, who failed to deliver on their promise to build a temporary park at the razed site under an agreement they reached with Planning Minister Richard Wynne last year. 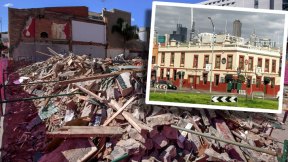 Carlton's Corkman Irish pub, built in 1857, was demolished without permission in 2016.

The government previously secured a court order at the Victorian Civil and Administrative Tribunal, seeking to force Mr Shaqiri and Mr Kutlesovski to deliver on their promise to convert the vacant site into an open space.

Having knocked down 80 per cent of the 159-year-old pub on a Saturday in October 2016, they were ordered to halt demolition that night by Melbourne City Council. They ignored the orders and levelled the pub the following day.

The site was last year valued at between $8 million and $10 million, and the state government has repeatedly resisted calls by the Victorian opposition to compulsorily acquire the land, arguing it would force the government to pay a now-enhanced price for the site.

Planning Minister Richard Wynne said the developers would be liable for all costs of the clean-up and construction of the park. "At every turn these developers have failed in their responsibility to rectify their unlawful behaviour," he said.

"They have been given every opportunity and have failed every timeline. The government and the City of Melbourne have no choice but to file contempt proceedings at VCAT, both against them as individuals and as a company."

"I have authorised the council under the Planning and Environment Act to begin clean up and construction of the Corkman site so it can be a park enjoyed by the community."

Lord Mayor Sally Capp said the owners had failed to comply with the VCAT order requiring them to clear the site and make it available for public recreation.

"They continue to do the wrong thing and we won’t tolerate it," she said. "We’re extremely disappointed the owners have failed to comply with the VCAT order and will take action on behalf of the community. We need to ensure the site is cleaned up and available for the public to enjoy."

Mr Shaqiri and Mr Kutlesovski were initially fined almost $2 million for destroying the building. Last year a County Court appeal led to the fines being cut to $1.1 million.

The VCAT proceedings were filed on Thursday against Mr Shaqiri and Mr Kutlesovski, and the company that owns the property, 160 Leicester Pty Ltd, of which both men are directors.

The City of Melbourne will now transform the site into a public open space and seek to recoup costs from Mr Shaqiri and Mr Kutlesovski.

Cr Capp said the destruction of the Corkman Pub in Carlton had left a scar.

"The owners of the Corkman site showed callous disregard for our city’s history by knocking down the heritage pub," she said.

Opposition planning spokesman Tim Smith said the government should have taken swifter and tougher action against the developers from the start.

"These guys have undertaken the heist of the century and I think the government at every stage has not been as tough as it should have been," he said.

"I think the people of Victoria would be entitled to think that these two crooks who illegally knocked down the pub shouldn't be allowed to benefit from it."

Matteus on Levandovsky: This is not just the best player in the world. His character and will are unique
Messi trained with a bandage on his left leg. This is a precautionary measure, he will play against Bayern
Karl-Heinz Rummenigge: Neuer is world-class, and Ter Stegen is on the way to it
Chelsea are stepping up negotiations for Havertz after Bayer's relegation from the Europa League, Cech is involved in them
Messi bought a penthouse in Milan. It was reported that Inter is Interested in the player
Real advance refund the Youngster of rental Sociedade. Zidane is impressed with his performance
Barys 20 days before the start of the KHL: they do not know where to play, Legionnaires are cut off from the team
Source https://www.theage.com.au/national/victoria/contempt-of-court-proceedings-launched-against-corkman-pub-owners-20200716-p55cpp.html?ref=rss&utm_medium=rss&utm_source=rss_feed