An emotional Winona Costin was going to take the City Tattersalls Cup trophy to her sick father after a surprise winning double at Randwick on Saturday.

Costin’s father, John Calvert, was diagnosed with cancer earlier this year, and she dedicated Knights Order’s all-the-way win in the City Tattersalls Cup to him. 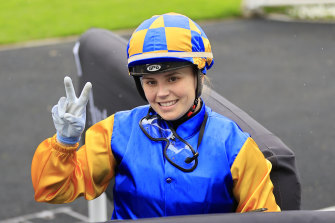 ‘‘He is the biggest supporter of mine and my inspiration. I just want to keep going well to keep his spirits up,’’ Costin said. ‘‘I started a good run just after he got sick, but I haven’t been riding that much in town, so today will give him a big boost. I’m going to take the cup to him, because he will love that.’’

Costin had earlier won the Highway Handicap on Proven Class, which she originally thought was going to be her only ride of the day.

‘‘I was going to come just for the Highway and then go to Kembla, but then Gai offered this one,’’ Costin said. ‘‘I rode him in the Port Macquarie Cup and thought he went really well, and with that run under his belt he was very strong.

‘‘He liked the conditions and could be a nice horse in the making.’’

Bopper could go to The Hunter

Kris Lees is thinking of giving smart three-year-old The Bopper a shot at The Hunter at only his fifth start after he dominated the Brian Crowley Stakes at Randwick. Lees has been at pains to attempt to take the hype off the gelding, but he continues to step up. His record is now three wins from four starts, and the defeat was a second in track record time.

‘‘We are looking to the $1 million Inglis Dash with him next year [which will run at Randwick on February 6] as a target. I just have to work out if he has one more run or goes for a break now,’’ Lees said. ‘‘We might have a look at The Hunter with him, but it will depend on how he comes through this run.’’

The plan had been to take a sit on The Bopper but, when he sprang from the gate, Josh Parr found the front and controlled the race. He was never really challenged as he scored by a length from Tommy’s Gold, with On The Lead another two lengths away.

‘‘He’s got tremendous gate speed, and Josh was able to control the race. He got some pretty soft sectionals in the early stages, and he was able to show the turn of foot that we know we’ve got,’’ Lees said.

The Bopper, which is named after legendary Newcastle detective John Mooney, left Parr impressed with his weapons, including a lightning turn of foot.

‘‘He is well and truly on the rise, he will turn into a really nice sprinter,’’ he said.

Peace gets chance to find best

There have been excuses for Positive Peace this preparation but she got everything right in The Nivison and returned to her winning form of the autumn.

She raced through the grades with a series of wins earlier this year capped by taking the group 2 Emancipation Stakes but has not been able to find that form in the spring. Josh Parr was left perplexed by Positive Peace’s last start, but the addition of a tongue tie saw her hold off late charges from Wandabaa and Arithi to add another group 3 to her resume.

‘‘I was so confident going into the Angst, but she over-raced and got her tongue over the bit. The tongue tie applied today, back to 1200m and a bit of rain around – it’s all worked out perfectly for her,’’ Parr said. ‘‘I was very keen to be positive on her, especially coming from the 1600m to the 1200m.

‘‘I needed her fitness to be her best asset. Racing on speed was vital. We got a nice clear run, nice clear air and she was brilliant.’’

Trainer Bjorn Baker said he would target the Hot Danish Stakes at Rosehill in two weeks with Positive Peace.

Atalanta Director: everything is fine with Miranchuk, there are no symptoms of coronavirus
Kovid mocks the Latvian championship: the team got only 8 people (but still did not finish the match)
Gerard Pique: We all hope that Messi will stay at Barca
Agent of coronavirus from the Beginning: I feel fine. A test is a test
Barcelona has reached an agreement in principle with the players to reduce salaries. The club will save 122 million euros
Barca presidential candidate farre: We need to get Neymar back. He also wants to move
Maradona's son said goodbye to his father: You will never die, because I will love you until my last breath
Source https://www.theage.com.au/sport/racing/costin-dedicates-city-tatts-cup-victory-to-her-sick-dad-20201024-p5688k.html?ref=rss&utm_medium=rss&utm_source=rss_feed

'Anything that starts will be difficult to control': Total fire ban for state's north

Property prices could keep falling as 'distressed' sales mount up

South Australia to reopen border to Victorians on December 1

'500 dinosaur bones out of 500': a father and son rate Sydney's newest exhibit

A haunting whodunnit – or is it?

Fiction reviews: The Good Sisters and three other titles

Is it a job? Is it well-paid? No, it's just the writing life

Guns, nudity and the odd horse: Chunky Move keeps us on our toes

Summary of fences: not just an open-and-shut gate

Your guide to the best Black Friday deals

The most important stories can be uncomfortable

‘He would be dead’: Grandad saved by passers-by

Relief on the way for Coast cops as border restrictions ease