Could this Aussie surf drama be the next teen hit for Netflix?

Summer Torres (Sky Katz) makes a striking early impression in the 10-part drama series, Surviving Summer. The New York teenager is poised atop a flaming skateboard on a diving board over a swimming pool when the police arrive. As screen entrances go, it’s memorable and it economically establishes the qualities of the girl whose name forms part of the pun in the title. She’s fearless, impulsive and rebellious.

A serial stirrer, Summer has a fractious relationship with her mother, Margot (Kate Beahan), a globe-trotting journalist. At a loss about what to do with her daughter, Margot calls in a favour from an old friend, Abbie Gibson (Adrienne Pickering), who lives on Victoria’s south coast with her husband, Thommo (Dustin Clare), their teenage son, Ari (Kai Lewins), and his younger sister, Honey (Asmara Feik).

The resentful Summer arrives in the fictional town of Shorehaven firm in her belief that she’s been consigned to a backwater and determined to escape. However, events conspire to keep her there, among them the discovery of the joy of surfing. “We wanted Summer to be an explosion in Shorehaven,” explains executive producer Joanna Werner (Dance Academy, The Newsreader), who created the series with Josh Mapleston.

So the scene is set for a richly layered, fish-out-of-water story focusing on surf culture and the trials of adolescence. The carefully crafted series also opens out to explore female friendships and issues of male mental health. As a bonus, it’s a showcase for the rugged beauty of Victoria’s Surf Coast. “After Dance Academy, I knew how fabulous it is to work on shows that are aspirational and inspirational, but also create drama that’s cinematic,” says Werner. “In Dance Academy, we had dance and with Surviving Summer, we have surfing.” 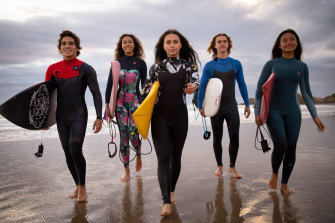 Like the internationally successful teen dance drama, Surviving Summer focuses on a group of attractive, athletic teenagers who are passionately dedicated to a competitive discipline that requires intense physical and mental commitment.

Shot in and around Anglesea for 10 weeks from February last year, the series’ production involved two units working concurrently, a main drama unit operating under director of photography Katie Milwright (Upright, Laid), and a surf unit headed by Rick Rifici (Breath, Dirt Music). “Rick was basically in the water non-stop for eight weeks wearing two wetsuits,” marvels Werner. “They always say don’t work with children or animals, but add to that tide and wave size. Things can change rapidly without notice.”

Meanwhile on dry land, Summer is making discoveries and her hostility to her exile is eroding. “She’s outgoing and extroverted,” says 17-year-old Katz of her character. “But at the same time, she keeps to herself, so it’s an interesting balance. She’s misunderstood and she’s knows that she’s misunderstood, and as a response to being hurt she doesn’t want to open up to anyone. But she finds, for the first time in her life, that she has friendships and she opens up. It’s difficult for her but it teaches her a lot about who she is and who she wants to be.” 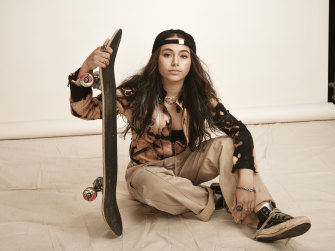 Sky Katz has appeared on America’s Got Talent, Disney’s Ravens Home and is a professional recording artist. Credit:Ben King

One of the eye-openers for Summer is seeing Ari at the heart of a loving and supportive family. “Summer’s grown up in a single-parent family and she and Margot struggle with their relationship,” says Werner. “When she’s sent to the other side of the world, she finds this family that she didn’t know she needed.

“The Gibsons are a beautiful family. They’re in the perfect fibro house – and finding one of those in Anglesea that hasn’t been knocked down was really tough. We were after that idyllic Australia. We wanted to find a pocket of old beach living.”

Live-action drama is often directed at girls ... Netflix saw this as a show that should attract boys and girls.

Ari becomes the key to Summer’s immersion in her new world. He’s tentatively returning to competitive surfing following an injury and gruelling months of rehabilitation. His friendship group includes keen surfers who are each facing different challenges. Marlon (Joao Marinho) has emigrated from Brazil with his mother (Tatiana Hotere) and instinctively understands Summer’s initial reaction to Shorehaven. Poppy (Queensland surf champion Lilliana Bowrey) runs a surf school with her brothers and is grieving the recent death of their mother. Bodhi (Savannah La Rain) is dealing with the fallout from her parents’ marriage break-up. As is the way of such things, Ari carries a torch for Bodhi, who’s now with Marlon, while Poppy’s quietly keen on Ari.

“We wanted to be authentic to the nationalities that we had scripted,” says Werner. “We wanted Summer to be an American and Sky is such a dynamo. She appeared on America’s Got Talent as a rapper when she was 11, then got a job on Disney’s series, Raven’s Home. She’s a professional music artist with millions of TikTok followers. She’s an empire.”

Regarding Ari, Werner says, “ideally, we were looking for an experienced actor who could surf, and Kai (Wild Boys, Roar) was the golden ticket”.

“I’ve never competed, I surf for the joy of it and my ability reflects that,” Lewins explains. But since I was 14, I’d surf with a group of mates as often as possible. I’d get to school basically falling asleep because I’d been up since 4am, catching a bus, then a train, then having a 20-minute walk, then I’d surf and then walk, bus and train to school.”

Mirroring the culture-clash element in the drama, Werner notes that the local approach to performance can differ from the American one: “Australian performance, particularly with kids, is much more grounded and real. We treat them the same way we would in premium adult drama. There’s no difference for me between Surviving Summer and The Newsreader: we’re not looking for the laughs or playing to the back row.” 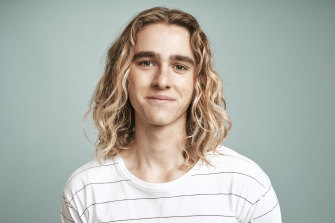 “Ideally, we were looking for an experienced actor who could surf, and Kai was the golden ticket,” says producer Joanne Werner of Kai Lewins, who plays Ari in Surviving Summer.Credit:Ben King

Katz discovered that “Disney is bigger acting. This show was more natural, but something that was really cool was that I could bring a bit of the comic timing that I learned on Disney. And my Disney character was a bit like Summer, sarcastic, a bit of a smart arse, and I brought some of that attitude to this.”

Lewins describes his co-star as a “pocket rocket”, like her character, while Ari is quieter and more introspective. Lewins calls him as “a beautiful soul”, explaining that “even when Ari’s being difficult, or pouty or moody or just frustrating, he wants the best for everyone around him, even when he feels he’s been majorly slighted”.

Originally, however, Ari was conceived as a girl, with early feedback from Netflix spurring the shift. “Live-action drama is often directed at girls and there’s a lot more that caters for girls,” says Werner. “Netflix saw this as a show that should attract boys and girls, so we made the decision to make Ari a boy and that gave us such rich story potential. Ari was always going to be emotionally fragile and it took on even more relevance.” 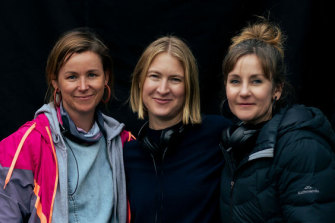 As Ari grapples with anxiety in the aftermath of his injury, Summer finds an unfamiliar comfort in her friendship with Poppy and Bodhi. “Quite often drama plays into animosity between female characters,” says Werner. “We wanted the friendship to be the heart and soul of the series, for Summer to find not only the Gibsons, but to find friends. It’s a grounded yet aspirational vision of female friendship.

“I like seeing positive things on TV. My kids are little, but they watch Bluey and what I love about it is that, rather than conflict, the siblings are lovely to each other. TV for a young audience does affect their world-view, so having some positivity reflected to them is important. We wanted this to be a warm show and we’re not ashamed of it being warm-hearted. We feel as though it’s somewhere that you’d like to be.”

Now it’s also somewhere they’re hoping to revisit. The production team’s fingers are crossed that Shorehaven will charm viewers as it does Summer and that there will be a second season, ideally with suitable surf.

Surviving Summer is on Netflix.