One way of looking at this whole COVID-19 experience is that it’s largely about radical interdependency. It’s everywhere, really. This week, as New South Wales authorities revealed that “patient zero” for the Crossroads Hotel cluster had in fact come from Victoria, Sydney-siders suddenly saw how much they were at the mercy of Melbourne – at least while Premier Gladys Berejiklian insisted on keeping the NSW-Victoria border open. 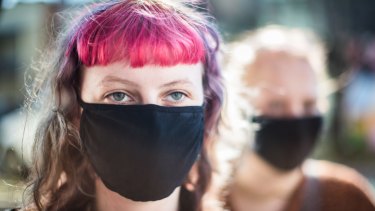 The AFL has discovered that its continuing financial viability depends on the indulgences of the premier of a rugby-league state, with Victorian clubs now set to spend the season camped in Queensland.

Older Australians are sweating on the behaviour of the young, who are reportedly more cavalier in their hygiene and distancing practices. On it goes.

Once you step back and take it in, it’s a hell of a genealogy of dependency. It quite possibly begins with security guards who were supposed to be responsible for Melbourne’s hotel quarantine, runs via lower socio-economic groups and casual workers without access to sick leave and possibly JobKeeper, then takes in Victorian holidaymakers and freight drivers.

Consider one aspect of this: that while it appears to hit lower socio-economic people first, the financial pain arguably ends up hitting the middle class hardest. At least that’s the picture we get from consulting firm Taylor Fry, which found that in both Melbourne and Sydney it’s inner-city professionals who’ve been most affected by pay cuts and reduced working hours.

Areas of high unemployment have been somewhat cushioned thanks to the increase in unemployment payments. The figures suggest you really didn’t want to be working in something like finance or law when the music stopped.

So, middle-class workers and business owners – watching their work at the firm dry up or their cafe forced to close again – are being directly affected by the way other people’s lives work in our economy. Perhaps if there was less casual work so that more people could take time off to get tested, it might have been different.

Perhaps if the relentless push from governments to outsource things to private firms had abated, we wouldn’t have seen the rorting of hotel quarantine for profit that apparently led to such sloppy practices. Perhaps if fewer people were forced to live at such close quarters with others, especially in places such as public housing towers, the middle class might have escaped some considerable pain.

There was a time, not so very long ago, that such things were easily ignored. We might care in principle (or not) about the growth of casual work or the inequalities in our society, but unless these described our personal circumstances, they remained abstract ideas. Now, they’re becoming concrete. Other people’s problems are manifestly our own.

This was always true, of course. Even just to take the issue of inequality, it’s a social ill that shows up in lower levels of education in society, less political engagement, and higher crime rates. That means we were always affected. 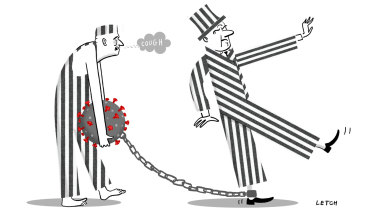 Now so many of us find ourselves financially decimated or unemployed through no fault of our own, thanks to a biological parasite that is showing us who is really in charge. Suddenly all these signs of our progress – these sophisticated, bustling cities full of globally mobile people – become the very things that make us most vulnerable. Our “mastery” has become our Achilles heel.

That’s interdependence of the most comprehensive sort. It’s precisely what we’re being shown in places that have been irrationally obstinate in their denial (like the United States or Brazil), or probably misguided (like Sweden).

And it’s the reminder Australia’s getting in this moment as state and federal governments stare at a nervy future and call out a complacency in their populations that has seen us relax social distancing because deep down we thought we’d beaten this virus. It now seems truer to say that, given our cases had hitherto been overwhelmingly from overseas arrivals rather than community transmission, we hadn’t even begun fighting it.

But that complacency is an inevitable expression of our belief in our mastery. For now we’re still trying to re-establish life as it was, with the same business models, the same lifestyles, and, for now at least, the same basic social and working arrangements.

That’s not judgment: I do it just as much as anyone else because it happens as though by reflex and it is difficult to imagine anything different.

We might give lip service to some idea of a “new normal” to be discovered some day, but we don’t yet believe it in our souls. We haven’t clocked just how profoundly our assumptions about the world are being shaken, how the fault lines we’ve ignored until now are being activated.

That’s what is so affronting about the thought of tightened restrictions and secondary lockdowns. We’re face to face with our own fragility and we don’t like what we see, if we even recognise it at all.

Waleed Aly is a regular columnist.

Waleed Aly is co-host of Ten's The Project and is a lecturer in politics at Monash University.

Thomas Tuchel: If both legs were intact, you could have seen my 40-meter sprint
PSG saved Tuchel's pet: Choupo-moting got everyone for free, managed not to score from a centimetre, and now pulled Paris to the semi-finals of the Champions League
Gian Piero Gasperini: The worst part is that we were so close. I can only thank the guys
Neymar was the player of the match Atalanta-PSG. He gave an assist
ПС PSG suffered through the entire quarter-final and turned it over in 149 seconds. Lifted the Italian curse and went so far in the Champions League for the first time in 25 years
ПС PSG's pain was transformed into happiness: in three minutes, the suffering stars turned into celebrating kings
The club from Italy won't win the Champions League for the 10th year in a row. This is an anti-record
Source https://www.smh.com.au/national/covid-s-now-showing-us-who-s-really-in-charge-20200716-p55ck7.html?ref=rss&utm_medium=rss&utm_source=rss_feed

How to catch trevally or queenfish: Scott Hillier