Jobs Department staff given the task of finding private security firms for hotel quarantine were wary on day one of the crisis of dealing with a "cowboy industry," saying they didn't want "rogue" guards "prowling the corridors" of hotels.

A flurry of WhatsApp messages between staff at the department on March 27 show that doubts about the quality of the people being hired to provide security were there at the very start of the program. 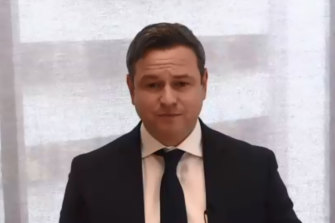 "Gotta be careful with a lot of security companies. Heaps of cash work," one of the messages said.

The doubts were proved prescient after poorly trained and equipped security guards, many on cash payments or working as sub-contractors, helped spread COVID-19 into the community causing Melbourne's second wave of infections.

The Department of Jobs, Precincts and Regions Secretary, Simon Phemister, who is before the inquiry this morning, said he believes the decision to use private security guards over police was made in a key meeting involving Victoria Police and Emergency Management Commissioner Andrew Crisp.

It is the first time a Victorian public service boss has given such a firm answer to that question. Mr Phemister said he believed the decision was made in state control centre meeting that started about 4pm on March 27, two days before the first international arrivals would be quarantined in Victoria.

It comes as Premier Daniel Andrews' much-anticipated appearance before the inquiry has been pushed back from Wednesday to Friday afternoon due to scheduling issues.

Counsel assisting the inquiry, Rachel Ellyard, said "these timetabling [changes] have been at the board's initiative and we are very grateful to the ministers for accommodating us."

In his daily press conference this morning, Mr Andrews stood by his August statement to Parliament's accounts and estimates committee that it was "fundamentally incorrect to assert there was hundreds of ADF staff on offer and somehow someone said no."

The evidence to the inquiry so far strongly suggests that from the first day the program was set up on March 27, there was help available from the Australian Defence Force for the quarantine effort.

The decision to use private security over police or Defence troops has been a contentious issue politically and before the inquiry. More than 30 security guards contracted COVID-19 while working in the hotels before the virus spread into the community and caused Victoria's second wave. 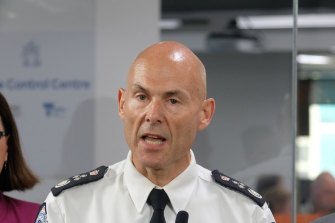 Mr Andrews said this morning the mistakes made in the program were unacceptable and the inquiry was set up to shed light on what happened.

While Victoria's top decision-makers, including department heads who ran hotel quarantine, the current and former police chiefs and Mr Crisp have told the inquiry they don't know who made the call to use private security, Mr Phemister was clearer in his evidence today.

Mr Phemister told the inquiry he received a briefing after the crucial 4pm state control centre meeting from Jobs Department executive Claire Febey, who was in the meeting, and she told him the department had been directed to procure private security.

He said immediately after that debriefing, his staff began looking for security companies. If the decision had been made earlier, he would have contracted security firms sooner, he said.

Victoria Police Assistant Commissioner Mick Grainger told Mr Crisp during the meeting that it was the force's preference that private security be the "first line of security." Victoria Police have argued that they were expressing a preference, not a direction.

Mr Phemister said he has listen to the recordings of the meeting and said the experts were in the room, they were senior people and decision-makers.

"I take that as a clear direction we should go off and do it," he said.

He said the decision was not made during a Victorian Secretaries Board meeting that was happening about the same time and involved Chief Commissioner Graham Ashton and Department of Premier and Cabinet boss Chris Eccles.

Mr Phemister said the role of the state control centre was to make those operational decisions.

The exchange of WhatsApp messages about the quality of guards came within a departmental group calling itself "Working with Vic A team" at just after 10pm on March 27, the night the key decisions were made.

Hans-Dieter flick: Bayern played great defense and didn't let Eintracht do much
Ajax with the score 13:0 beat Venlo. This is the biggest win in Eredivisie history
Messi doesn't score for Real Madrid after Ronaldo left for Juve. In the last Clasico before the transfer, they both scored
Sergio Ramos: Clean penalty, I was grabbed. It is unfair to judge the referee
Ronald Koeman: I don't understand VAR, it's working against us. Barcelona do not deserve such defeats
Griezmann did not make any effective actions in five matches under Koeman
Ex-referee Andujar Oliver believes that the referee should not have awarded a penalty against Barca in the Clasico
Source https://www.smh.com.au/politics/victoria/cowboy-industry-bureaucrats-knew-of-security-industry-s-bad-reputation-20200922-p55xyu.html?ref=rss&utm_medium=rss&utm_source=rss_feed