Parents were scrambling to arrange babysitting for their children on Wednesday night as the deadline loomed for tough new lockdown rules that leave many ineligible for childcare.

Under the government's strict new coronavirus rules, only the children of permitted workers and those who are vulnerable can access childcare for the next six weeks.

But by Wednesday evening, many parents were still uncertain if they were "permitted workers".

The government did not publish the permitted worker permits employers require until late on Wednesday afternoon and took until 5.30pm to clarify the rules on babysitting.

The childcare sector was also battling to understand the full impact of the new rules, just hours before being asked to play their part in imposing them, with some centres choosing to close their doors temporarily in the confusion.

The City of Yarra wrote to parents on Wednesday evening, telling them it would close its five childcare centres for the rest of the week "while we understand the impact of stage four restrictions on our services".

The new restrictions come into force at 11.59pm on Wednesday. Those caught falsely declaring on the permitted worker document face fines up to $19,826 for individuals and $99,132 for businesses.

The government said only permitted workers could put their children in care, provided no one else was present in the home that could supervise them.

Babysitting was permitted – whether paid or unpaid – so long as it was a continuation of an existing arrangement, a spokesperson said.

Athena Bangara, 37, said the sudden restriction on who could use childcare was stressful and anxiety-inducing for parents.

"I feel like one of those jugglers where someone keeps throwing new balls at me," she said.

The Clayton South woman works from home full-time for a university while home schooling her six-year-old boy. She has a two-year-old girl in childcare full-time and has no idea how she will manage.

Despite her husband being a police officer, her job doesn't qualify her to access childcare as a permitted worker.

"This has all just come up so quickly," she said. 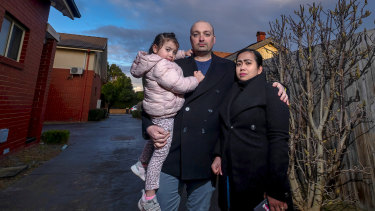 Chris Cox with wife Myra and daughter Sammy at their home in Oakleigh.Credit:Luis Ascui

For Chris Cox, 37, and his wife Myra, 29, the new arrangements will mean tough choices on who has to give up work and look after their three-year-old daughter.

Mr Cox runs a digital marketing business from home and is not in one of the permitted industries, while his wife works full time at Woolworths.

"If I've got my daughter at home I can't put her in front of a TV for eight hours, it's going to be difficult to function," the Oakleigh man said.

"It's just a bit confusing to know what we're doing."

Part-time primary school teacher Gemma Hibble, 37, was unsure how she would do her job while looking after her two children, aged three and four.

"I'm not sure how I can co-ordinate it all, it's a logistical nightmare," the Selby woman said.

"They're not school age, they're little kids that need lots of attention."

Premier Daniel Andrews conceded many parents who ordinarily accessed care would not be able to do so for the next six weeks.

"If I were to simply green-light the best part of a quarter of a million kids going to and from childcare every day ... then we will not drive these [coronavirus infection] numbers down," he said.

Opposition Leader Michael O'Brien called for the deadline to be extended on Wednesday afternoon, saying parents had not been given information despite the ban coming into effect in just hours.

"If the government can't answer people's basic questions about how this works, then it doesn't seem very fair to start fining people," Mr O'Brien says.

Parents who are blocked from using childcare services over the next six weeks of lockdown will be given 30 extra days of "allowable absences", or fee-free days, to prevent a damaging mass exodus from early education.

The extra days would be available to all Victorian families, not just those living in Melbourne's stricter stage-four lockdown zones, Education Minister Dan Tehan said.

Mr Tehan said the federal government support would mean parents who were not permitted workers would not have to continue to pay gap fees to hold their place at a childcare centre. This would prevent parents withdrawing from care to save money, he said.

But access to the extra allowable absences would be dependent upon centres agreeing to waive their gap fees.

Childcare centres can not by law be compelled to waive gap fees. Mr Tehan said the federal government's $33 million emergency childcare rescue scheme was meant to "incentivise" centres to do so.

To fund the extra allowable absences, childcare providers will get a 5 per cent "top-up" to payments they are currently getting as part of a $708 million transition payment scheme, brought in by the Morrison government after JobKeeper payments were cut off for childcare workers last month.

Services that experience an attendance drop of more than 70 per cent in the next six weeks will get a top-up payment of between 10 and 25 per cent on what they receive in the transition scheme.

The Morrison government said the support scheme would cost $33 million.

Mr Tehan said that on average childcare centres in Melbourne would receive between 80 and 85 per cent of their pre-pandemic revenue.

This would keep all centres viable and keep staff in a job, he said.

Georgie Dent, from parent advocacy group The Parenthood, said the Morrison government’s fee-relief package would only succeed if parents intended to keep their children in care beyond September, when the JobKeeper scheme is due to wind up.

She predicted many would not.

"If every family kept their children enrolled then this has the potential to keep centres open," Ms Dent said.

"But I think that telling parents to keep kids enrolled in a service that they potentially can’t afford beyond the next six weeks anyway is unreasonable."

Julie Price, the executive director of the Community Child Care Association, said childcare services had not had enough time to calculate the impact of the attendance measures or the federal funding package on their budgets.

"Our members want to do the right thing and the lack of clarity causes them enormous stress because they don’t want to be doing the wrong thing," Ms Price said.

Adam Carey is Education Editor. He joined The Age in 2007 and has previously covered state politics, transport, general news, the arts and food.

Tom Cowie is a journalist at The Age covering general news.

Bayern Munich V care Cuisance. The midfielder claimed Leeds and Marseille
Lyon can buy A package from Milan if they sell Rennes-Adelaide to Rennes
Simeone recovered from covid and returned to work with Atletico. Suarez will make his debut for the club on Sunday
Lampard on Politice and Ziese: We hope that in a couple of weeks they will be in optimal shape
Fulham joined the struggle for Modibo. Barcelona requires less than 25 million euros for a defender to buy Garcia
Inter gave defender Gravillon on loan to Lorient
Romero can move from Manchester United to Everton
Source https://www.smh.com.au/national/victoria/parents-to-get-30-more-fee-free-days-of-childcare-to-ward-off-exodus-20200805-p55iq1.html?ref=rss&utm_medium=rss&utm_source=rss_national

Rock concert for 7000 by Christmas

15 cyclones could hit this season

Inflation to miss RBA target for half a decade, say top economists

The 'risky' Vogue cover that made history but almost never happened

Global COVID-19 death toll could hit 2 million before vaccine in wide use: WHO

Waiting for Gobbo: Should the buck stop with the cops?

A cool drink on a balcony with a view towards freedom

We don't have to choose between the economy and lower emissions

My daughter didn't know me: The heartbreaking chapters of Chris Lawrence's diary

Six of the best: The stories behind photographer's top Sydney 2000 shots

Fears over the growing stockpile of zombie companies

Broncos have their eyes on Bellamy, but why would he join them?

Schwartz back in Collingwood and building again

NBN v 5G: The broadband battle is about to heat up

Confidence is a work in progress

Why the other premiers all want Daniel Andrews to succeed

Prince Charles is dipping his toe into grubby puddle of Sydney development but for what?

'I wish her well': James Packer has no hard feelings towards Mariah Carey before tell-all memoir

While Scott Morrison stays true to form, China is setting itself up for the future

Inside the global alliance attempting to stifle China

Your Daily Horoscope for Saturday, September 26