Before Mourad Kerollos stabbed his wife to death, he installed a GPS tracker in her car, secretly recorded her conversations and bombarded her with phone calls demanding photos of her companions, a court has heard.

Mr Kerollos is facing a judge-alone trial in the NSW Supreme Court over an accusation that he murdered Gihan “Gigi” Kerollos, 48, by stabbing her in the neck outside Prince of Wales Hospital in Randwick at about 8.30pm on May 18, 2019. 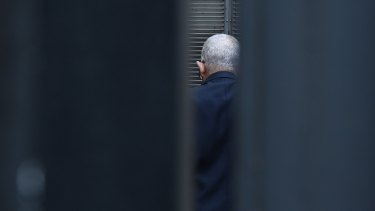 Mourad Kerollos is led into court by Corrective Services on Wednesday.Credit:Kate Geraghty

He does not deny killing his wife, but has pleaded not guilty due to mental illness. Acting Justice Peter Hidden must decide if Mr Kerollos was so mentally ill that he is not liable for murder, or if his liability is reduced to manslaughter.

A forensic psychiatrist is expected to tell the trial that Mr Kerollos was experiencing a mental disorder such as schizophrenia or schizoaffective disorder, which included auditory hallucinations, delusional beliefs, referential ideation, and a “delusion of infidelity” also known as “the Othello syndrome”.

On Wednesday, a statement of agreed facts was read out to the court which detailed that Mr Kerollos controlled his wife, disliked her friends, and believed he should be the only close person in her life. In the two weeks before she died, he repeatedly accused her of infidelity and their regular arguments became worse. 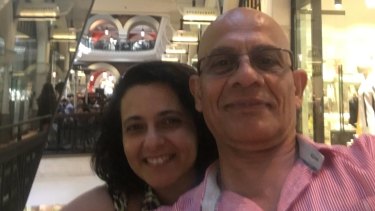 Mourad Kerollos (right) is on trial accused of murdering his wife Gihan.Credit:Facebook

Two days before the killing, Mr Kerollos was “rambling” and nonsensical when he sat down with his three adult sons and claimed their mother was having an affair. He plugged a USB stick into his laptop, played covert sound files, and showed them transcripts of recordings he had made of their mother.

“He had a long-range recording device, that’s how he got the recordings,” the facts state. “The accused played the recordings and kept saying the deceased was cheating on him.”

At some point in 2019, Mr Kerollos put a tracking device in his wife’s car and would show up where she was unexpectedly, including when she went to a lawyer in February to get advice about divorcing him. She had told no one about her appointment.

He also followed his wife’s car when she was teaching one of their sons how to drive, until he saw it was his son in the other seat.

Mrs Kerollos confided in work colleagues, telling one who saw her crying at work that her husband was giving her a hard time. She told the colleague that if she was to leave her husband, the house would be sold and her sons would have nowhere to live.

In the days before she died, Mrs Kerollos asked the colleague to witness a form to sign her superannuation over to her sons.

“My husband is being crazy, he is giving me a hard time, I have to save myself,” she said.

She told another colleague that her husband was recording her, had claimed to multiple priests in their Coptic church – including her cousin – that she was unfaithful, and made the “devastating” accusation that she’d had sex before they were married, despite virginity being an important part of their culture.

“I don’t know if he’s insane or just evil,” Mrs Kerollos told the colleague at the beginning of 2019.

Mrs Kerollos met with two work colleagues and requested domestic violence leave, and they told her to take as much time as she needed: “if it’s going to save your life, don’t worry”. During the meeting, her husband called 10 times and when she answered he demanded she turn the camera on to prove who she was with.

“On this day the deceased said ‘he is planning a kamin’. Kamin is an Arabic word that sort of means ‘ambush’. The deceased was scared,” prosecutor Pat Barrett said, reading from the agreed facts.

About a week later, Mrs Kerollos told the two women she had met with that she couldn’t talk to them any more, because her husband had “lost it” and was accusing them of being sex workers.

Catch all the day’s breaking news

At the end of each day, we’ll send you the most important breaking news headlines, evening entertainment ideas and a long read to enjoy.  Sign up here.

Presumed guilty until only the mud sticks: let’s tread carefully with minister accused of rape

There’s no presumption of anonymity in procedural fairness: why the PM and his accused minister face political pain

What children of the Amazon can teach us about weight gain

‘Stupidity at Its Finest’: Vehicles Drive Through Floodwater in Morgan County

From the Archives, 1994: Mafia link to letter bomb

Prince Philip moved to another hospital

‘No excuse for knee-jerk reactions’: Business calls for borders to open in line with vaccine rollout

Your Daily Horoscope for Tuesday, March 2

Meteor Flashes Across Yorkshire Sky as Sightings Reported Across UK

On the verge of cultural significance

Diamonds coach hits back at criticism of ‘rotating captaincy’

What kind of person defrauds family and friends like Melissa Caddick?

Labor gearing up to fight election on super, parental leave and climate policies

Bombers ask for clash against Hawks to be relocated

Buyers look to mum and dad for ‘free cash’

How football department cost cutting may impact the new season

Bolsonaro wants mining in the Amazon. An indigenous leader agrees

‘I thought there was no one else like me’: Push to build peer support into mental health overhaul

‘It didn’t overshadow my year’: Capewell leaving video in the past

No Kiwi fans a bonus for Aussies

Labour gains: Treloar in frame to take on Dees

‘Where is the money coming from?’: Official doubts cast on dam plans

Passionate young voices demand to be heard on climate crisis