Australia’s captain Meg Lanning believes cricket’s leaders will be guilty of a lack of ambition if they do not plan a future that includes women’s Test matches played more widely.

Speaking for the first time in response to comments by ICC chair Greg Barclay that he didn’t see women’s Test matches “as part of the landscape moving forward to any real extent”, Lanning revealed they had been the subject of extensive discussion by Australia’s players at a recent training camp in Brisbane. 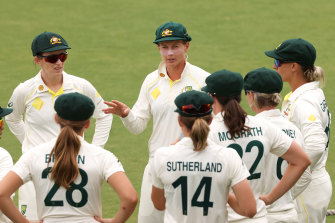 Meg Lanning speaks to her team during the women’s Ashes Test in Canberra this year.Credit:Getty Images

Lanning said the team found it “frustrating” to hear that the women’s game was being constrained in terms of its future horizons, arguing that developing the systems and structures required for long-form teams should be the goal of all participating countries.

“We understand not every country in women’s cricket is at the point where Test cricket is a main focus and hopefully that can continue to develop over time,” Lanning told The Age and The Sydney Morning Herald. “What was a touch frustrating was that we want to be ambitious, and see what’s possible.

“We understand that not every country has the platform and the pathways and the resources to get it up at the moment, but that doesn’t mean we can’t work towards it.”

Meg Lanning on the future of women’s Test cricket

“It’s going to take time and different countries are at different stages, but I don’t think we should rule things out and say it’s too hard. It’s something we can continue to try and work on. That’s the point we spoke about a little bit - we understand where it’s at, but let’s not just say we’re not going to try.

“T20 cricket has been a really big driver for the women’s game and will continue to be, and we understand that as well. But the chances we’ve had to play Test cricket have been incredible, we love it, and hope to be able to play more.”

After two Test matches at home last summer against England and India, Lanning’s world champion team will not play any this coming season, with a heavy Twenty20 focus including the looming Commonwealth Games in Birmingham and next year’s World Cup in South Africa. But Lanning pointed to South Africa’s recent pivot to playing Test matches as a sign of growth that, she hopes, will be followed up.

“At the moment we’ve got India, England and South Africa now playing as well,” Lanning said. “There’s some opportunities there, and while some of the other countries aren’t in a position at the moment to do that, that’s fine, but I don’t think that means we shouldn’t try and push for that in the future and see what happens.

“It’s about being open to the possibilities and being ambitious with where we want to go with the game. Hopefully in 10 to 20 years’ time, there are 10 countries that are playing Test match cricket, but it’s not about it all happening right at this moment. We understand that not every country has the platform and the pathways and the resources to get it up at the moment, but that doesn’t mean we can’t work towards it.”

The ICC’s path forward, agreed by member nations including Australia, places a heavy emphasis on white ball tournaments and series as the best way to make the women’s game as commercially successful as possible, and ultimately self-sustainable without any subsidy from men’s cricket.

“If you look at the way cricket is going, there is no doubt that white-ball is the way of the future,” Barclay said on radio during the men’s Test between England and New Zealand at Lord’s.

“That is the game that is sought after by the fans, where the broadcasters are putting their resources, and what is driving the money. Therefore, the countries that are developing women’s cricket will focus on that.

“In order to play Test cricket, you have to have the structures in place domestically, and they don’t really exist. So I can’t really see women’s Test or long-form cricket evolving at any speed at all.”

However, Lanning’s argument is that the gradual introduction of long-form games, including the playing of first team versus “A” team matches, rather than fully fledged domestic red ball tournaments, should be a viable part of that path.

“It takes time, it’s not going to happen overnight, but the key is there’s opportunities there to play the longer format and practice a little bit as well,” she said. “It can be difficult to be at the top of your game in a Test match when you only play one every two years. Hopefully that Australia v Australia A set-up is something we can get up and running in future.”