'Don't make my kids guinea pigs': The families refusing to return to school

Thousands of families are furious with the state government's decision to order students back to school from Monday and will either defy the directive or comply with "gritted teeth".

But it is likely there will be fewer school refusers than in March before the onset of remote learning, with students returning to school in greater numbers than expected in the first half of this term. 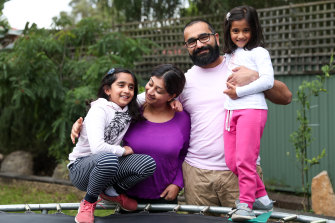 Ash and Niketa Parmar will keep their daughters Natalia, 8, and Aaliya, 5, home from school longer.Credit:Edwina Pickles

Ash Parmar from Toongabbie has started a Change.org petition, with almost 4000 signatures so far, demanding the NSW Education Department give parents a choice.

"Just to open up schools for political mileage or different pressures other than health, I don't think that I want to make my kids guinea pigs to that kind of behaviour from the government," Mr Parmar said. "This is just a bullying act to get everybody in."

Department guidelines state all schoolchildren must return on Monday unless they are unwell or have a medical certificate for an ongoing condition, while children with family members in high-risk groups also require a letter from a doctor advising them to stay at home.

Education Minister Sarah Mitchell told reporters last week: "It's a normal school week from next week and they need to be attending, rolls will be marked as normal and unexplained absences will be followed up."

Mr Parmar, who has two daughters aged five and eight at a local public school, said he would keep his daughters home regardless because he did not believe it was safe yet. He argues that remote learning should be kept in place for families who want it, since schools had already planned for it to continue for most of the term.

The Sun-Herald has spoken to a number of parents who feel the same as Mr Parmar and will keep their children at home.

Caroline from Earlwood near Marrickville, who wanted her last name withheld, plans to keep her two younger children home from school for a few more weeks. 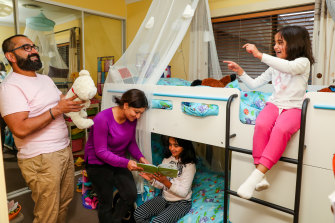 Ash Parmar has started a Change.org petition because he believes parents should have a choice about the return to school.Credit:Edwina Pickles

"I just feel we’re going from zero to 100 very quickly, rather the gradual one day a week, then two or three days a week, that was promised," she said.

Others will send their children back with great reluctance, upset that they no longer have a choice and are being threatened with punishment if they don't comply.

"I’ll send them back but it's through gritted f---ing teeth," said Mike Woodcock from West Pennant Hills, who has two children, aged 10 and 13.

Sonya, from Waverton near North Sydney, who also requested her surname be withheld, will send her teenage daughter back to school because remote learning will end but she feels "extraordinarily stressed" about the risk of infecting her elder son, who has Crohn's disease.

Meanwhile, many other parents are delighted school is back - and some were so keen for school to resume they sent their children back early.

At the end of first term, attendance fell to 9 per cent after Premier Gladys Berejiklian asked parents to keep their children home from school if they could, while schools would remain open for vulnerable children and the offspring of essential workers. That crept up after the holidays to 13 per cent in the first week of Term 2 and 15 per cent by the second week.

In the third and fourth week, families who had been participating in home learning were asked to send their children one day a week as part of a staged return. A spokesperson for the Department of Education said about a third of students were on site each day over the past two weeks, more than the quarter they had planned for.

Camavinga will choose real if there is an opportunity to leave Rennes in the summer
Nagelsmann about selling Werner: It's as if Lewandowski has gone from Bavaria. No one will be happy
Marotta may leave Inter at the end of the season. He is not happy with the pressure at the club
Lionel Messi: Football, like all life, will never be the same
Napoli does not want to sell Milik to Juventus and is ready to make a discount to Arsenal
Jordan Henderson: Liverpool still have work to do. We want to win as many matches as possible
Payet against pay cuts: I am the head of the family, I have financial obligations
Source https://www.theage.com.au/national/nsw/don-t-make-my-kids-guinea-pigs-the-families-refusing-to-return-to-school-20200523-p54vp6.html?ref=rss&utm_medium=rss&utm_source=rss_feed

Clashes, looting and buildings torched: US protesters defy curfews in dozens of cities

China ends sale of dogs for meat and fur

Angry protests spread across the world

Days of deja views and mondegreens

Sunday picnic: Trbojevic blows away the cobwebs and the Bulldogs

Universities, business and govt ‘must align’ to boost AI sector

Australia can be a ‘world leader in AI’

Protests over police killings in US cities

Here's to the united states of Australia

Rugby Australia cost-cutting to begin after auditors sign off books

Margy lost her island home in the bushfires. She won't be returning to rebuild

Just in time: as restrictions ease, Matt can invite his mum to his wedding

'Lack of transparency': Liu calls out Andrews on Belt and Road

'It's a real loss': Gippsland rocked by local newspaper closures

Man charged after death of apprentice plumber in Melbourne's CBD

Australia set to be part of Trump's G7 expansion

'Stuck in time': Julia Banks is back to combat political sexism

'It will not scare Hong Kong': China hits back at Trump threat

Treasurers at odds over call to abolish payroll tax

Britain 'could only cope with five cases a week', papers reveal

'The world is watching': Australians in LA protest over death of George Floyd

How COVID-19 is affecting music festivals of the future

National cabinet gives us our own united states

When it's hump day in fire-ravaged towns, people forget their troubles

Tips and race-by-race preview for Dubbo on Monday

Parents urged to stick by health guidelines after school evacuations

Binge's appeal is a vast library hidden behind Foxtel's paywall

Police Vehicles Plow Into Cordon of Protesters in Brooklyn

Understanding the legality of sex work

How your club is shaping up for the AFL season restart: Part three

Stir-crazy Victorians ready to hit the regions within days

‘THEY START SHOOTING’: National Guard called in as protesters clash

Storm back to 'drawing board' after 'embarrassing' play

Digital art 'bot' flirts and chats about poetry and pop