Dhaka: Firefighters battled for a third day to control a huge fire that killed dozens when it triggered explosions at a Bangladesh container depot, as officials warned of the risk of further blasts if the flames spread to chemicals stored nearby.

Drone footage from the BM Container Depot at Sitakunda, 40 kilometres from the southeastern port city of Chittagong, showed thick columns of smoke still rising from burnt-out containers some 46 hours after the blaze broke out on Saturday night (Sunday morning AEST). 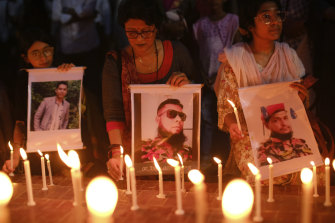 With the country’s poor record on industrial accidents under the spotlight, one official said safety guidelines had not been adhered to at the site, as a container with hydrogen peroxide was identified as the possible source of the fire.

The confirmed death toll was revised down to 41 from 49, including at least nine firefighters. More deaths are feared, however, as some of the injured are in critical condition, said Chittagong’s chief doctor Mohammed Elias Hossain.

Of the around 200 injured, 50 were rescue officials. Of those, 10 were policemen, while three firefighters were still missing, said city police official Alauddin Talukder.

Fire service official Monir Hossain said the depot had apparently ignored guidelines for storing chemicals. “We haven’t found any basic fire safety measures ... There were simply some extinguishers. Nothing else,” he said.

“Our firefighters are working hard, but due to the presence of chemicals it’s too risky to work close by,” said Anisur Rahman, fire service chief of the port city.

Troops were also deployed to prevent the spread of chemicals in canals and along the Bay of Bengal coastline, officials said.

With the cause of the fire still under investigation, fire officials said it may have originated in a container of hydrogen peroxide before spreading quickly from there. 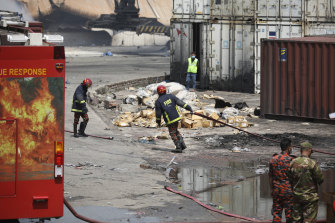 A firefighter pulls a hose at the BM Inland Container Depot where a fire broke out.Credit:AP Photo

“As far as our information goes, BM depot followed the usual process of operation in handling hydrogen peroxide,” he said. “What we fail to comprehend is the magnitude of fire and explosions that we observed.”

Riasat Saquif Quadir, a chemical engineer, said hydrogen peroxide was “a strong oxidizer and will initiate or sustain a combustion process quite readily”.

If a hydrogen peroxide solution evaporated on a combustible material such as clothing, “a fire may result spontaneously, without the need for an ignition source,” he added. 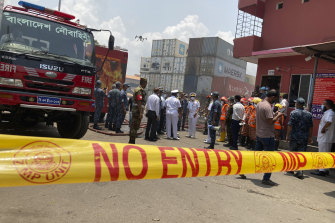 At the depot were about 800 containers filled with exportable items, some 85 per cent of which were ready-made garments, Sikder said. Bangladesh is the world’s second-biggest exporter of garments.

The privately-owned Dutch-Bangladesh joint venture shipping facility has promised compensation of 1 million taka ($AU15,000) to the family of each worker killed in the fire.

Lax regulations and poor enforcement have been blamed for industrial fires in the country that have in recent years led to hundreds of deaths.

In 2020, three people were killed after an oil tank exploded at a container depot in Chittagong’s Patenga area, while 54 died last July in a fire in a food processing factory outside the capital, Dhaka.