St George Illawarra have officially shut the door on a return for Gareth Widdop after securing the services of one of the game’s most promising playmakers.

The Dragons have re-signed local product Junior Amone to a three-year deal that will result in him being guaranteed a top-30 spot no later than 2022.

Several rival clubs were jockeying for Amone’s signature, but the 18-year-old opted to stay put.

Amone is related to South Sydney prop Tom Amone and Manly’s Fainu brothers, Manase and Sione. The Illawarra junior steered the club’s SG Ball side to last year’s premiership playing alongside halves partner Jayden Sullivan, another gun junior who could be in contention for an NRL debut in coming weeks.

The opportunity to potentially play first grade alongside Sullivan, who is also signed to the Red V long term, was too enticing for the five-eighth to turn down.

Widdop is considering an NRL return for family reasons, just 18 months after leaving the Dragons to join Warrington. Suggestions of a player swap with Corey Norman were quickly torpedoed after the Wolves indicated they have no interest in the out-of-favour Dragon. 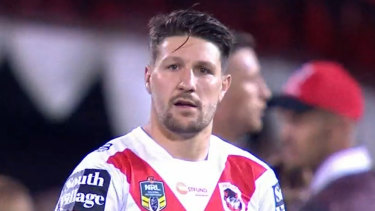 There won't be a Dragons homecoming for Gareth Widdop.Credit:ninevms

The joint-venture outfit is resigned to having Norman on its books for next year, unable to offload him because of his $850,000 price tag. Rival teams have shown no interest even if his wage is heavily subsidised.

The Dragons want to focus on developing their own talent and are banking on late bloomer Adam Clune, who recently recommitted to the Red V, and the young playmakers to steer the club back to the top.

It remains unclear who will take over permanently from departing coach Paul McGregor, but the Dragons won’t wait for a decision to bolster their roster.

The club is on the lookout for a prop with Melbourne’s Christian Welch a potential target. The former Maroons forward has made a strong comeback this season from an ACL injury and isn’t yet contracted for 2021.

The Dragons are also hoping to re-sign Jack de Belin, who is expected to learn if and when his court case will proceed later this month.

West ham offered 23+10 million pounds for defender fofan. Saint-Etienne refused
Andy Cole on £ 109m for Sancho: it's crazy money. Manchester United will not spend them at random
Juventus loaned Luca Pellegrini to Genoa
Palace, Brighton and Sheffield want to buy Brewster. Liverpool ask for 25 million pounds
Milan have offered 4 million euros for the striker Bodo-Glimt Gauge. He scored them in the Europa League
Atletico showed a photo of Suarez in three sets of uniforms
Lemar is Interesting to Leipzig
Source https://www.smh.com.au/sport/nrl/dragons-close-door-on-widdop-return-after-signing-gun-half-20200814-p55lu5.html?ref=rss&utm_medium=rss&utm_source=rss_feed