Dragonstone goes one better after near misses

Mark Newnham will send Dragonstone for a spell on a winning note after he showed the zip of classy sprinter in the Bob Charley Stakes at Randwick on Saturday.

Dragonstone had been finding one better all preparation on wet tracks but, back on the dry, his turn of foot was on show as he put a gap between himself and Prime Candidate and Mamaragan. 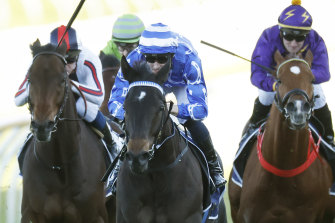 Dragonstone charges away with the Bob Charley Stakes.Credit:Getty

“He has only been a good track twice in his career and has won both times,” Newnham said.

“He has a very sharp sprint, which he can hold for 300m, and it is going to win him a lot of races.

“He can go for a break with that winning feeling. Being a gelding, there is a bit of racing in front of him and we are going to see him in better races in the spring.”

Tom Sherry confirmed that Dragonstone loved being back on the firmer footing.

“He has been running well on heavies but he is only small. He has a big heart and he definitely appreciated getting back on a dry track,” he said.

The postponed Doomben Cup meeting in May put Sheeza Belter on the road to the JJ Atkins and the former West Australian filly is now a group 1 winner.

It was a sweet victory for another of WA’s finest, Willie Pike, who went for home early in the straight and got a break that was enough for Sheeza Belter to hold off colts Political Debate and Brosnan.

“We weren’t even thinking about the mile with her until the Carter Stakes was called off last month,” co-trainer Paul Snowden said.

“She’s always been tough and resilient at home; she cops the work. Everything about her suggested she is going to get to that really good level, and she will be better again in the spring.”

Numerian to use Q22 as launching pad for the spring

Annabel Neasham has all the spring majors in her sights with Numerian after his all-the-way victory in the Q22 at Eagle Farm on Saturday.

The six-year-old came to Australia with form around Cox Plate winner Sir Dragonet and Armory, but it might be the Caulfield Cup that is his target in the spring rather than the weight-for-age championship at Moonee Valley.

“I don’t know where he will fall in the handicap for the Cups after that win, but he is going to be a horse we’re going to have a bit of fun with from now on,” Neasham said.

“He is only going to get better, and he might be better over the longer trip.”

Tommy Berry controlled the race from the front and was able to back off the tempo in the middle stages before getting to the line strongly.

“The best part of his race was the late, he just kept getting stronger,” Berry said. “He just feels like a real classy stayer that is going to be a mile-and-a-half horse.”

Favourites Huetor and Maximal got well back in the field and never got into the race because of Berry’s tactics.

“On fast ground like that, it was always going to be very hard for horses back in the field to make ground when I got that breather,” Berry said.

Aussies have a look at Ascot ahead of the Royal meeting

The Australian contingent went to Ascot on Friday morning to familiarise themselves with the tricky undulating straight before the Royal meeting this week.

Chris Waller didn’t send out Nature Strip or Home Affairs to set any records before fronting the English press.

“What they did this morning was their first piece of fast work for two weeks, so they needed a bit of stimulation,” Waller said.

“I learned from the Brazen Beau trip that it would be achievable to one day win a race here. We almost pulled it off, and we almost got it right, so not much has changed. We have horses with the right credentials.

“Both Nature Strip and Home Affairs only need to replicate their Australian form to be capable of fighting out the finish with the best in the world. That’s all we’re concentrating on.”