The second wave of COVID-19 has thrown up a minefield for federal government and ACT health officials to navigate. While most federal MPs are free to travel to Canberra unencumbered, it’s a different story for their Victorian counterparts. 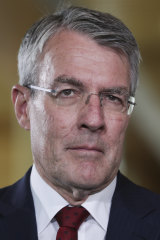 Federal Cities Minister Alan Tudge scored an exemption to attend Canberra last Friday, along with a lengthy list of instructions on how to stay COVID-free. Treasurer Josh Frydenberg and Health Minister Greg Hunt have no doubt been handed the same.

But there’s less certainty for those further down the pecking order, including Labor’s Victorian team. Will the MPs have to self-isolate for 14 days before being allowed to attend Parliament? Or will they have to take a COVID test to prove they’re fit to travel?

All of these questions were discussed during a tense phone hook-up last week of Labor’s Victorian Right faction. Things got testy, apparently.

Shadow Attorney-General Mark Dreyfus and Opposition minister for infrastructure Catherine King had a showdown regarding sitting week, which starts on August 4. King, who represents the regional electorate of Ballarat, expressed concerns about MPs bringing the virus back to unaffected communities.

As the discussion progressed, Dreyfus argued it was a constitutional right for MPs to go to Parliament, and said he would “take up the cudgel” to fight for MPs to attend. He added that he wouldn’t be dictated to by some “petty bureaucrat” in Canberra.

We guess the so-called “petty bureaucrat” in question is ACT Chief Health Officer Kerryn Coleman, but Dreyfus declined to answer any of CBD’s questions on Thursday.

ALP deputy leader Richard Marles, according to sources, also encouraged MPs to consider front page implications of the cohort travelling en masse interstate, or the implications if they somehow became responsible for further spreading of the disease.

Or, as one source on the call put it: “We need to consider the pub test and how punters are going to respond to Victorian MPs going in a big group to a different state during a pandemic.”

Of course, the actual job of nutting out a solution falls to Attorney-General Christian Porter, the Prime Minister’s office, Labor representatives including Tony Burke who are negotiating with Coleman and ACT Health officials. Those familiar with the discussions said it was most likely they would adopt the same skeleton Parliament and pairing arrangements as when the pandemic first broke out. A spokesman for Porter said: “Present arrangements remain unaltered but we are closely monitoring the situation in Victoria.”

THE PLACE TO BE 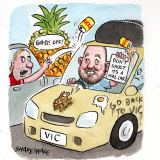 On the road with Andrew Hall. Illustration: John ShakespeareCredit:

Former Commonwealth Bank corporate affairs boss Andrew Hall is making the most of his gardening leave before taking up his new post as chief executive of the Insurance Council of Australia in mid-August.

Hall, who previously had stints at Woolworths and at the Nationals Party, has headed to Queensland for a couple of weeks with partner Shane Kruger, hiring a car and planning a road trip from Brisbane to Cairns.

One problem. The couple’s hire car, courtesy of Hertz, has a Victorian number plate. This hasn’t pleased the locals. One man even thumped the roof of his own Commodore while shouting at the bemused couple to “f--- off back south”.

Education State number plates are on the nose elsewhere. In Canberra, applications to convert Victorian licences into ACT ones surged 150 per cent in June. Hall has hastily fixed a sign to the car pointing out it’s a hire. And for the record, he is as Queensland as former prime minister Kevin Rudd. Both were born in the Sunshine Coast town of Nambour.

The ABC loves its youthful/diverse/lifestyle website ABC Life, but is still axing it.

That’s the message from ABC managing director David “safe pair of hands” Anderson as he stood firm in a missive to staff on Wednesday evening that up to 250 job cuts would occur. But the MD did offer a free surgical mask for those staff who needed it for work or travel during the pandemic.

Anderson told the troops the site, which is being folded into a regional and local offering, with half its staff going, had made an “important contribution” but that did not alter the fact he needed to ensure the ABC was financially sustainable.

“Teams across the ABC cannot continue to operate as they have, with the funding cuts that this organisation faces," he said.

Meanwhile, mild-mannered Communications Minister Paul Fletcher, who has been telling everyone that the ABC’s annual $1.1 billion of funding was rising each year, met his comeuppance courtesy of the ABC Fact Check unit, run in conjunction with RMIT. It published a 3600-word examination of Fletcher’s claim, unsurprisingly finding it “misleading”.

Then the public sector union the CPSU, crunching its own numbers, revealed the ABC was only axing the equivalent of 151 jobs. Sources at the broadcaster say that it has always said it would cut “up to” 250 jobs, and staff consultations were not finalised. One for ABC Fact Check, perhaps?

Stephen Brook is CBD columnist for The Age. He is a former features editor and media editor at The Australian, where he wrote the Media Diary column and hosted the Behind The Media podcast. He spend six years in London working for The Guardian.

Ferdinand on Barca breeding: Bad. They still rely on old-timers
Inter wants Perisic back, even if Conte remains in the team. Bayern hopes to buy the player for less than 20 million euros
Rudi Garcia on Lyon's chances against city: the quarter-Finals showed that the favourites can also be beaten
CSKA agreed a 5-year contract with Fuchs. The transfer is estimated at 7-10 million euros
Ferdinand on Messi at Barca: Will he want to stay, given the results and the team's performance? Does he have time to wait?
I would not be surprised if Pochettino is appointed in less than 3 days. Ex-Barca winger Carrasco on the club's new coach
Alaba about Mueller: we are Glad that Bayern have such a player
Source https://www.smh.com.au/national/dreyfus-ready-to-fight-for-right-to-cross-border-20200716-p55csv.html?ref=rss&utm_medium=rss&utm_source=rss_national