The smallest national flock since the devastating Federation Drought of 1903 has produced a record-low number of wool bales but farmers believe Australia will once again ride the back of sheep to economic strength.

New data shows just 63,000 tonnes of wool came out of the nation's shearing sheds in the three months to the end of June, the smallest quarterly clip on record. Thirty years ago the nation produced 280,000 tonnes for the same quarter. 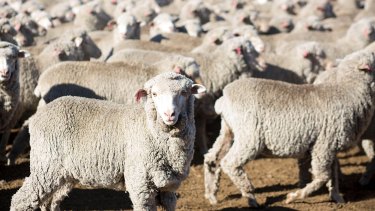 Drought has pushed Australia's sheep flock to its lowest level in more than 100 years. Credit:Kara Roselund

The flock peaked at 180 million head in the 1970s, a time when rural Australia truly rode on the sheep’s back. Those booming prices gave way when the then-guaranteed minimum floor price collapsed in 1991.

Today, visitors to rural areas are more likely to see cattle, pigs and chicken as farmers have moved away from sheep as the nation's main livestock.

Despite the national flock declining nearly two-thirds in the past 40 years to just 63 million, sheep and wool industries are bouncing back, nearly doubling their combined value in the past 20 years to now reap a combined $9 billion a year.

"The sheep flock has declined but the value of farm enterprises has gone up. That’s because the value of wool and sheepmeat has gone up, and the industry has transformed itself to focus on quality," Mr Heath said.

For wool, about 30 years ago the fibres of Australian merinos averaged 22 microns in thickness, which has been reduced to 18 microns.

In sheepmeat, "the eating quality of lamb has increased and so have prices," Mr Heath said.

The record-low June quarter wool clip reveals the scale of the recent drought - which farmers hope is starting to break with good falls in farming districts across Victoria and NSW and in some areas of Queensland.

Some of the impacts are reminiscent of one of the worst dry spells on record - the Federation Drought between 1891 and 1903.

At that time, Charles Bean, who went on to become the Australia’s official historian for World War 1, wrote a series of articles for The Sydney Morning Herald about his travels along the Darling River.

"A series of terrible, lean years saw the West turn into nothing else than a desert," Bean wrote.

"The sheep were held on the runs, in the hope of rain, till they were too weak to travel. There was not a blade of grass on the surface; but the stock walked over it until it was worked into a hard crust. Over parts there swept a loose sand which covered up even the fences, and actually turned patches of grass land into sandy wilderness."

"The national flock dropped, there was constant hand feeding, lack of water. But thankfully the seasons have turned, but we are very mindful there are still vast areas of Queensland that are drought declared and the Monaro region of NSW is still doing it tough - but thankfully they got rain in the past month."

The wool market opened last week after its winter break with prices down about 25 per cent, with the COVID pandemic reducing demand.

Rabobank senior analyst Angus Gidley-Baird said he was surprised at the size of the price drop, but "our outlook is for it to come back up again".

Sheepmeat has also been damaged by COVID, with slaughter rates for the past month down 30 per cent on maximum volume.

The good news is "reduced supply has held prices up," Mr Gidley-Baird said. "There aren’t many sheep producing countries in the world and whatever growth in demand there is, with major markets in the US, China and the Middle East, Australia will have to meet most of that demand."

West ham offered 23+10 million pounds for defender fofan. Saint-Etienne refused
Andy Cole on £ 109m for Sancho: it's crazy money. Manchester United will not spend them at random
Juventus loaned Luca Pellegrini to Genoa
Palace, Brighton and Sheffield want to buy Brewster. Liverpool ask for 25 million pounds
Milan have offered 4 million euros for the striker Bodo-Glimt Gauge. He scored them in the Europa League
Atletico showed a photo of Suarez in three sets of uniforms
Lemar is Interesting to Leipzig
Source https://www.smh.com.au/politics/federal/drought-drives-sheep-numbers-to-record-low-but-rain-grows-hope-20200814-p55ltx.html?ref=rss&utm_medium=rss&utm_source=rss_feed