Manila: Philippine President Rodrigo Duterte's mouth has landed him in hot water again, this time for kissing a married woman on the lips in front of thousands of his cheering supporters.

Duterte, known for his verbal outbursts and other antics, is being slammed by critics for the kiss, which took place on Sunday during a town hall-style meeting with overseas Filipino workers in South Korea. One senator called the act "a despicable display of sexism and grave abuse of authority".

Duterte sought a kiss from the woman after he called her on stage to give her a copy of a book at the event in Seoul. When Duterte asked if she can explain to her husband that the antic was just a joke, and she said yes, the President leaned in and kissed her as thousands erupted in cheers. 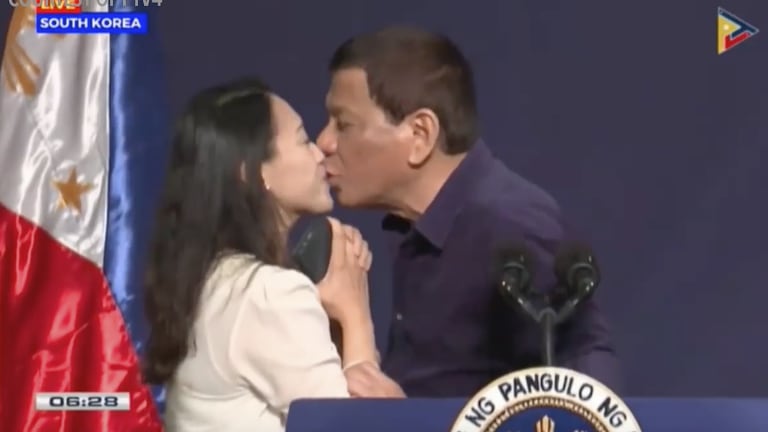 The state-run TV network aired the scene live in the Philippines.

While the woman has defended the kiss and said she was thrilled by her encounter, others said the President went too far.

"President Duterte acted like a feudal king who thinks that being the President is an entitlement to do anything that he pleases," said Senator Risa Hontiveros, who asked the public not to pass judgement on the woman. "Even if the act was consensual, it was the President, possessed of awesome, even intimidating, power who initiated it." 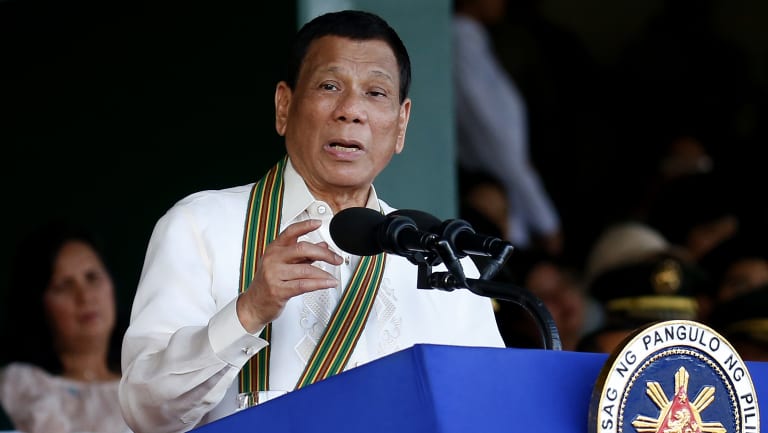 Duterte has previously come under fire for vulgar and sexist comments.

Aside from growing alarm over his bloody crackdown against illegal drugs which has left thousands of mostly poor drug suspects dead, Duterte has come under fire from women's groups for sexist remarks, including one where he told troops to shoot female insurgents in the genitals during a public outburst against communist guerrillas.

He has also publicly kissed women in the past, including at rallies during his campaign for the presidency.

The latest incident came near the end of a two-hour rambling speech, when Duterte offered the crowd a book about alleged corruption and abuse in the Catholic church. He pointed at two women.

"There's payment for this, a kiss. You in white, are you ready to engage in kissing? Come here," the 73-year-old Duterte said as he summoned the women to the stage.

One of the women gave the President a peck on the cheek. The other woman reached for the President's hand and put it on her forehead in a traditional gesture of respect for an elderly. But the President asked her to come closer for a kiss, pointing to his lips.

Amid the roar of the crowd, Duterte asked if the woman was married and if her husband was around. He inquired if she could explain to her husband that what they were about to do was just a joke.

She said her husband wasn't around and replied yes to the President's other question.

"Make him jealous," the President said.

Duterte then leaned in and kissed the visibly overwhelmed woman, who screamed in joy and covered her face. He then hugged her.

"Don't take that seriously," Duterte later told the crowd. "It's just to give people fun."

The woman, who is married to a South Korean man and has two daughters, later said in a TV interview that she was thrilled by her face-to-face encounter with the President. She said there was "no malice" in the presidential kiss, which was meant to dazzle the crowd.

The new Bundesliga season starts on September 18
Thomas Tuchel: Atalanta is pressing and scoring a lot. PSG must play carefully
Barcelona have agreed with Lautaro, but the transfer depends on the sale of Coutinho
Mourinho about the Amazon documentary: I don't like the feeling that I'm in Big brother
Aguero will not have time to recover for the match with Real Madrid
Marcelo will miss the rest of the season in La Liga due to an adductor muscle injury
Telephone Interview, disinfection of the rails, the ban lifts. We checked-antivirus measures in the NPL really work (well, almost)
Source https://www.theage.com.au/world/asia/duterte-slammed-for-kissing-married-woman-before-huge-audience-20180605-p4zjg3.html?utm_medium=rss&utm_source=rss_feed