Eight years in the making: Storm's Eisenhuth ready for game No.3

Tom Eisenhuth can joke about it now, but the surgical scar across his throat reminds him of the injury which almost cost him far more than missed games.

On the opening night of the 2019 NRL season the 27-year-old made his debut for the Melbourne Storm in the final minutes of the win over the Broncos at AAMI Park. 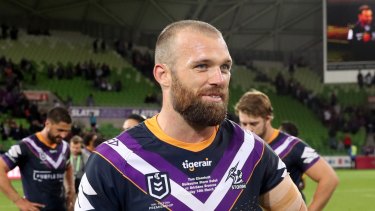 Tom Eisenhuth following his Storm debut in round one.Credit:NRL Photos

He had already experienced an injury-interrupted career which had resulted in one NRL game with Penrith in 2012 and otherwise battling to stay at the level until moving to the Storm halfway through last season.

During his Storm debut, he took a shot to his throat during those few minutes on field and thought little of it during post-game celebrations, even though his voice was croaky.

But later that night he was forced into hospital with breathing difficulties and doctors discovered he had a fractured larynx.

He ended up in an induced coma and woke a few days later to find a tube in his throat and his NRL career on indefinite hiatus as his medical team figured out his future.

"It was my first game for the club and it was hard to bring me down after the game [although] trying to talk after the game was tough,” Eisenhuth said.

"Just going from such a high to being in the ICU [intensive care unit] and waking up some time Saturday from my two-day sleep.

"I had a bit of time to think laying in bed although I had messages and visits from my teammates which helped reduce that time. It's a situation like that that brings out the best in people."

Eisenhuth ended up sidelined for 13 weeks and, after four games in the Queensland Cup, is listed to play for the Storm when they take on the Gold Coast at CBUS Super Stadium on Sunday.

Training with the Storm has helped him rebuild his confidence when taking contact, but Eisenhuth had a scare in his first game back in the Queensland Cup after copping a knock to his throat.

"We were into the game a little bit so I was wondering if it was my throat or my lungs [match fitness] that are struggling," Eisenhuth said. "It turns out it was just the lungs. Little thoughts go through your head but I was just trying to put that to the side.

"For that to be no dramas was a real confidence boost as when I felt it again I thought 'is this going to just flare up over anything?' It was just a matter of building up some confidence."

Eisenhuth will likely come off the bench on Sunday. State of Origin stars Josh Addo-Carr, Will Chambers, Cameron Munster and Felise Kaufusi are being rested and Christian Welch is suspended, but the Storm still back themselves to overcome the struggling Titans.

"I'll get through this one, hopefully play well and see how I go after that," Eisenhuth said before cheekily adding: "Just surviving would be nice."

Ronaldo scored his 27th goal in Serie A, converting a penalty in the game against Atalanta. Immobile has 29 balls
Sterling scored 27 goals for the season and broke his record. He scored a hat-trick against Brighton
Three Atalanta players have scored 15+ goals in the Serie A season. This is the best result since 1952
Setien on the title fight: Barcelona does everything possible, but Real Madrid wins all the matches
Lampard after 0:3 with Sheffield: Chelsea must fight for the top 4. I've learned a lot
Simone Inzaghi: Scudetto for Lazio-a place in the Champions League. Talk of winning Serie A was exaggerated
Player the Premier League has admitted that he is gay anonymously. The letter was sent to the newspaper by the Foundation named after a football player who committed suicide after coming out
Source https://www.smh.com.au/sport/nrl/eight-years-in-the-making-storm-s-eisenhuth-ready-for-game-no-3-20190719-p528xq.html?ref=rss&utm_medium=rss&utm_source=rss_feed

No need to skirt around versatile wardrobe staple

Vegan food trailer to steal a ‘pizza’ our hearts on Coast