The mother of a young woman who fatally overdosed at a Sydney music festival said the pill-testing debate was “getting beyond a joke” after she received a first-hand look at the logistics of testing at the Splendour in the Grass festival on Saturday. 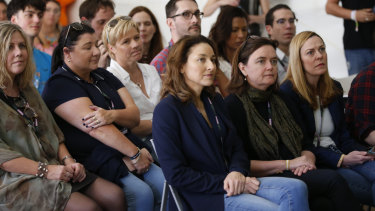 “I guess the disappointing part of all of it was this has been 20 years in the making, and Alex was 19,” Ms Ross-King said.

“This is why I’m feeling like I need to help promote that change and that behaviour because someone else is going into labour and I don’t want their kid, 20 years from now, to be in the same position Alex and our family are.

“Enough is enough. It is getting beyond a joke now.”

Emergency medical specialist David Caldicott, who has been advocating for, and researching pill testing for two decades, conducted the role-play demonstration for a crowd of about 150 on the mechanics of how a festival-goer would get their drugs checked.

He was forbidden from actually turning the testing machine on, even to check a legal substance.

“Many of the products that have arrived on the market, particularly in Australia, are far more dangerous than the products they have been designed to replace.”

Young festival-goers, desperate for information about how to consume drugs more safety, plied Dr Caldicott with questions about pill potency and the risks after his talk.

“I thought it was fantastic that some of those kids were sitting there asking questions,” Ms Ross-King said.

“For me, that’s who we need to be listening to, experts with knowledge and experience.”

Deputy State Coroner Harriet Grahame was seated in front of Ms Ross-King for the demonstration as part of her research for the inquest into the deaths of six young people at music festivals, as well as harm-reduction measures including pill testing and the role of police and security staff.

The inquest is examining the circumstances of Alex Ross-King’s death along with those of Joshua Tam, 22, Callum Brosnan, 19, Joseph Pham, 23, Diana Nguyen, 21, and Nathan Tran, 18.

Juventus and Manchester City are the leaders in the fight for Adam Traore
Pep Guardiola: I Want Messi to stay in Barcelona
Kike Of Setian: Of course, we can win the championship. This is evidenced by facts and mathematics
Bartomeu on Messi: We have to renew the contract. Leo told me that he wants to finish his career at Barca
Chelsea are willing to pay Havertz 8 million euros a year and will soon start negotiations with Bayer
Showsport - about the crisis in Barcelona: Bartomeu set up Setien, star senators impose tactics on coaches
Barca President: VAR is being used unfairly. After the restart, there are solutions that help some and harm others
Source https://www.smh.com.au/national/nsw/enough-is-enough-festival-victim-s-mother-wants-pill-testing-implemented-20190720-p5292t.html?ref=rss&utm_medium=rss&utm_source=rss_national

Prince Harry and Meghan Markle are ‘turning me into a Republican’: Campbell Newman

Rowell out for three months after opting for shoulder operation

Daniel Andrews will get away with COVID-19 ‘catastrophe’