Even Barassi, the great visionary, couldn't have imagined this

At the height of his coaching powers, Ron Barassi, then the most famous man in Australian football, was asked by a journalist what he'd like to be doing in 20 years.

"Coaching a team in Sydney," he replied. It was the 1970s and Barassi, coach of the dominant North Melbourne, dreamt of a competition reaching beyond the staid, 12-club Victorian Football League. 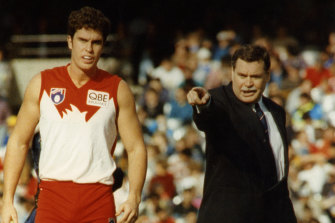 True to his vision, Barassi was coaching a Sydney club within two decades and many would admit that if he hadn't, the AFL as we know it might not exist today.

In 1978, a year after Barassi had coached the Kangaroos to a second VFL premiership, academic Ian Turner coined the term the "Barassi Line" to describe the geographical boundary and "cultural rift" that divides Australia’s loyalties between the codes of football and rugby league.

Turner argued that the dividing line – which runs from Arnhem Land through Birdsville, Broken Hill and Canberra – should be named after the VFL great because no one on the rugby league side would know anything about Australian rules except its favourite son.

But even Barassi, an evangelical advocate for a national competition long before it was in fashion, could never have imagined a home-and-away round played entirely north of his own "line".

Such are the times that there was no debate about shifting the entire competition from its spiritual home and heading north. The usual tribalism has been put aside by a football-starved public that has its priorities right.

But round six, 2020 – with three games in Sydney, four on the Gold Coast and two in Brisbane – is not the first time a home-and-away round has taken place without a game in Melbourne.

In June 1952, the year before Barassi began his playing career, the Australian National Football Council convinced the VFL and the majority of its clubs to take the show on the road.

The Football Record would describe it as a "laudable attempt to 'spread the gospel' of Australian Rules football in the Northern States and to acquiesce in the desire of certain country centres of Victoria to see a full-blooded game of football by leading League clubs". 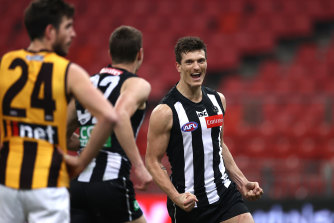 Officially it was known as the national round. The media would dub it the propaganda round.

Richmond would meet Collingwood at the Sydney Cricket Ground, where Argus football writer Hugh Buggy wrote, the "rugby-minded" city was covered with publicity placards carrying the message "this is not an exhibition game. This is the real thing. This is fierce red-blooded Australian football. No quarter given or asked".

The Magpies won in the wet but vowed to not travel away again.

Geelong and Essendon were drawn to play at the Brisbane Exhibition Ground but five inches of rain delayed it to Monday night. It became the first time a VFL match for premiership points was played under lights. 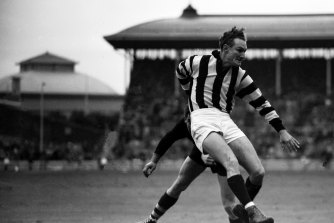 Collingwood and Richmond played some 'fierce, red-blooded football' at the SCG in 1952.Credit:Ross Freeman

John Coleman kicked 13 goals and the Bombers won by 69 points. But six Essendon players, including Coleman, suffered air sickness on the flight home.

If the logistics of organising "hubs" caused by the Victorian COVID-19 outbreaks seemed complex, in 1952 the Tuesday morning flight from Brisbane wouldn’t arrive in Melbourne until 11pm.

With Essendon airport closed, the pilot was forced to land at Mangalore airport, two hours north of Melbourne.

The Cats were also furious. Club president Jack Jennings would say: “Our team didn’t return to Geelong until 7pm. This round has completely disorganised our training schedule. Brisbane is too far away. We don’t think it's right to take players 1300 miles to play a game for premiership points”. 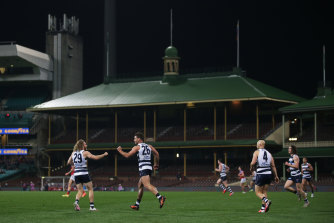 Geelong beat the Brisbane Lions at the SCG on Thursday. It was a Geelong home gameCredit:Getty Images

Heavy fog delayed Melbourne's players on their way to Tasmania, where a crowd of more than 18,000 watched Fitzroy defeat the Demons by 20 points at North Hobart Oval. It would be almost 40 years until a VFL match would return to the Apple Isle.

North Melbourne and South Melbourne would travel to Albury for the "battle of the border". Footscray and St Kilda played in the Gippsland town of Yallourn, where, courtesy of an open-cut coal mine, neither the ground nor the town longer exists.

Carlton and Hawthorn met at Euroa in the most thrilling event to happen in the tiny town since the Kelly gang staged a daring raid on the National Bank, escaping with £2000 worth of cash and gold 70-odd years before.

But, unlike this weekend, about 40,000 could still head along to the Melbourne Cricket Ground, where a star-studded Victoria defeated Western Australia by 11 points. 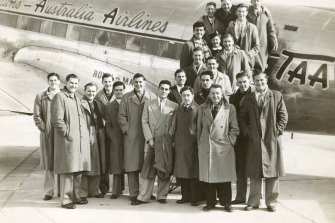 The South Melbourne team flew to Albury for their encounter with North Melbourne.Credit:The Age

In the weeks that followed, clubs and fans remained divided on whether the propaganda round would be a one-off. Age columnist Percy Beames would write that, provided the Australian National Football Council could gain the support of the Victorian Football League, "it's almost certain there will be another round of away matches in 1953".

But the self-interest of clubs won out. The propaganda round would remain a one-off. Until now.

In a competition that played through both world wars, the coronavirus outbreak has posed the biggest threat to its viability and future.

Announcing that the 10 Victorian teams would relocate north this week, AFL chief executive Gillon McLachlan said the "sheer daily drama" footy fans were experiencing was something the game had never seen

"How this season is unfolding is unpredictable and unreal," he said.

In 1996, during the AFL’s centenary celebrations, Barassi declared the game he loved would be "dead in the water by the 22nd century" if it was not embraced in the northern states.

But even the game’s greatest visionary could not have imagined a scenario where football would be lost without them.

Marotta on the match with Bayer: I am very optimistic. Inter wants to win the Europa League
Manchester United are unhappy with the way Borussia was leading the negotiations for Sancho. The Germans did not want to communicate directly
Liverpool have announced the purchase of defender Tsimikas from Olympiakos
Bordeaux appointed ex-assistant Blanc Gasse as head coach
Sterling on the win over Real Madrid: Manchester City were incredibly hungry. We have the strength to succeed in the Champions League
Galliani about Pirlo in Juve: Andrea was laughing like a madman when I called to congratulate him
Villarreal will pay no more than 20 million euros for Valencia captain Parejo and midfielder Coquelin
Source https://www.smh.com.au/sport/afl/even-barassi-the-great-visionary-couldn-t-have-imagined-this-20200710-p55aw5.html?ref=rss&utm_medium=rss&utm_source=rss_feed