London: Movie star Johnny Depp has told London's High Court that his ex-wife Amber Heard or her friend had defecated in their bed in what he described as a "fitting end to the relationship".

Giving evidence over four days in his libel action against Britain's Sun newspaper, which labelled him a wife-beater, Depp has faced allegations that he physically attacked Heard on at least 14 occasions during a three-year period from 2013. 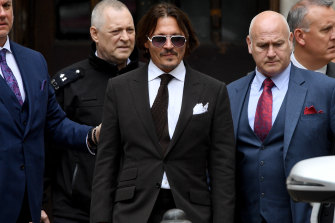 The court was told on Friday that one such incident followed a party to celebrate Heard's 30th birthday party in April 2016, the Sun's lawyer Sasha Wass said.

The Pirates of the Caribbean star was late because he had been at a meeting with his business manager, where he had received bad news about his finances. At their home, Depp was accused of attacking Heard when she criticised him for being late, throwing a magnum bottle of champagne at her, which missed, and grabbing her hair.

The following day, the cleaner found faeces in their bed, something Wass said Depp had said in text messages he thought hilarious. However, he told the court this "absurd" moment was when he decided they had to end their marriage. 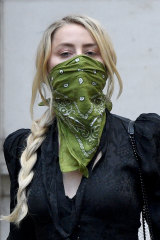 Depp's ex-wife Amber Heard blamed the faeces incident on one of their dogs, the court heard.Credit:Getty Images

"I was convinced it was Miss Heard herself or one of her cohort involved in leaving human faeces on the bed," he said. "I thought it was a strangely, oddly fitting end to the relationship."

When the couple next met up in May when Depp went to collect some possessions from their home, a row erupted over the faeces incident, which Heard blamed on one of their dogs.

Depp denied he had been spoiling for a fight and said Heard had brought up the issue, telling the estate manager in a phone call it was a "harmless prank".

In an ensuing argument, Depp was accused of throwing his phone at Heard, striking her on the cheek, a charge he rejected. Days later she sought a restraining order against Depp and the court was shown pictures of Heard with a bruise on the cheek.

However, a police officer who was called to the scene, Melissa Saenz, told the court she had a clear look at Heard's face and saw no sign of injury, nor any damage to the home as she and her friends alleged.

Depp said the wife-beater accusations meant he had gone from "Cinderella to Quasimodo in 0.6 seconds".

The court heard he sent a text to his business manager in August 2016 in which he called Heard a "50 cent stripper" who was "begging for total global humiliation".

"I have no mercy, no fear and not an ounce of emotion, or what I once thought was love for this gold digging, low level, dime a dozen, mushy, pointless dangling overused flappy fish market," said the text, read by Wass.

During four days so far in the witness box, Depp has been accused of repeatedly attacking Heard, whom he met in 2011 and married four years later, during rages when he was drunk or had taken lots of drugs. 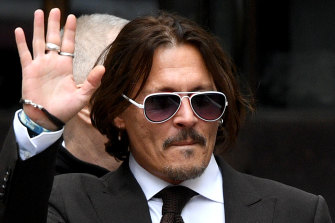 Depp has given evidence over four days in his libel action against Britain's Sun newspaper.Credit:Getty Images

The court has been told that during these rages he repeatedly slapped her, kicked her, headbutted her, pulled out clumps of her hair, trashed a house where she kept her clothes, and threatened to kill her.

According to Wass, Depp had an alter ego, which both he and Heard referred to as "the monster", who he turned into after heavy drinking or drug-taking.

"Every time I didn't comply with her... she could call it the monster," Depp said. "The monster grew into whatever she wanted it to be."

Depp has rejected all the allegations and says Heard is lying, telling the court she physically assaulted him, hurling a bottle at him on one occasion and severing the tip of a finger.

"I have slept on many bathroom floors as a result of trying to avoid any violent confrontation," he said. He says Heard's claims are a hoax and part of a dossier she had been collecting as "an insurance policy".

The trial is due to last three weeks.

Heard, who has also been in court for Depp's appearances in the witness box, is due to give evidence herself next week as is Depp's former long-term partner Vanessa Paradis and his ex-girlfriend, actress Winona Ryder.

Manchester United presented their away form for the 2020/21 season
Ferdinand on Barca breeding: Bad. They still rely on old-timers
Inter wants Perisic back, even if Conte remains in the team. Bayern hopes to buy the player for less than 20 million euros
Rudi Garcia on Lyon's chances against city: the quarter-Finals showed that the favourites can also be beaten
CSKA agreed a 5-year contract with Fuchs. The transfer is estimated at 7-10 million euros
Ferdinand on Messi at Barca: Will he want to stay, given the results and the team's performance? Does he have time to wait?
I would not be surprised if Pochettino is appointed in less than 3 days. Ex-Barca winger Carrasco on the club's new coach
Source https://www.theage.com.au/world/europe/ex-wife-or-friend-defecated-in-their-bed-in-fitting-end-to-marriage-depp-tells-court-20200711-p55b3f.html?ref=rss&utm_medium=rss&utm_source=rss_feed