One of NSW’s most exciting provincial sprinters is set to return with a bang at Monday’s feature Goulburn meeting.

Rita May, a three-year-old daughter of dual group 1-winning NZ sire Xtravagant, hasn’t started since capping an impressive first prep in late January with a dominant win at Wyong. 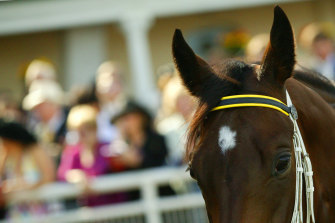 Racing heads to Goulburn to kick off the week on Monday.Credit:Louie Douvis

That was Rita May’s second career win at only her fourth start, and Hawkesbury-based trainer Gary Frazer quickly turned her out, with some winter targets in mind.

After being run down on debut at Gosford in November, Rita May announced her potential next start thrashing a handy maiden field at Newcastle. Not only was she backed from $3.30 into $2.50 that day, she clocked a slick 32.60 secs for her final 600m.

That time was quicker than the class 1 winner over the same trip, Rupertaar, who then went on to win two of her next three.

Rita May had one more run at the provincials in December before a freshen-up and then returning for that even more impressive barrier-to-box win at Wyong, emerging as the only horse all day to break 33 secs for the final 600m.

And her first-up task in a class 2 handicap (1000m) has been made easier with early market rival Cinque Torri set to be scratched after trainer Bjorn Baker preferred Sunday’s Muswellbrook meeting.
But Rita May isn’t the only exciting three-year-old returning at Goulburn.

Kembla-based gelding Steve Steve Steve hasn’t started since a powerful and fast-finishing debut win at Wagga last October, but he has reportedly been working strongly, and was fitted with a nice easy lead-up trial on the synthetic at Randwick.