A Karratha family has been split in two after Western Australia’s border clampdown on travellers from Victoria left the parents stuck in Melbourne after attending a vigil.

Ben Dunn, 39, travelled to Melbourne on Thursday with his partner and two of his children, aged three and 13, to farewell his mother who passed away in regional Victoria. His twins, Zane and Jylah, 11, stayed in Perth with relatives. 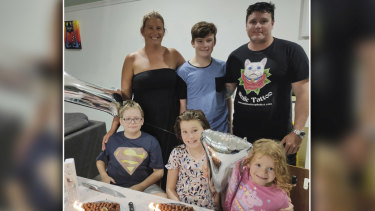 Ben Dunn, 39, his partner Shannon Mitchell, 38, and their children Mailer, 13, and Ivy-Mae, 3, are stuck in Melbourne while their 11-year-old twins, Zane and Jylah, are in Perth staying with an aunt.

Mr Dunn planned for the family to return to WA on Saturday and had been told by authorities they would be exempt from the hard border closure on compassionate grounds, but just hours into their short stay the rules changed, leaving them stranded.

On Friday, the state government announced an immediate clampdown on people who had been in Victoria in the past 14 days as a second wave of COVID-19 cases emerged in the state.

“It’s their place of residence, it would be understandable if it was me trying to come over there, but they live there and they didn’t bring all their kids over, which is upsetting,” she said.

“We’re now trying to get them into South Australia so that they can isolate there for two weeks to then come back to WA and self-isolate again for two weeks.”

Ms Nicholson said her and her brother had been “very diligent” to ensure it was OK for the family to travel to Melbourne, with the funeral service provider agreeing to delay the cremation of their mother’s body so the family could inquire with WA Police before flying.

Ms Nicholson said if the family could not be reunited soon, the twins in Perth would be unable to return to school and Mr Dunn's job would be in jeopardy.

Margaret River couple Lee and Rene Matteeussen are also waiting to hear if they will be allowed to return home after submitting an exemption application on June 28 and getting out of Victoria a week later.

The couple had been living and working in north-east Victoria since February, but recently quit their jobs to return home to new positions.

Towing a caravan, they are now staying in a regional area in New South Wales awaiting a response.

“We didn’t want to get stuck in Victoria but now we’re in New South Wales and we can’t proceed any further,” Ms Matteeussen said.

“We feel like fugitives on the run ... it’s being in limbo and what concerns us now is that it’s taken so long we may get caught in New South Wales if cases escalate and they decide to shut here down.

“Then we’d really be stuck and we’d probably not be able to take up our new positions back in WA.” 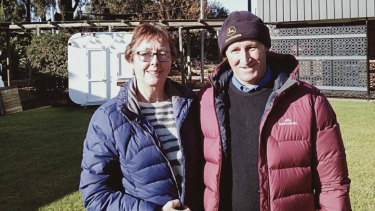 Ms Matteeussen said when the couple applied for a border pass they were told it would take around three days to receive a response.

“It’s been over two weeks now,” she said.

The harsher border rules introduced on Friday effectively banned people who had been in Victoria in the past 14 days from entering the state.

"To enter WA, you must be an exempt traveller," a state government spokeswoman said.

"If a person is an exempt traveller who has been in Victoria in the last 14 days before entering WA, most will not be permitted to enter WA unless they also get an additional exemption.

"People need to prove undue hardship or that there are compassionate grounds for consideration which the WA Police Commissioner would consider as part of the application.

"If you’re simply originally from Western Australia and been residing long-term in another state but decided to leave to come home to WA without demonstrating good reason, that would unlikely demonstrate grounds for an exemption."

The spokeswoman said "we’re in a state of emergency" and and the rules weren't about repatriating former WA residents who were not facing hardship or difficulty, or who had been out of the state for a long time by choice.

Before last week's announcement, nearly 2000 people flew into WA from Melbourne over the previous two weeks.

Entries are now restricted to government officials, military personnel, freight and transport workers and those approved by the Chief Health Officer.