In the space of a month two AFL coaches, who between them have won five of the past seven premierships, have called games their teams have won "horrendous" and a "terrible spectacle". 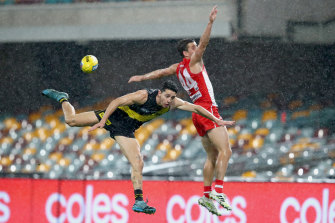 Clearly for Richmond coach Damien Hardwick and Hawthorn’s Alastair Clarkson frustrations with the current game are spilling over to the point both have found themselves canning the game.

But do you want to know what’s really wrong with footy? Yes, it’s the lack of time and space, the fact all players are congested in one part of the ground and scores have seldom been lower. But at the root of all this is coaches have completely abandoned the unwritten rules and common conventions of the game in a bid to find new ways to win.

Unwritten rules and agreed upon conventions exist in all sports and over time, they’re all generally broken. It was once an unwritten rule in cricket not to bowl underarm. In tennis, the common understanding was that the server would not take an unreasonable amount of time to serve between points.

Guess what? These unwritten rules are now written into law. Why? Because they were broken once too often.

Some unwritten rules exist because of the notion of fairness. It’s why it grates many tennis fans to see someone serve underarm. It’s legal, yes, but there’s a general acceptance that the reason the receiver stands so far back in the court is because the server will attempt to beat them with power or placement – with an overarm serve. Serving underarm breaks this common convention.

But other unwritten rules exist to ensure the game is played in its best form and the way it was designed to be played.

Over the weekend, AFL legend Malcolm Blight said on radio that the game’s forefathers created Australian rules football as a positional game with six forwards, six defenders, two wings, a centre and three followers. It was never intended that all players would run to all parts of the ground.

But here’s the thing – there is no written rule confining players within certain areas of the ground after the ball is bounced. The idea of players sticking to their positions was simply an unwritten rule of the game. But not any more. Now players run here, there and everywhere to shut down space and apply pressure.

You may be sitting back scratching your head saying "so what?" Well the answer is simple. When you find loopholes in the game by defying common conventions and unwritten rules, you change the game. If you change it for the better all is forgiven. If you don’t, guess what happens? The rule makers often reintroduce the unwritten rules by writing them into the laws of the game.

Blight reckons the AFL should create new rules to make AFL the positional game it was and which he strongly believes it should be again.

More rules? Yes. That’s what breaking the unwritten rules will cause. After all, doing things differently can be brilliant. But not always.

Sam Duncan is a lecturer in sports media and marketing.

Nagelsmann on rejecting Real Madrid in 2018: I Didn't think going there was the right move
Ole Gunnar Solskjaer: We will see a better Pogba in the coming seasons. He is approaching the peak
Lothar Matteus: Bayern need to make a lot of mistakes to lose to the current Barca
Pedro said goodbye to Chelsea: it Was an honor to play for the club and be a member of a big family
Tammy Abraham: Lewandowski is the best striker in the world
Dinamo Brest will play Astana, Celtic will play CR Reykjavik in the 1st round of Champions League qualification
Ronaldo can move to PSG. Mendes communicated with Leonardo (Foot Mercato)
Source https://www.smh.com.au/sport/afl/footy-s-brave-new-world-doesn-t-make-for-exciting-viewing-20200716-p55cob.html?ref=rss&utm_medium=rss&utm_source=rss_feed