“No worries” should be our national motto. It’s the first phrase I hear when I boomerang back to Australia from Britain each year for family fun in the sun. This laid-back response from an airport official or taxi driver is so much more than a mere saying, it’s an attitude. In a world plagued with well, a plague, and a gazillion other worries, these two little words exude a welcoming, carefree cheerfulness that warms my cockles and lets me know I’ve come home.

It’s usually followed by a bit of wry banter, because Aussie humour is drier than Prince Andrew’s armpit. We do not suffer from an irony deficiency. Although Australians are sceptical – hell, we have chronic scepticemia – we’re not cynical; we do not think optimism’s an eye disease. And it’s this mix of irony, scepticism and optimism which makes Australia my favourite place on the planet. 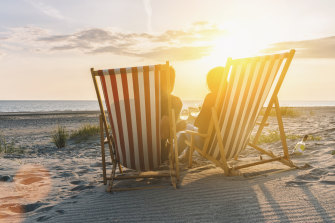 One thing that hits me when I come home is the breathtaking beauty of the place.Credit:iStock

In times of stress Aussies tend to fly into a great nonchalance. “Not bad,” is the equivalent of euphoric rapture in other countries. “Not bad at all”? Well, you’ve basically won the lottery. Being told by a bloke that you’ve “scrubbed up well” is the equivalent of a Shakespearean love sonnet. It’s almost as complimentary as telling him that you’ve “seen better heads on a beer” – because insults are the ultimate term of endearment Down Under. In short, we’re a frank, friendly, funny, inventive people, chock-full of cheeky charm. Apart from that … we’re right ratbags!

The second thing that hits me on arriving home is the breathtaking beauty of the place. I always head straight for one of Sydney’s many exquisite golden beaches to wash away the European winter. After a bodysurf in those fizzing waves, I lie supine on the sand under that big azure sky with its curlicues of clouds. Drenched in sunlight, the eucalyptus-scented wind, warm as an embrace, makes me beam with such joyous effervescence passers-by must think I’ve had a B12 shot.

Australia is an ancient wilderness with the most unique and exotic wildlife; Dame Edna was born here, after all. The pandemic panic means that “flights of fancy” are the only trips Aussies can take right now. But you don’t have to go overseas to be overawed. There’s so much to explore in our own big, beautiful backyard.

Australia is celebrated for its natural wonders – Hugh Jackman’s pecs and Kylie Minogue’s posterior are globally renowned. But there’s also the Bungle Bungles, so astounding they named them twice; the awe-inspiring majesty of Victoria’s giant limestone Apostles, standing guard along the Great Ocean Road; our iconic geographical belly button, Uluru, which is the ultimate rock star. Zero light pollution in the wilderness frontiers of Kakadu and the Kimberley means there are more stars popping out than on the red carpet at the Oscars, a spectacle only out-dazzled by the kaleidoscopic colours of the Great Barrier Reef. I could go on but will quickly run out of superlatives and be forced to nag Stephen Fry into making an urgent lexiconic airdrop.

The whole country is also chockers with legendary laconic locals, national treasures all, and while I’m more of a buried treasure myself, I do delight in unearthing rough diamonds.

Travel restrictions mean this might be the first time in 32 years I haven’t made it home for Christmas. Oh, for the days when “second wave” simply meant catching another breaker at Bondi. I’m pining so badly for a boogie-board with my three sisters, cackling like kookaburras as we skitter down the faces of those perfect waves, that I can almost taste the mangos we devour afterwards – it’s more of a mango facial, really. This is usually followed by a bush barbie or a night spent lounging at an open-air cinema, sharing the stars with squadrons of flying film buffs masquerading as fruit bats.

When European pals ask me what Australia’s like, I reply that it’s just like Britain, just with fewer words for cold, wet and miserable. I think England’s real motivation for building an empire was the desperate desire for a tan. Any Poms we don’t like can be directed to take a dip in the rip, also known as the “backpackers’ express”, and get whisked back to Brighton. Which is the advice
I suspect Indigenous Australians wish they’d given the First Fleeters.

But it’s that Aboriginal love of country combined with cockney humour, Celtic derring-do and the immigrant’s desire to give it a go that have alchemised into the spirit of Australia. Aussies brag that we never brag, but I wish it were not the case so I could boast, hand on homesick heart, that we really are the luckiest people in the world.

This article appears in Sunday Life magazine within the Sun-Herald and the Sunday Age on sale October 25.

Kathy cites her career highlights as once teaching Steven Fry a word, and scripting Julian Assange's cameo in the Simpsons' 500th episode.

Ex-President of Barca Laporta will take part in the new elections
Antonio Cabrini: Maradona would still be alive if he played for Juventus. The love of Naples was strong but unhealthy
Ferguson on Rashford's charity: Fiction for a young man. He should give me some advice
A Preston player who twice touched an opponent's genitals was disqualified for 3 matches for aggressive behavior
Atalanta Director: everything is fine with Miranchuk, there are no symptoms of coronavirus
Kovid mocks the Latvian championship: the team got only 8 people (but still did not finish the match)
Gerard Pique: We all hope that Messi will stay at Barca
Source https://www.theage.com.au/lifestyle/life-and-relationships/for-the-first-time-in-32-years-i-won-t-be-home-for-christmas-this-is-what-i-ll-miss-20201022-p567i9.html?ref=rss&utm_medium=rss&utm_source=rss_feed

I consumed my colleague's hot-choc marshmallow. Should I confess?

Don't bottle it up, there are better ways to sell wine