For years I kept dating the same type of man, until I had a revelation

There is a saying that whatever it is that first attracts you at the beginning of a relationship is likely the same thing that will make you eventually end it. It’s a gloomy adage, if you ask me, but I have to admit it does have merit.

I recently explained this theory to a girlfriend who was going through a break-up. I recall the early days of this relationship and how she was sure this bloke was her “one”. After dating commitment-phobes or emotionally unavailable men most of her life, she had finally met someone who knew what he wanted – and that was her. 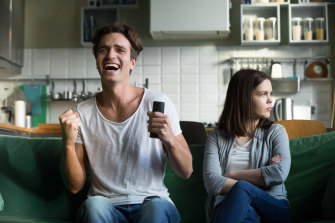 The conundrum of attraction turning to distraction is something many of us know only too well.Credit:iStock

It was refreshing, it was romantic and it was what she needed to feel comfortable and confident enough to let down her defences and give a man her all.

Fast forward two years and all that affection is now not a deal-maker but a deal-breaker. Her ex, she laments, was too jealous, too possessive, too needy – just too much. She couldn’t breathe. He loved her so much it became claustrophobic.

This conundrum of attraction turning to distraction is something I know only too well. For many years I kept dating the same type of man – someone who, I usually realised way too late, was just like my father. You see, my dad suffered a depression that just never shifted. I never saw him truly happy or content, just miserable and bitter, with the supposed weight of the world and all the treachery, betrayal and loneliness it can muster, constantly collapsing his weary shoulders.

Growing up, I thought it was my job to change him, that if I loved him hard enough he would find a way to see some happiness in life. He never did.

Many of my early relationships were about saving similar men: dark, brooding types I felt I could lift out of their melancholy with the sheer force of my will. I gave them my time, energy, compassion, empathy and love, but, again, it was never enough. You have to want to change, and these men didn’t or simply couldn’t.

In the end, I was the one feeling frustrated, exhausted and emotionally spent. Dating dad types took me back to being that little girl again, an abject failure whose love wasn’t good enough. I realised their inability to reach their potential was stopping me from realising my own. I had enough. Never again, I swore.

I retreated from dating until I knew I was strong enough to resist the gravitational pull that these needy, unappeasable men had on my psyche. I was only going to be attracted to happy souls, I told myself, men open to all that life has to offer. And thus, I fell into the beautiful dreamer trap.

The first of these men was so sunny and upbeat, he was constantly singing. Nothing was a hassle, life was beautiful, and the universe would provide everything – you just had to believe that to be the case.

Problem was, the universe didn’t, although it might have if he’d stopped playing video games long enough to seize the day, or at least get a job.

When I realised he was spending so much time with me because he didn’t have a home of his own, and that his endless generosity came at my expense, I started to rethink the perennially upbeat sort. It took two more cheery, carefree types before I finally said, “Enough!”

Today, if someone so much as whistles in my presence, I cringe and place a cautious hand on my wallet. Now, I don’t try to save others, or expect them to save me.

So yes, the first thing that attracts you to someone is often the very trait that will drive you crazy in the end. “Be careful what you wish for” is another useful adage, only these days I know that the sense of contentment I’ve always craved is mine and mine alone to realise.

This article appears in Sunday Life magazine within the Sun-Herald and the Sunday Age on sale July 12.

Marotta on the match with Bayer: I am very optimistic. Inter wants to win the Europa League
Manchester United are unhappy with the way Borussia was leading the negotiations for Sancho. The Germans did not want to communicate directly
Liverpool have announced the purchase of defender Tsimikas from Olympiakos
Bordeaux appointed ex-assistant Blanc Gasse as head coach
Sterling on the win over Real Madrid: Manchester City were incredibly hungry. We have the strength to succeed in the Champions League
Galliani about Pirlo in Juve: Andrea was laughing like a madman when I called to congratulate him
Villarreal will pay no more than 20 million euros for Valencia captain Parejo and midfielder Coquelin
Source https://www.smh.com.au/lifestyle/life-and-relationships/for-years-i-kept-dating-the-same-type-of-man-until-i-had-a-revelation-20200709-p55af6.html?ref=rss&utm_medium=rss&utm_source=rss_lifestyle