Former Newcastle and Gold Coast halfback Beau Henry has come under fire after being sent off for smearing his blood on an opponent in a Presidents Cup game.

Henry was playing for Wentworthville in their round-three 53-16 loss to Glebe Burwood Wolves on the weekend when the incident occurred. The referee sent Henry off in the Henson Park fixture, part of a semi-professional NSWRL competition established after COVID-19 shut down the NSW Cup and Ron Massey Cup tournaments.

Henry, who captained the Magpies in their Ron Massey Cup grand final win over St Mary’s last year, was charged with grade one contrary conduct. The 30-year-old accepted the early guilty plea and the one-match ban that will go with it. Had he not had previous carryover points, he wouldn't have missed a single game.

Henry injured his nose in the lead up to a try scored by another former Titan, Wolves outside back John Olive. As Olive’s teammates raced in to celebrate the try, the game footage - streamed on the NSWRL’s Facebook page - appeared to show Henry wiping the blood from his face onto opposition player Addison Demetriou.

Henry was sent from the field after Addison complained to the match official. Blood could be seen coming from Henry’s face as he came from the field.

Commentators Jamie Soward and Shaun Timmins were initially unsure why the 30-year-old half was given his marching orders, believing it was punishment for backchat. 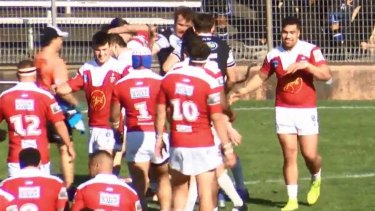 “Beau Henry, some ill discipline. Not what you want when your side is under the pump at this time of the game,” Timmins said in commentary. "Is it 10 [in the sin bin] or is it the blood bin?”

A few moments later, Soward added: “Beau Henry was sent off. You’d have to think it was for giving the referee a bake, but he’s been sent off from the ground and will not be back."

Glebe officials declined to comment but were seething about the incident, privately believing a season-long suspension would be a more appropriate sanction given the current coronavirus situation and the biosecurity protocols in effect at NRL level.

“That sort of behaviour is unacceptable at any time, but was dealt with in accordance with the rules,” said NSWRL CEO David Trodden.

Former referee and NRL match review committee boss Greg McCallum said the “dumb” act would have attracted a longer suspension had it happened in the NRL.

“The NSWRL have worked really hard to get the footy back on … so they would be very disappointed. The match review committee is an independent body and it views things in isolation to what sometimes the feeling of the peak body is.

“I just think it’s an unprofessional thing to do in the current environment. It’s just dumb.”

When contacted by the Herald, Demetriou said he would call back but couldn’t be reached again on Tuesday.

Fati scored 3 goals in 2 La Liga matches. He has 10 goals for Barca in 26 League games
Dest about Barcelona: It's an honor to play for the best team in the world
PSG are set to sign AUAR in the summer of 2021. Arsenal and Juventus are Interested in the player
Juve offered Fiorentina Rugani and De Sciglio as part of the payment for Chiesa. Violets want Demiral
Messi and Ronaldo have not seen each other for more than two years, and now they are heading to the Champions League. According to personal meetings, Leo takes out the opponent with a break
UEFA returns fans to the Champions League and Europa League, but empty stands will remain - in England, Spain, Italy and other countries local bans are in force
Zhivoglyadov about Champions League: Loko got the strongest teams of their leagues. Bayern writes a new story
Source https://www.smh.com.au/sport/nrl/former-nrl-halfback-cops-ban-for-smearing-blood-on-opponent-20200804-p55ij1.html?ref=rss&utm_medium=rss&utm_source=rss_feed